On this date in Razorback history, April 7 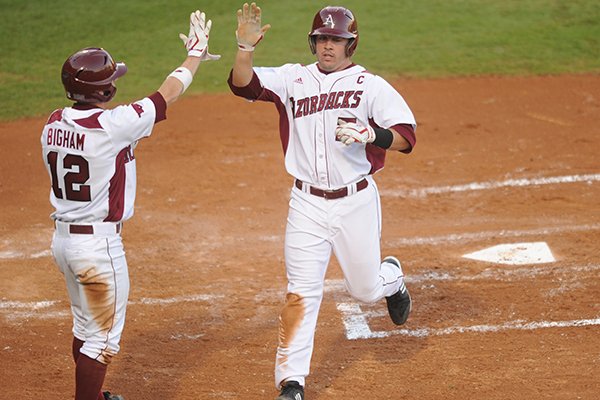 Arkansas third baseman Zack Cox (7) is congratulated by second baseman Bo Bigham after they scored during the first inning of a game against Saint Louis on Wednesday, April 7, 2010, in Fayetteville.

Arkansas defeated Saint Louis 32-8 in seven innings during a midweek game at Baum Stadium. The coaches agreed beforehand to a run rule of 10 runs through seven innings.

The game was over after the first inning when the Razorbacks put their first 12 hitters on base and scored a program-record 14 runs in an inning. Saint Louis starter Mike Schrader failed to record an out against six hitters, and Arkansas batted around twice in the inning.

"The first inning was incredible," Arkansas coach Dave Van Horn said. "We had guys who just had tremendous at-bats. We got on a roll and just kept swinging."

The Razorbacks recorded 30 hits in the rout, including home runs by Brett Eibner, Bo Bigham, Matt Vinson and Collin Kuhn.

Arkansas' 32 runs were one shy of the school record of 33 scored against Southwest Baptist in 1984. That game's 37 combined runs had previously been the record for a game involving the Razorbacks.

Other notables from the Saint Louis game: 39 different players saw game action, including 12 pitchers; and Arkansas scored at least one run in all six innings it came to bat.

The game did not come without some bad news for the Razorbacks, who lost starting outfielder Jarrod McKinney to a torn ACL while he tracked down a ball in the fourth inning. McKinney had started 16 of the team's previous 28 games, but was a defensive replacement against the Billikens.

The win over Saint Louis was the third in a 13-game win streak for the Razorbacks, who finished the year in a super regional. The Billikens went on to win the Atlantic 10.