Razorbacks to play in Kansas City, Maui in future years 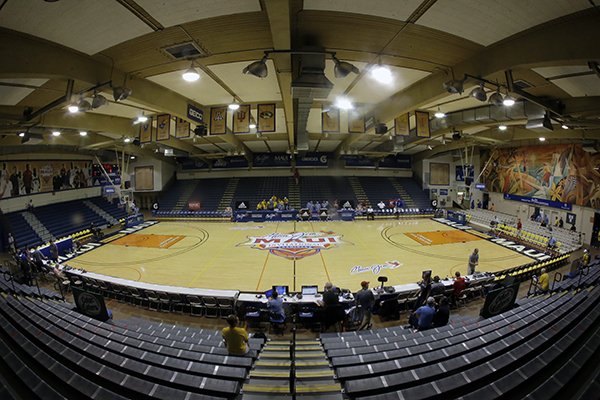 Lahaina Civic Center is shown before the start of the NCAA college basketball games at the Maui Invitational Monday, Nov. 21, 2016, in Lahaina, Hawaii. (AP Photo/Rick Bowmer)

FAYETTEVILLE — Arkansas’ basketball team is scheduled to play in the Hall of Fame Classic and Maui Invitational in future years.

Teams have not been announced for those events in those years. Arkansas' participation was learned through an open records request.

Both the Hall of Fame Classic and Maui Invitational include on-campus games that precede the tournament portion of the events. Arkansas will play four nonconference games as part of both events.

The Maui Invitational is considered one of the premier early-season college basketball tournaments and is played at the 2,400-seat Lahaina Civic Center. Arkansas has played in the Maui Invitational three times - in 1991, 2005 and 2013 - and has a 4-5 record in the event.

All of the Power 5 conferences are represented each year in Maui, while the rest of the field is typically made up of teams from strong basketball conferences like the Big East, Atlantic-10 or Mountain West.

Chaminade, a Division II team from Honolulu that hosts the Maui Invitational, plays in the bracketed field in odd-numbered years, and in the event’s on-campus games in even-numbered years.

The Razorbacks have never played in the Hall of Fame Classic, which was founded in 2001 and is played as part of the induction weekend for the National Collegiate Basketball Hall of Fame.

The Hall of Fame Classic typically includes at least three teams from Power 5 conferences and is played at the 18,972-seat Sprint Center in Kansas City.

Arkansas hasn’t played in Kansas City since 1995 when it defeated Memphis and Virginia during the NCAA Midwest Regional.