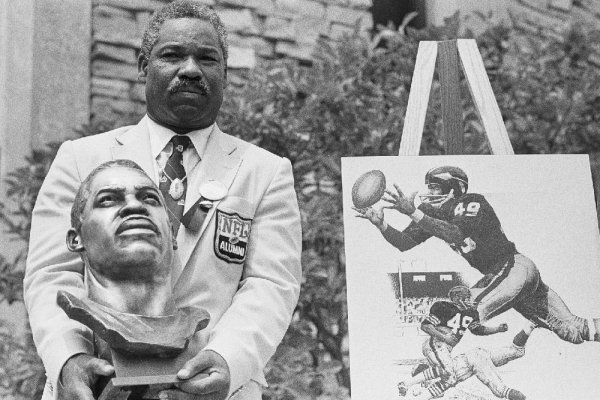 Former Cleveland Browns and Washington Redskins halfback and wide receiver Bobby Mitchell poses with his bronze bust after being inducted into the Pro Football Hall of Fame in ceremonies in Canton, Ohio, July 30, 1983. (AP Photo/Gus Chan)

He was one of the greatest athletes in Arkansas history.

Yet, most in the state 40 and younger know little about Hot Springs native Bobby Mitchell.

Mitchell was born in 1935, and because he was African-American, he played football at segregated Langston High, which won the Arkansas Negro State Championship during his senior season.

He played every sport, and he was a world-class hurdler and good enough at baseball to be offered a contract by the St. Louis Cardinals after he graduated from high school.

Mitchell and his family wanted him to go to college and play football and run track. In those days, that meant Arkansas A&M — now UAPB — or going north.

Mitchell wanted to play at the highest level, and he chose Illinois, where he played halfback and became known for long runs and big catches.

After his senior season, he played in the College All-Star Game, where he had touchdown receptions of 84 and 18 yards. The college kids beat the defending NFL champion Detroit 35-19.

Mitchell was drafted by the Cleveland Browns in the seventh round of the 1958 football draft.

He started at halfback as a rookie, lining up in the backfield with Jim Brown, one of the all-time football legends. Mitchell was destined for greatness, too.

After four seasons, he was traded to the Washington Redskins, becoming the first African-American for that franchise.

In his first six seasons with the Redskins, he never had a season with less than 58 catches.

He became a scout for the Redskins and worked his way to assistant general manager.

In 1977, he was inducted into the Arkansas Sports Hall of Fame, and he joined the Pro Football Hall of Fame in 1983.

After his retirement from the Redskins, he and his wife Gwen, an attorney, stayed in the D.C. area. He worked with numerous charitable organizations.

During his career, he always listed Hot Springs as his hometown, and returned to the area often.

Mitchell died Sunday at the age of 84, but his memory will live forever in the D.C. area.

He also should be remembered as one of the greatest athletes in Arkansas history.

Several emailers inquired about Eddie Sutton’s coaching tree legacy, and within hours a tweet from the Oklahoma State basketball office filled in the blanks.

Seven are currently head coaches in college or the NBA.

Last night would have been the NCAA men’s basketball national championship game in Atlanta, but as everyone knows the tournament was canceled.

Historically, the college team to win the last game is the national champion.

That could have been Mike Anderson and St. John’s, who were leading Creighton 38-35 at the half on March 12. That’s when the Big East Tournament was canceled, and the teams didn’t get to finish the game.

One thing is for certain: Arkansas and Georgia were the only teams to have winning records in the SEC Tournament at 1-0.