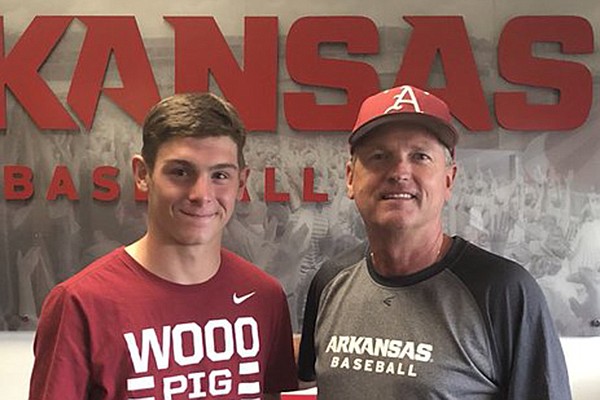 FAYETTEVILLE — Dylan Leach observed from afar as freshman Robert Moore quickly grew into a valuable player on the University of Arkansas’ baseball team this year.

Now Leach, a 5-11, 190-pound, 17-year-old catcher from Carthage, Texas, is planning to follow Moore’s path to the Razorbacks.

Leach said Wednesday he will graduate high school early and enroll at the UA a year earlier than expected. Originally committed to the Razorbacks’ 2021 recruiting class that would be eligible to play in 2022, Leach now hopes to be in the mix for playing time next season.

“We kind of said, ‘Why stay in high school a year and the drafts are going to get all messed up, when we can go to college a year early and get three years under your belt and get drafted?’” Leach said. “We just kind of looked into the future and I want to play for Arkansas so bad it’s not even funny."

Moore graduated high school in December and enrolled at the UA in January, and quickly turned heads with strong play at the plate and in the field. He was the team’s opening-day starter at second base.

Moore batted .317 with 15 RBI and had a .403 on-base percentage in 16 games for the Razorbacks. He earned a national player of the week award from Perfect Game, was named the SEC player of the week and freshman of the week in separate weeks, and had a defensive highlight featured as one of SportsCenter’s top 10 plays of the day on Feb. 22.

Leach is taking Moore’s example a step further. Moore graduated high school midway through his senior year, but Leach plans to earn his diploma this summer and enroll in college by August.

That would allow him to go through fall practice with the Razorbacks, who could lose starting catcher Casey Opitz, a junior, to pro baseball this summer.

A little sad to say goodbye to Carthage a year early, but super happy to say I’ll be saying woo pig sooie as an Arkansas razorbacks baseball player a year earlier than planned! God’s plans are always greater than I could’ve imagined! @RazorbackBSB @DulinsTX @PBR_Texas @Texas_PG

Arkansas had two other catchers on its roster this season, freshmen Dominic Tamez and Cason Tollett. Tamez started once and was a late-game replacement at other times, while Tollett played in just one game because of an arm injury.

Leach said he had spoken to Arkansas assistant coach Nate Thompson about enrolling early for a while, and spoke with Arkansas coach Dave Van Horn about it recently. He finalized his decision this week.

“Everybody is excited,” Leach said.

Leach committed to Arkansas following his freshman season in 2018. He also had drawn interest from TCU and Louisiana-Lafayette at the time.

He plans to sign a letter of intent for the Razorbacks later this spring despite never going on an official visit to Fayetteville. He has visited unofficially and attended camps at Arkansas.

As a sophomore last year, the switch-hitting Leach was all-state and his district’s most valuable player when he batted .472 with 6 home runs, 10 doubles, 5 triples and 45 RBI. He also stole 13 bases.

“I don’t know exactly how fast Dylan is, but he runs the bases so well,” Carthage assistant coach Mark Brown said. “He’s such a cerebral player and knows what he’s doing.

Leach played shortstop as a sophomore because Carthage had a senior catcher. He played mostly behind the plate before his junior season was suspended because of the coronavirus pandemic.

“To know he won’t be back next year and we’ve lost part of the season this year with the virus, it’s just disappointing because Dylan is the kind of guy that when you go to the park, he’s a great, great kid to be around and he's a leader on and off the field,” Brown said. “At the same time, you're excited for him. You can't be unhappy because we're here for the kids to go off and do great things, and he's going to get to go off and do some great things.

“I think his maturity level is really high. I don’t see him having any trouble.”