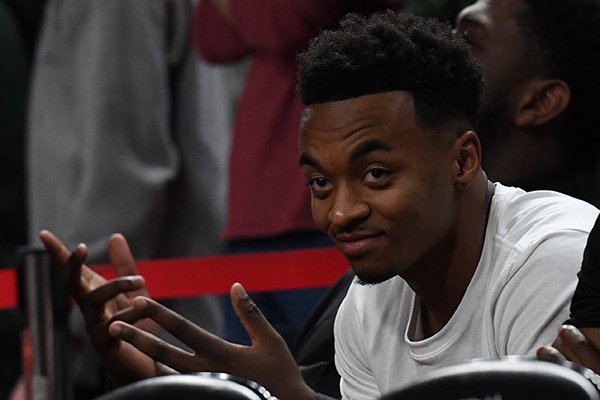 Hill, 5-10, 182 pounds, signed with Arkansas during the early signing period in November 2018 after committing to former coach Mike Anderson on Feb. 14, 2016. He enrolled in January 2019 and redshirted during the second half of the season.

When he arrived in Fayetteville, he was reunited with former 17-under Joe Johnson Arkansas Hawks teammates Isaiah Joe, Ethan Henderson and Desi Sills.

He entered the transfer portal on June 20 after Anderson was fired in March and Eric Musselman was hired in April.

Hill chose to transfer to Salt Lake Community College, where he averaged 13.9 points, 4.3 assists, 3.2 rebounds and 1.2 steals. He was named first team Junior College All-American and Region 18 Player of the Year.

Because of the coronavirus pandemic, Hill pledged to Murray State sight unseen because of the NCAA dead period that was put in place March 13. He's confident he made the right decision after getting to know Coach Matt McMahon and his staff.

"Just because of the relations Coach McMahon and I built over the last few months, and the other people on the coaching staff," Hill said. "I just became close with those guys, and I'm really comfortable around them."

The Racers have gone 77-20 overall and 47-7 in Ohio Valley Conference play the past three seasons, including 23-9 and 15-3 in conference this season. Style of play and Hill's ability to flourish in a system that puts a heavy emphasis on guard play helped him make his decision.

Hill, the son of former Razorbacks assistant football coach and San Jose State head coach Fitz Hill, was a standout at Little Rock Christian who averaged 17.5 points, 4 rebounds, 3.1 assists and 3.2 steals as a junior before skipping his senior season to enroll at Arkansas early.

He said he has matured since his departure from the Arkansas program.

"I definitely grew up during this process because it definitely wasn't something I was planning on happening, but I didn't let it get me down. I just kept pushing, kept working out and in the end it worked out for me," Hill said.

Hill flew back to Salt Lake City on Monday and was one of only about six others on his flight.

"It's super strange," Hill said. "We got to the airport early for me to go through security, but there was only one person in line. Then I went to sit at the gate, and there was no one at the gate. So it was super different."

When reflecting about what has transpired since June of last year to now, Hill said he has learned several things while relying on his faith.

"I would probably just say everything isn't as bad as it seems," Hill said. "You may get to a point in your life where you feel like, 'Why is this happening to me?' But it's all for a greater cause, all for something bigger.

"In my opinion, if you stay in God's purpose and in God's plan and keep your life going the right way, everything works out the way it's suppose to be anyway. Everything happens for a reason."