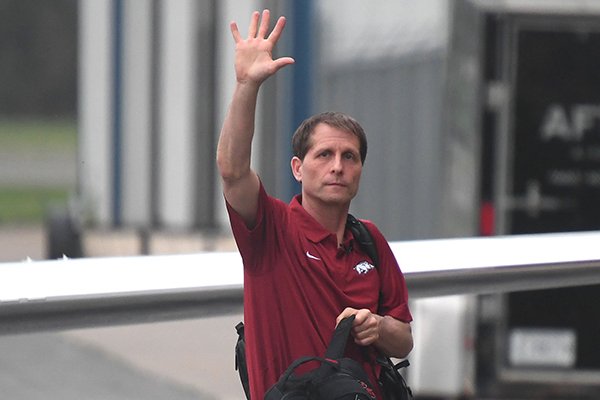 FAYETTEVILLE -- A year ago today, Eric Musselman and his family were calling the Hogs on a stage in Walton Arena.

It was Musselman's introductory news conference as the University of Arkansas basketball coach, and he was joined by his wife Danyelle; sons, Michael and Matthew; and daughter Mariah.

"We can't believe how fast the time has gone by," Danyelle Musselman told the Democrat-Gazette on Monday. "It's crazy."

Eric Musselman led the Razorbacks to a 20-12 record and an 86-73 victory over Vanderbilt at the SEC Tournament before the college basketball season suddenly ended because of the coronavirus pandemic.

"I'm really proud of the effort and everything we got from the team this season," Eric Musselman said Monday. "I'm looking forward to continuing to build for Year Two."

The news conference a year ago was Musselman's second trip to Arkansas, the previous one being in 2015 when he was an LSU assistant coach and the Tigers beat the Razorbacks 81-78 in Walton Arena on a last-second three-point basket by Keith Hornsby.

Danyelle Musselman also had visited Arkansas once -- for a family reunion in Magnolia where her father, Keddie Sargent, was born -- but she was so young she doesn't remember the trip.

But the Musselmans made the move from Reno, Nev. -- where Eric Musselman had been Nevada's coach for four seasons -- to Arkansas without hesitation.

Coaching the Razorbacks in the SEC was an obvious step up, and Musselman was used to moving because he was the son of a well-traveled coach, Bill Musselman.

Danyelle's father worked at Ford, and the family often moved as he was transferred to jobs within the company. She also moved frequently because of her work as a television broadcaster with ESPN, Fox Sports and the NFL Network.

"Neither of us was raised like your average person because we both moved around a lot," she said. "Before I met Eric, I had probably lived in 10 different states. So I grew up moving. Then when I became a sports anchor, it's very similar to being a coach where you move around to different markets as you try to get better jobs.

"So that's how I was raised. Then Eric was raised the same way being the son of a coach. Neither one of us is scared about moving somewhere we've never been before. It's just kind of normal."

The Musselman family spent their first few days in Arkansas at the Inn at Carnall Hall on the University of Arkansas campus.

"My wife and daughter and two sons would go to bed about 10:30 p.m.," Eric Musselman said. "I'd walk up and down campus and make phone calls until about 2 a.m. trying to figure out what the staff was going to be and calling recruits."

After a week, Musselman's family returned to Reno and he moved into an apartment.

"This first year has been crazy, just because whenever you take a new job, it's mass chaos for about three to four months, in the fact that you're moving across the country and you have to be separated as a family," Danyelle Musselman said. "You're getting ready to completely change your life.

"For me, just a tough stretch because I was getting the house [in Reno] ready to sell. I was trying to find a new home in Fayetteville. One of my stepsons was finishing up his graduate degree, and the other was finishing up high school.

"There are so many moving parts. Then by the time we finally got moved into our new home in Fayetteville, it was summer, and we were just trying to get acclimated to Arkansas, meet the team.

"Everything in the first year happens at almost warp speed. Then before you know it, the season starts."

Danyelle Musselman worked out with the Razorbacks on Fridays during the preseason -- when the team would do non-basketball conditioning drills -- to become better acquainted with the players.

"During the summer, Eric likes to try out a whole bunch of different workouts," she said. "So I jumped in a hot yoga class with the team. I jumped in a spin [stationary bicycling] class.

"It's fun for me because I like to work out, but it's also a chance for me to get to know the guys."

Eric Musselman said the workouts were vital for building a family atmosphere for the team, which includes his wife.

"I do think it's important that Danyelle has a relationship with our guys and knows them as people and that they feel like they can talk to her about stuff," he said. "I want them to know they can come over to the house and hang out and relax and kind of get away from basketball.

"I think Danyelle's as important as anybody in the program, because she's part of recruiting, she's part of balancing me. After losses, she handles me better than anybody."

Musselman said he and his wife love their neighborhood in Fayetteville, where they've chosen to live with their 10-year-old daughter.

Michael Musselman works on his father's staff as director of recruiting, and Matthew is attending college at the University of San Diego, his father's alma mater.

"Knowing that my wife and my daughter love where we're living is really important," Eric Musselman said. "When we're working at the office or on the road, it's great to know they're around wonderful people they've developed great friendships with. I think that's probably the coolest thing about our move here."

Danyelle Musselman said the family couldn't have chosen a better place to live.

"We picked it because we love the house that we found, but the neighborhood has so many kids in it that are right around Mariah's age," she said. "Literally since the first week we moved in, she was outside and making friends.

"Our neighbors, right from the start they were just so open to helping and being friendly, being kind. One neighbor had a welcome to Fayetteville party. They just immediately made us feel right at home."

Danyelle Musselman was working for Fox Sports in Los Angeles in 2008 when she met Eric Musselman -- who at the time was between coaching jobs and attended a media panel discussion that she was hosting.

"We ended up meeting afterward, and we talked, and one thing led to another," she said. "Here we are 11 years later married with a little girl."

After Eric Musselman got into college coaching as an assistant at Arizona State in 2012, Danyelle decided to give up her broadcasting career with Mariah 2 years old at the time.

"It was a tough decision," she said. "When it was just Eric and myself, it wasn't hard, because we both were busy and I traveled a lot and it was fine. But once we had Mariah and she started getting older, it was too much chaos in our home life for me to be traveling all the time.

"When it came down to it, I just knew I had to make a decision about how I wanted to raise my family so I'd be able to spend time with them. I decided to take a step back, and I have not regretted that.

"I know it was the right thing to do. I look back at that time and feel fortunate that I had the opportunity to do something I truly loved in life. If it's meant to be, then I might end up getting back into [broadcasting] in some way, shape or form. But if I don't, I'm fine with that, too."

Eric Musselman said he appreciates what his wife did for their family.

"That's motivation because she had a good job and made good money," he said. "So I have an obligation to make up for what she gave up."

Danyelle Musselman got back into interview mode Sunday night when she hosted an Instagram chat with her husband and asked him questions that had been submitted by fans.

"That was my idea," she said. "We know people are missing sports, and we wanted to connect with the Arkansas fans and allow them to ask questions.

"I definitely enjoyed it, and I think the people who tuned in and were asking questions enjoyed it, too. We were only on for 30 minutes. We could have gone on for two hours there were so many questions. It was really fun to see the interaction."

Eric Musselman said he and his family got a taste of the intensity of Arkansas fans during the 2019 baseball season when they attended some games at Baum-Walker Stadium.

"Coach [Dave] Van Horn's teams are so good and the crowds are so awesome," he said. "It's something you don't expect because there are a lot of college baseball programs that only have about 200 people at a game.

"So we were shocked by seeing thousands of fans at Arkansas games. My son [Michael] said it best. He was like, 'Dad, this is like a football atmosphere.' "

Danyelle Musselman said after so many moves, she hopes Arkansas is her husband's final coaching stop.

"Honestly, that would be a dream come true," she said. "We'd love it if our daughter could spend all of her school years here. How great would that be?

"From the very first week that we were all here together and Eric would come home, I told him, 'You better win a lot of games, because I don't want to go anywhere else.' "

Eric Musselman said he wants Arkansas to be his last coaching job, too.

"We're really fortunate to be here," Musselman said. "When the phone rings and it's a recruit calling me back, I'll look at Danyelle and she'll say, 'Go ahead and pick it up. We've got to win.' "