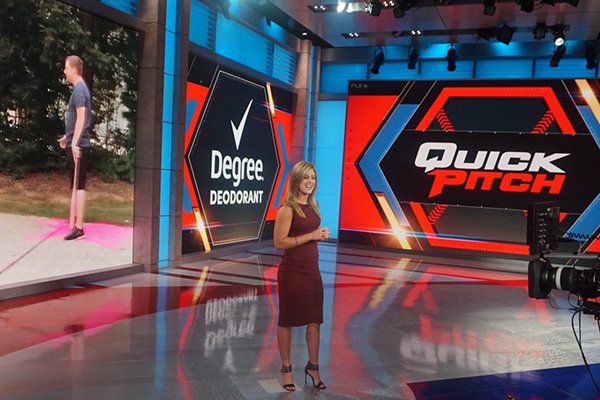 Photo by Courtesy of Sydney Parr

Arkansas softball player Sydney Parr is shown at MLB Network studios in Seacaucus, N.J., in 2017. Parr was an intern for the network.

FAYETTEVILLE — As a former intern for both MLB Network and the New York Mets, Arkansas senior softball player Sydney Parr has a unique perspective on how the coronavirus is impacting New York.

The North Little Rock native was captivated by the Big Apple while spending two summers there.

“I didn’t know what I was going to get because I am from Arkansas and that is not what I was used to,” Parr said. “Getting there, it is an incredible place. There is just so much opportunity, so many things to do and such an adventure. I absolutely loved living there for two summers.

“There is kind of this persona how people are, but every person I came into contact with and created a relationship with was nothing but amazing and so extremely helpful and pleasant.

“But with what is going on there now, just turning on the TV and seeing what those people are having to deal with, it is upsetting and heartbreaking. There is a piece of me that is still attached to New York. I still know people that live there from my two internships and I really hate what they are going through.”

Parr and her teammates are also dealing with the effects of the pandemic as their season came to a screeching halt on March 12, a day after a doubleheader sweep of Kansas.

“It definitely took my breath away,” Parr said. “I sat and had a range of emotions; all sorts - confused and overwhelmed and upset. Because having the 2020 season end abruptly like it did is tough for players and coaches.

“But once I came home and was with my family after the season was officially canceled, I just kind of sat back and had a different perspective, because  with what’s going on in the world and our country, it’s tough....and it really put things in perspective on the significance and the big picture with what is going on. It was extremely hard and you hate to see it.”

The NCAA Division I Council granted all spring athletes an extra year of eligibility last week, meaning Parr can be a senior again in 2021 if she chooses.

“As a senior, you don’t want  your senior season to end the way that it did, but you also don’t want to see your teammates  and other athletes only have three years of eligibility. So I think that the decision to grant everyone an extra year of eligibility is huge. It’s huge for everyone that played sports… I would have been personally devastated to not get anyone eligibility, so I think it’s great. I think they made the right decision.”

Parr is sizing up her situation in regards to returning for another season at Arkansas. Schools can choose whether to give returning seniors anywhere from no scholarship money in 2021, to the amount they were promised for the 2020 season.

Because signifiant amounts of revenue were lost due to this spring's cancellation, funding additional scholarships is a difficult decision on each campus.

“There’s still a lot of logistics to be worked out, but I’m certain and trustful that once Coach (Courtney) Deifel and (athletics director) Hunter Yurachek get the answers that we need - because there’s still a lot of questions to be answered - that they’re going to provide us with great information," Parr said, "and I’m really excited to see what transpires once they do get that information."

Parr is engaged to be married to former Arkansas baseball player Evan Lee on Oct. 24 and has been searching for job opportunities. Lee is a minor leaguer in the Washington Nationals organization.

“I am getting my degree in journalism and I aspire to be a sideline reporter,” Parr said. “I would like to do in color commentating for softball. I want to stay more on the softball, baseball side since the sport is second nature to me.”

The internships have helped get her foot inn the door and allowed her to be around former MLB stars like David Ortiz and Harold Reynolds, and on-air personalities like Kelly Nash.

“They both were amazing opportunities,” Parr said. “At the (MLB) Network, I was very fortunate to work in the news department so all of the on-air talent - Harold Reynolds, Big Papi made some appearances, Kelly Nash - I got to work alongside them. It really helped me understand what all goes into the Network, how they work, how they do their jobs and are on-air.”

Nash, one of the co-hosts of MLB Network’s show Rundown, which features highlights from that day’s game action, took Parr under her wing.

“Some of my most favorite memories were getting to stay up late and have access with Kelly Nash,” Parr said. “There is a show that she does like at 1 a.m. in the mornings, or that she did often.

“After the show, she would mic me up and I would get the hair and makeup and the glam, and would get to go in the studio and run through the script that she did. She would give me pointers on how to improve and how to speak on camera. That memory is just something that I will cherish forever and will think about all the time.”

“With the Mets, I got to work in their community engagement and player development department and just getting to interact with the players and everyone that worked behind the scenes,” Parr said. "Getting to see how the small people that work behind the scenes, how much of an impact they actually have on the game and the entertainment of the fans.

“So getting to do that and just engage in the community is one thing that I absolutely loved giving back to those.”

Parr had the opportunity to live in a pair of picturesque settings.

“The first summer that I interned the Major League Baseball Network, the network is in Secacaus, New Jersey, and I lived right on the river right across from the Statue of Liberty,” Parr said. “It was a beautiful location. I lived by myself in a high-rise apartment that I was fortunate enough I was put in, by my mom. Then with the Mets, I actually lived in Queens.

Parr has spent time this spring working on the HogPod with Bo Mattingly podcast.

“So with those three internships, I feel like I have set myself up for success when my softball career is over,” Parr said.

“I have a handful of opportunities, but right now with everything that has transpired, that’s in a halt. I have put that on hold. Not even on my end of it, from the job market and the people that I was interviewing with and have been in contact with, I don’t know where they’re headed and how all of this is going to affect them as companies and businesses. So right now, everything for me is at a halt and I’m just going to move forward.”

Parr is trying to maintain a schedule of conditioning and getting her softball work in.

“I am trying to stick with my routine and to better myself every single day,” Parr said. “I do an at-home workout, a lot of running and speed work every single day. I am fortunate enough to have the equipment that I need at home to stay on top of my physical workouts, getting stronger and faster. In addition to that, I am still hitting every single day, playing catch with my dad and really just going back to the fundamentals of softball.

“That’s just extremely important to fine-tune things and that’s what I’m focusing on and still doing a lot of homework. I’m just still trying to…grind for whenever the next practice is to come in the future so I’m well prepared and staying in great softball shape.”