On this date in Razorback history, April 9 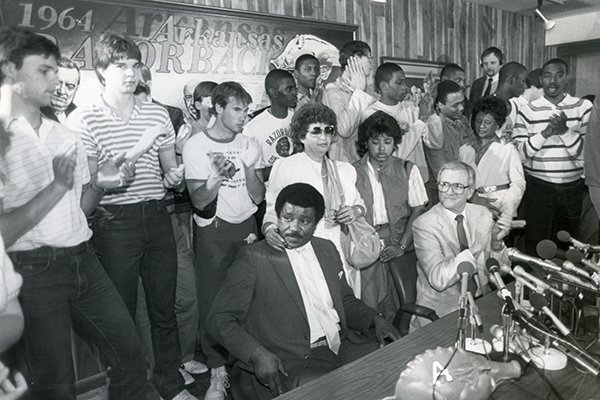 Nolan Richardson has often joked about the simplicity of the resume he submitted to the University of Arkansas in the spring of 1985.

“If you want to win, hire Nolan Richardson,” the coach has often been quoted as remembering what the document said.

Richardson came to Arkansas from Tulsa, where he compiled a 119-37 record and went to three NCAA Tournaments in five seasons. Four months before he was hired by Arkansas, Richardson’s Golden Hurricane gave the Razorbacks a scare in Little Rock, but Arkansas won 70-66.

Richardson was a trailblazer for black coaches when there were few in the sport. He was the first black head coach for any men's team in the Southwest Conference.

In junior college and at the Division I level, Richardson also helped pioneer a new era of transition basketball. His Razorbacks played a style he referred to as “40 minutes of hell” for its defensive tenacity that led to layups on the offensive end.

Richardson previewed the style that would ultimately come to define his hall of fame career on the day he was hired.

Richardson's task at Arkansas was a tall one. He was hired to replace Eddie Sutton, who took Arkansas from a basketball afterthought to a player on the national level.

“My objective in the search was not just hiring someone who could maintain the program Coach Sutton built,” Broyles said at Richardson’s introductory news conference, “but would have the potential of raising it to even greater heights.”

Richardson coached the Razorbacks for the next 17 seasons, furthering Arkansas' profile in the sport. His teams won 389 games, played in the NCAA Tournament 13 times and advanced to three Final Fours.

The Razorbacks' NCAA Tournament record under Richardson was 26-12. During one stretch in the 1990s the Razorbacks won 24 of 30 tournament games.

Arkansas won its first basketball national championship in 1994 and was in the championship game again the next year. It was a goal that Richardson aspired toward on the day he was hired.

“I’m not a politician, so I don’t make big promises," Richardson said. "But one promise I must make is that we will be there. I’m not promising you that next year you’ll be quoting me, but we’re going after the top. We have to.”