Jones signals lean toward the NBA 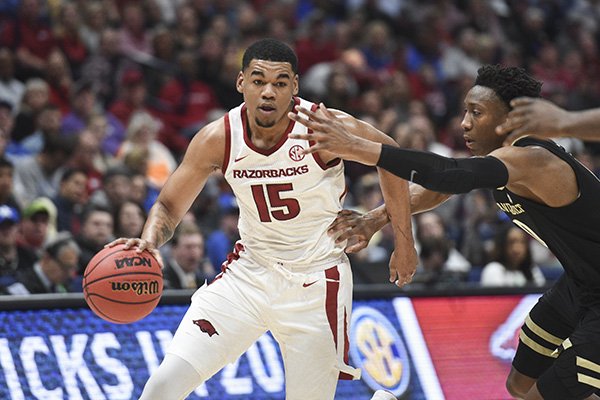 FAYETTEVILLE -- Mason Jones said Thursday in a radio interview that he expects to keep his name in the NBA Draft and not return to the University of Arkansas for his senior season.

"Right now, I'm just taking it day by day, but there's a good chance that I'm going to stay in the draft and take on bigger challenges," Jones said on The Morning Rush with co-hosts Tommy Craft and Tye Richardson.

Jones, a 6-5 guard, averaged 22.0 points in his junior season under Coach Eric Musselman to become the first Razorback to lead the SEC in scoring. He also led Arkansas in rebounding (5.5), assists (3.4) and steals (1.6).

Musselman, who led the Razorbacks to a 20-12 record in his first season at Arkansas after coaching Nevada for four seasons, previously was an NBA head coach with Golden State and Sacramento.

"I feel like Coach Muss has put me in a good position where I can go out there and continue my journey and continue to show what my worth is," Jones said. "I just want to thank Coach Muss and the coaching staff for doing everything they did for me this year and showing me how to be a pro.

"Coach Muss is a great coach. He did a lot of things behind the scenes that really helped ... I just feel like right now on my journey, it's time for bigger challenges, and I'm ready to see where God takes me."

Jones, who declared for the draft March 27, said he has not signed with an agent.

College players with eligibility remaining have until April 26 to declare for the draft and a June 3 deadline to withdraw.

Jones is among 99 college players as of Thursday with eligibility who are early draft entries.

The draft is scheduled for June 25 with two rounds and a total of 60 picks.

Arkansas guard Isaiah Joe, who averaged 16.9 points this season as a sophomore, is among NBA Sports' 30 notable college underclassmen who have not yet declared for the draft.

"A big decision is coming for my guy Isaiah, so I just want to let him make his decision freely, and I want him to make the decision for him."

NBA teams aren't bringing in draft prospects for workouts as they normally do because of the coronavirus pandemic, but Jones said he isn't letting the situation keep him from maintaining his conditioning at home in DeSoto, Texas.

"I'm just staying in shape and being ready, making sure I eat right still, make sure I still run, still do my push-ups and sit-ups," Jones said. "I'm just making sure I stay safe out here through everything that's going on right now. I just want to stay humble and stay hungry."

Jones was The Associated Press co-SEC player of the year along with Mississippi State sophomore forward Reggie Perry. He also was an AP honorable mention All-American, but his name isn't listed in mock drafts -- even drafts that include two rounds.

But Jones has made a habit of exceeding expectations.

Arkansas was the only major college to offer him a scholarship after his freshman season at Connors State College in Oklahoma. He averaged 13.6 points for the Razorbacks as a sophomore, then took his game to a higher level as a junior.

During Jones' radio interview, he thanked the previous Arkansas coaching staff -- coach Mike Anderson and assistant T.J. Cleveland, both now at St. John's -- for believing in him.

"In junior college, I just went in there with the mentality that I wanted to be the best," Jones said. "That's where I started to figure out my stuff and figure out that I really had the talent that I'm ready to let loose.

"Then just being blessed with the opportunity to go to Arkansas, I want to thank Coach A and Coach Cleveland for giving me a late scholarship and believing in my talent.

"I knew that I was a high-major player, but I knew there was a lot of doubt about me. I just wanted to show a lot of people that Mason Jones was real and that I wasn't really just a player to come in and sit on the bench.

"I was blessed to have a year with Coach Muss. God blessed me with bringing Coach Muss in, an NBA coach that was a player's coach."