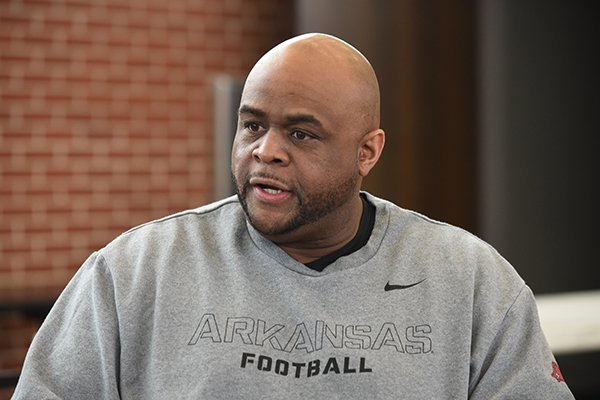 Rice, 6-6, 279 pounds, of Lynchburg (Va.) Liberty Christian Academy, called Davis on Tuesday and learned the Hogs were extending a scholarship offer to him. He holds 12 other offers, including ones from Virginia, Florida, Florida State, Miami, Southern Cal, Oregon, Tennessee and Virginia Tech.

"He was saying that he wants to build a relationship with me and it doesn't happen overnight," Rice said of his 30-minute conversation with Davis. "He was really honest. Yeah, I might be good on the high school level. He was saying in the SEC everybody is good and there's a big difference. Everybody is the same size and everybody is good, but people with a different mindset and that plays real hard truly win games."

Rice said he was impressed with Davis, a Baton Rouge native.

"He was like, 'I have kids of my own and I'll never steer you the wrong direction,' " Rice said. "He wasn't a car salesman. He told me he wants to develop me into the best, not keep me where I am."

Rice also said a good relationship with Davis is a must if he is going to visit Arkansas at some point in the recruiting process.

"Coming from where I live in Virginia, I looked up the time and it's 14 hours and 25 minutes from my house," Rice said. "We have to build a nice relationship because I just can't come to the college whenever I want."

Being in the 2022 class and having 13 offers is humbling to Rice and somewhat surprising.

"I would say, 'Yeah, I grinded for it, I worked my tail off for it, but really why me?' " he said. "God has definitely blessed me."

Rice and his mother watched the movie Greater, which is based on the true story of Brandon Burlsworth, the late Arkansas All-American offensive lineman.

"That was a really good movie," Rice said. "My mom cried."

Rice said his love of football comes from the physical part of the game and the ability for him to receive a free college education.

"I love that I can literally move you around and literally hurt you without getting in trouble, and I love that it's given me a lot of opportunities," he said.

Rice said he is considering being an athletic director when his playing days are over, thanks to Frank Rocco, his high school coach.

"My head coach is an athletic director, too," Rice said. "I really look up to him. Without him, I don't know where I would be. He's helped me a lot, especially during recruiting."