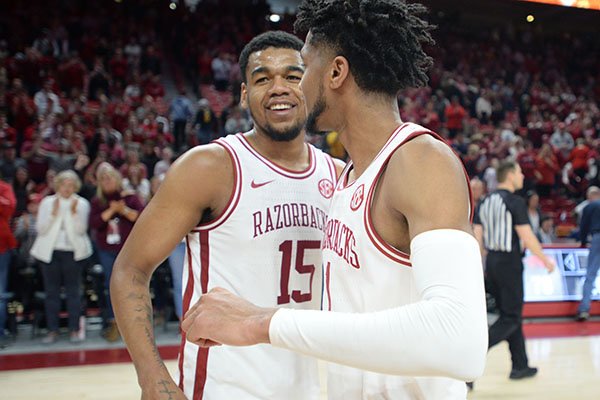 The Razorback Nation is waiting with some anxiety to see what happens with Mason Jones and the NBA Draft that is scheduled for June 25.

There is some concern about Isaiah Joe, too.

It appears both are exploring NBA options, but both are leaving open the option of returning to school to finish rebuilding the foundation of University of Arkansas basketball.

The NBA will draft 30 players in each of its two rounds.

As of Thursday, 99 underclassmen had declared for the draft.

Those 99 include Jones, but not Joe.

Mock drafts see about 25 underclassmen, four or five international players and maybe a college senior going in the first round.

You’ll see more seniors and international players go in the second round. Let’s say another 10.

So that leaves 99 underclassmen so far vying for about 45 draft spots.

Some who follow the NBA closely say it is better to be a free agent than to go in the second round. That way the player can find a team that matches well with his talents.

Only first-round picks get guaranteed contracts.

It was very smart of Jones to leave his options open. Currently, he is absent from mock drafts.

The way he improved from his sophomore to his junior season, if he could improve 20% more as a senior, he probably would be in every mock draft this time next year.

A big plus for Jones and Joe — or all Razorbacks in the future with NBA skills — is Eric Musselman.

Musselman, a former NBA coach, knows what the NBA is looking for, has contacts in the league, and runs his college team like he did his pro teams, complete with written scouting reports on every opponent.

After a game, each player is given a copy of the report and eventually is asked questions after reading it.

When Musselman told his team he was leaving for Arkansas, Brown transferred to Arizona. He sat out last season.

While on the subject of basketball, the SEC has become a coach’s league.

When Arkansas joined the SEC, Nolan Richardson made a long and lasting impression — programs didn’t have to concede the league to Kentucky every year.

At that time, Richardson and Rick Pitino were the big names in the league. Outside of Kentucky, all the schools have experimented and failed before finding their current coaches.

There is not one coach currently in the SEC whom another coach looks forward to coaching against.

No, not even Vanderbilt, who is experimenting with Jerry Stackhouse as its head coach but had a better-than-expected season. The Commodores won only three conference games, but they were against LSU, Alabama and South Carolina.

On a personal note, other than an occasional trip to the store, your trusty scribe is house-bound. But I have enjoyed at least two days at Oaklawn and never left my sofa.

Oaklawnanywhere.com provides everything but a corned beef sandwich.

If you are making a wager, the brisnet past performances are free on the website. All types of wagering (at all tracks that are running) are available.

I can read a past performance, but will undoubtedly come up with the favorite.

So I look at Rick Lee’s picks in this paper and compare them with those provided by the track from Nancy Holthus and Vic Stauffer. If all three agree on a horse, a wager is made. Then you click on video to watch the race.