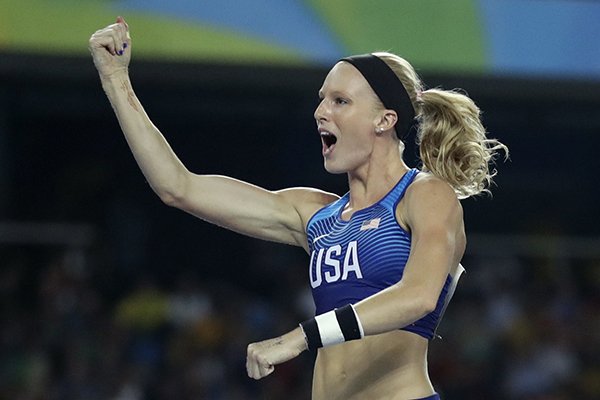 FAYETTEVILLE -- With the University of Arkansas closing its athletic facilities in late March because of the coronavirus pandemic, Sandi Morris needed a new place to train.

So Morris -- who won a silver medal in the pole vault at the 2016 Olympics and gold medal at the 2018 Indoor World Championships -- is going the do-it-yourself route.

Or to be more precise, with assistance from Dad.

Morris -- who as an Arkansas senior won the 2015 NCAA Indoor pole vault title -- and her father, Harry, are building a pole vault pit and 120-foot runway in her hometown of Greenville, S.C.

The construction began March 30 after Morris made the 12-hour drive from Fayetteville to Greenville along with her two Italian greyhounds, two parakeets and a python snake she's had since the sixth grade.

"I've really enjoyed it, and it's been a good distraction because all you hear about every day is covid-19," Morris said. "It just gets exhausting. So it's been nice to have a project to go out and focus on. It's just a really nice distraction as well as planning for the future."

Harry Morris, a hydrogeologist for an environmental company, enjoys carpentry work. He said it's been a labor of love building something with his daughter.

"It's always good as a parent to have an opportunity to spend some quality time with your children," he said. "Not that Sandi's a child anymore. She's a grown woman. But we're happy to have her around.

"We've been very blessed to have the University of Arkansas do all they've done for Sandi. It's an awesome facility there and awesome atmosphere with a great coaching staff.

"But with this crazy covid-19 virus and everything getting shut down, all of a sudden she had nowhere to train. I thought this seemed like a good reason to go ahead and do what we've been talking about doing for a long time."

Morris, 27, and her father have talked about building a pole vault facility in Greenville the past three or four years so that when Sandi visits, she can stay longer because she'll have a place to train.

"You're trying to find a sliver lining in a dark cloud with what's going on around the world right now," Harry Morris said. "This is a good example."

While Morris is back home in Greenville, her husband Tyrone Smith -- a three-time Olympic long jumper for Bermuda -- is in Austin, Texas, where he's working on a masters degree in business at the University of Texas.

After Morris and Smith spent spring break together in Fayetteville, he returned to Austin -- even with classes online -- to focus on his schoolwork.

"We've been doing the long-distance thing for 3 1/2 years years," Morris said. "So we're used to being apart."

Morris, the American record-holder in the pole vault outdoors with a best of 16 feet, 5 inches, plans to stay in Greenville until Arkansas opens up its athletic facilities again.

The 2020 Olympics have been rescheduled for next year, and the Diamond League -- the professional track and field circuit -- has postponed its first six meets through the end of May.

"I need someplace I can stay and train at least through May, and even then it might not be enough time for things to start reopening," Morris said. "You just don't know if that's happening at all this year.

"I knew I needed to have a good long-term plan, and coming back to Greenville was the best option because my parents have got room for me and my pet menagerie."

Morris and her father have spent three to four hours most days the past two weeks working on their project.

"My dad and I are a good team when it comes to carpentry and building things together," Morris said. "He definitely has more skills than I do, but I've already learned a lot as we've built this."

The Morrises have gotten help from three of their neighbors -- using proper social distancing. One of the neighbors builds sail boats by hand.

"We didn't even know this man, but he saw a couple people down on this field building something out of wood and was curious," Morris said. "He was like, 'Whatcha doing?' We told him about it, and he was all for helping.

"He showed us a number of things like how to mark, how to measure [sections of wood] so it matches up perfectly. Little things and specific skills make it so much easier and so much more accurate when you go to put the pieces together."

Morris' mother, Kerry, is a seamstress and has her own home interiors business.

"My mom makes draperies and bed spreads and pillows, everything for your home," Morris said. "My dad spent two years building a stone patio.

"When something needs to be done at our house in Fayetteville, my husband will say, 'Why don't you hire someone to do that?' But we're a family that enjoys doing home projects. Building things is normal for us."

In addition to doing their own home renovations, Harry and Kerry Morris -- who were both track and field athletes at Western Illinois -- helped their other daughter and son-in-law do a makeover with a house they bought in Greenville.

"I think everyone is trying to adapt to what we're going through right now, and Sandi is being creative out of necessity to make sure she can continue training at a world-class level," Harter said. "It's quite a challenge to pull that all together, but her parents have always been super supportive and Sandi is very determined."

On March 30, Morris posted a video on her Twitter account of a hammer flying out of her right hand while she was pounding a stake in the ground to mark where the runway would be built.

"I was like, 'Here, Dad, take a video of this,' and I guess it was my fault because I was trying to hammer in the stake while I was talking," Morris said. "It was hilarious because the hammer slipped out of my hand right when I was saying, 'I'm just trying not to hurt myself.'

"It was a goofy moment caught on camera, and the hammer didn't hit me. Everybody was like, 'Oh, my gosh, are you OK?' But I think they forgot I'm a vaulter. I fling myself through the air for a living."

Morris estimated the materials for the pole vault runway and pit cost $35,000 to $40,000 -- the padded landing area is the major expense -- but most of the items have been loaned, donated or provided at cost.

UCS Spirit, the company that supplies Morris with her poles and manufactures track and field equipment, loaned a pit to the Morrises.

UCS also loaned the standards that hold the pole vault bar. A local company donated wooden pallets -- which the Morrises are using for a base for the pit -- and they got lumber and rubber for the runway at cost.

A local developer, Caleb Freeman, donated the land for the pole vault runway and pit that is part of a neighborhood recreational area that includes a pool, clubhouse and soccer field.

Sandi Morris estimated she is spending $2,000 for the entire project.

"Sandi's a folk hero there in Greenville with all that she's accomplished," said Arkansas assistant coach Bryan Compton, who continues to be Morris' coach. "Everybody knows Sandi and wants to help her out. She's our best vaulter in the United States."

The wooden platform for the runway was completed on Monday, Morris said. When the pit and the rubber to cover the runway arrive, the project will be completed.

Morris hopes to be vaulting by this weekend, though she'll use a short approach to start after having soreness in her left knee at the end of the indoor season when she won at the Millrose Games by clearing a meet record of 16-1 1/4 and won the U.S. title at 16-0 3/4.

A set of free weights and a barbell also recently arrived at the Morris home in Greenville. Morris has set up the weights in her parents' garage so she can work out there in addition to vaulting at the new facility.

"Of course, everybody here in Greenville knows about Sandi with accomplishments at the Olympics and World Championships," Harry Morris said. "So a lot of people in the community are excited we're building this."

Sandi Morris said she hopes the runway and pit will be a benefit to the community and promote pole vaulting.

"We want to do some clinics for high school kids and maybe some summer camps," Morris said. "That's the long-term goal when things get back to normal. We want to share the love with other vaulters."