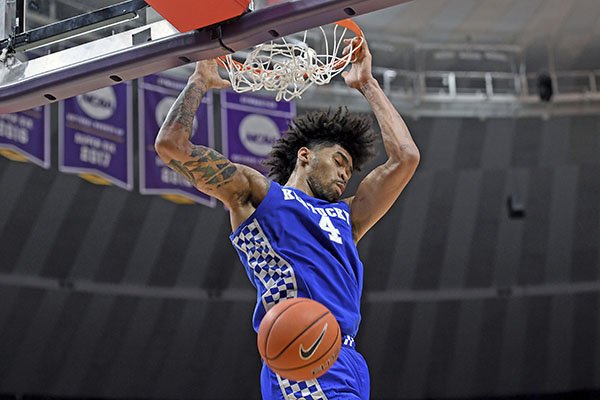 Kentucky forward Nick Richards will enter the NBA draft and give up his final season of collegiate eligibility by signing with an agency.

The 6-foot-11 junior is the fourth Wildcats starter to turn pro. He’s coming off a breakout season in which he was named a first team All-Southeastern Conference selection by The Associated Press and league coaches. His per-game scoring average increased 10 points from his sophomore season to 14.0 while starting 30 of 31 contests to help the Wildcats (25-6) earn the SEC regular-season title before the postseason was canceled because of the new coronavirus.

Richards also ranked fourth nationally in shooting at 64% and made the SEC all-defensive squad with averages of 7.8 rebounds and 2.13 blocks per game.

Richards, from Kingston, Jamaica, thanked Kentucky coaches and teammates for his steady improvement in a statement on Tuesday. He said it’s time to pursue his ultimate dream of being an NBA player and added, “I’m prepared for this step because of my time at Kentucky.”

Florida will have its top scorer back next season.

Forward Keyontae Johnson announced on social media Tuesday that he plans to return for his junior year with the Gators, a huge boost for coach Mike White's program.

“I can’t wait to get back and play with my brothers again next season!” Johnson said on Twitter. “We’ve got unfinished business & the Gators will be ready to go. I’m excited to keep growing on and off the court with Coach White and our coaching staff here & keep playing in front of the gator family.”

Johnson averaged 14.0 points a game to lead the team in scoring, and was second in rebounding (7.1). He also led the team in steals (38), was second in 3-point shooting (38%) and ranked third in assists (49). He played his best basketball down the stretch, notching five double-doubles in Florida's final nine games before the coronavirus pandemic canceled most of the postseason.

Johnson is the second Florida starter to commit to staying in school another season. Guard Scottie Lewis announced last week that he will be back for his sophomore year because "we have some unfinished business.”