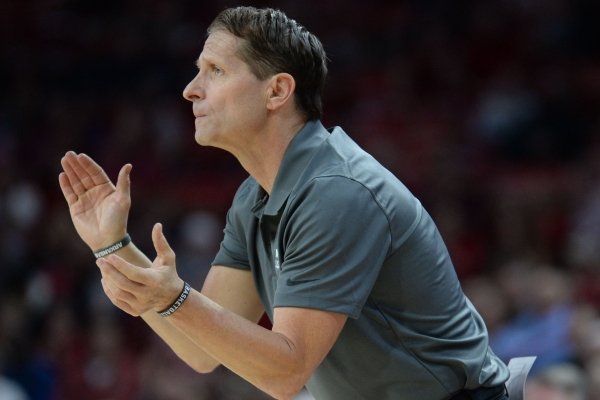 "He's not only a great recruiter, but a great coach, especially with all of the accomplishments he's had," Tate said. "The players he's been able to coach and the many different levels he's been on not only as a coach but as a player as well. Being able to take everything he has from the game and implement into mine and just try my best to be as good as possible."

Tate comes from a basketball family. His father, Jermaine Tate, played for Ohio State and Cincinnati before playing professionally for 13 years overseas. His brother, Jae'sean, was a forward for Ohio State from 2014-18.

"In many ways, he reminds me of the type of player Coach Muss had at Nevada," Biancardi said. "Tough and versatile. Tate influences the game by scoring inside the arc, on the glass and from the defensive end. Tate comes from a strong basketball family."

Tate told Musselman he wanted to be a Hog the night before announcing his commitment to Arkansas.

"I probably wanted to sleep on it and talk to my family all the way through, and they were behind me," Tate said.

"We're all kind of in the same boat, and they had great things to say about coach," Tate said. "They were both great in helping me get this done."

Tate and other transfers have been forced to make decisions without visiting schools, relying instead on virtual visits. Tate praised Arkansas' detailed virtual visit.

"Just very informative," he said. "Coach did a great job himself, too. Whenever I wanted to, showing me on Face Time and showing me in person. They definitely informed me. I was definitely super excited to see the actual things ... like the tutor centers and different places on campus. It was like actually being there."

Musselman mentioned how Tate's ability is similar to Cody and Caleb Martin, the twin brothers who played for Musselman at Nevada and are now with the Charlotte Hornets.

"Coach was very constant in comparing me to the twins and showing some things we can do similar that they did back in Nevada to help my game," Tate said.