On this date in Razorback history, April 16 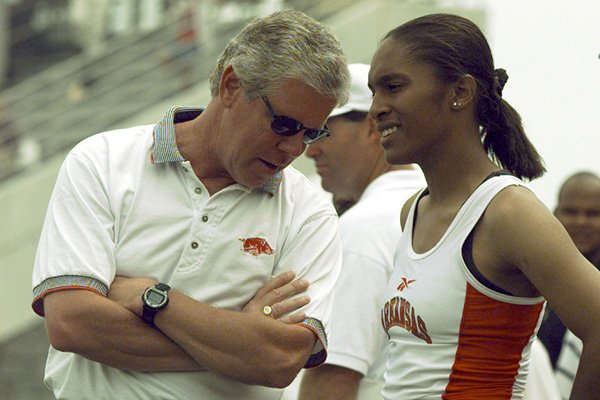 Arkansas coach Lance Harter talks with DeeDee Brown during the SEC Outdoor Track and Field Championships on Friday, May 14, 1999, in Athens, Ga.

Near the height of Arkansas’ dominance in men’s track and field, the women’s program took a major step toward becoming a national player, too, 30 years ago today.

That’s when Lance Harter was hired to replace Bev Lewis as the Razorbacks’ coach in cross country and indoor and outdoor track and field. Lewis, then known by her maiden name Bev Rouse, had been hired as Arkansas’ athletics director for women’s sports a year earlier but continued to coach.

Lewis had been coaching at Arkansas since 1981. She coached the Razorbacks to their first conference championship during the 1988 cross country season.

“I was having trouble juggling the two things,” she said at the time. “We want to be competitive on a national level and the most important thing is hiring a good coach.”

He also brought him with him a lucrative apparel contract with Nike, one of just six coaches in the women’s sport with such a deal. By the time he was hired, Harter had also already been announced as a coach for the U.S. Olympics team in 1992.

Harter was hired over more than 100 applicants for the job.

“We’re determined to build a nationally-competitive program,” Harter said when he was hired, the day after his 40th birthday.

In 2014, Harter was inducted into the hall of fame for the United States Track and Field and Cross Country Coaches Association.

“Lance is the best of the best,” Lewis said when announcing Harter as her replacement. “I feel like I couldn’t have gotten a better coach anywhere. I feel I’ll be able to step back from the track program without any worries.”