Jim Benton was one of first big-play receivers 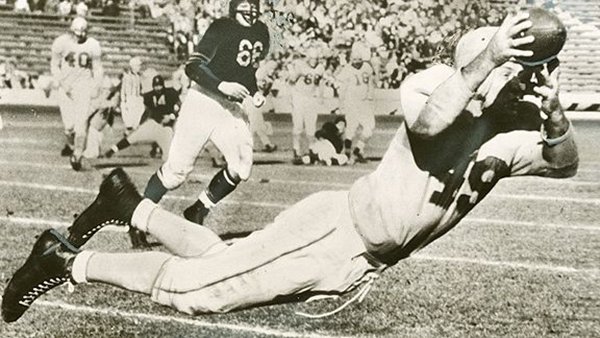 Jim Benton, shown attempting to make a catch in this undated photo, was an All-American as a senior at Arkansas in 1937 before a long NFL career in which he won two league championships.

FAYETTEVILLE — Jim Benton, one of the first great Arkansas Razorback football players in the 1930s, stood out not only as a 6-3 receiver, but also as a player who produced stunning statistical feats for his day that lasted decades.

A native of Carthage in south central Arkansas, Benton played at Fordyce High School before going to the University of Arkansas as a two-sport athlete and breaking the NCAA record for pass receiving in 1937.

That was one of many records once held by Benton, who is ranked No. 8 on the Arkansas Democrat-Gazette’s list of top pro Hogs.

Benton, a member of the UA’s All-Century team released in 1994, left a profound impact on football in the state. He became a consultant, then head coach at Arkansas A&M (later UA-Monticello) before focusing on his business interests.

His legacy was recalled in recent years as Razorback women’s golfer Kaylee Benton, his great-granddaughter, played on Arkansas’ SEC championship team of 2018 and on its NCAA final eight team last year.

“He was so far ahead of his time,” Jimmy “Red” Parker told the Arkansas Democrat-Gazette’s Jim Bailey in 2001, the week after Benton’s passing. Parker played for Benton at UAM and later became its head coach. “He was so intelligent he would have been a great coach no matter what system he was using, but dang few coaches of that time, anywhere in the country, understood as much about offense as he did. He could teach any aspect of football, but the thing he taught best was how to get open and catch the ball.”

In an age when the forward pass was not as sophisticated and the game was not as fast-paced as it is today, Benton’s work was eye-catching.

On Thanksgiving Day 1945, Benton caught 10 passes for 303 yards to help the Cleveland Rams defeat the Detroit Lions to win the division title.

The single-game record stood for 40 years, until it was broken by Stephone Paige of the Kansas City Chiefs, who had eight receptions for 309 yards in a game against the San Diego Chargers on Dec. 22, 1985.

He also caught 9 passes for 125 yards and 1 touchdown in the Rams’ 15-14 win over the Redskins in the NFL championship game that season.

In 1946, Benton led the league with 63 catches for 981 yards in the inaugural season of the Los Angeles Rams.

Benton was a consensus All-NFL choice in 1945 and 1946, and he was a second-team All-Pro selection in 1939 and 1944. He ranked among the top five receivers in the NFL in six of his nine professional seasons.

At the time of his retirement after the 1947 season, Benton ranked second on the NFL career list, behind Hutson, with 288 catches for 4,801 yards and 45 touchdowns.

Benton was named to the NFL’s All-Decade team of the 1940s. He played on two NFL championship teams: the 1943 Chicago Bears and the 1945 Rams.

Before that, Benton tore up the record books as the first great receiver at Arkansas. His 48 catches for 814 yards and 7 touchdowns in 1937 made him the Houston Post’s choice for Southwest Conference Player of the Year. Those 48 catches stood as the SWC record until 1963 and the UA record until 1971.

Benton caught the lone touchdown pass in a 6-0 win over Texas in 1936 that gave the Razorbacks their first official SWC title. He was also a letterman on the Arkansas basketball teams in 1937 and 1938.

Benton came back to the state and continued his legacy in coaching.

“He had a great influence on a lot of our lives,” former Arkansas State Coach Larry Lacewell, who played at Fordyce, told the Democrat-Gazette in 2001. “I’ve been all around, and he’s one of the greatest heroes that this state’s ever had.”

Benton went on to work in the oil business in Pine Bluff before retiring in 1982.

Benton’s wife, Lena Mills Benton, told Bailey in 2001 that Benton had been rejected for military service due to a heart murmur and high blood pressure.

“So he went back to doing stressful things like playing and coaching football,” she said. “Above everything else he did though, he always served as a wonderful role model for his family.”