Shawn Andrews cleared way for backfields in college and beyond 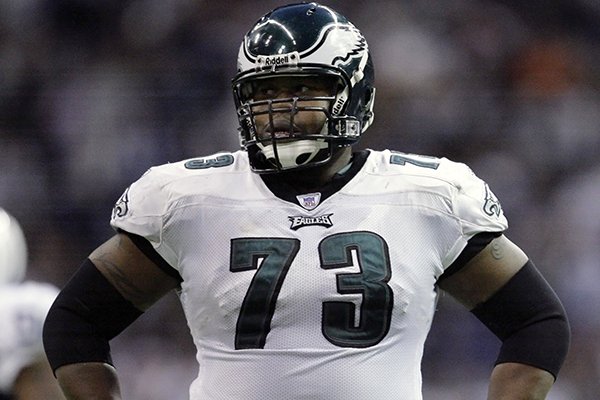 FAYETTEVILLE — The University of Arkansas first competed in gymnastics in 2003, but there was a Razorback doing back flips in 2001 as a freshman.

“Shawn was so quick and light on his feet, had so much agility and athleticism that he’d do back flips at practice even though he was 6-5 and 330 pounds,” said Houston Nutt, the Razorbacks’ head football coach from 1998-2007. “He could do handstands, too.

“Sometimes he’d walk on his hands from the practice field back to the Broyles Center. I’d tell him, ‘Shawn, please don’t do those back flips and handstands.’ I was afraid he was going to hurt himself. But then three or four days later, he’d be doing them again.”

Andrews’ incredible athleticism for his size helped the Camden native become a two-time consensus All-America tackle at Arkansas in 2002 and 2003. He entered the NFL Draft after his junior season and was a first-round pick by the Philadelphia Eagles in 2004 at No. 16 overall.

A Pro Bowl selection at guard for the Eagles in 2006 and 2007, Andrews is ranked No. 7 on the Arkansas Democrat-Gazette’s countdown of top pro Razorbacks.

Andrews said in an interview with the Democrat-Gazette in 2018 when he was inducted into the Arkansas Sports Hall of Fame that the gymnastics moves were about having fun.

After Andrews’ first Pro Bowl honor in 2006, he told reporters in Philadelphia that he was motivated to have his photo on display in the Eagles’ training facility in a hallway that features Pro Bowl players.

“Every time I walked past the pictures here for the Pro Bowl, I would touch the spot where I wanted to be,” Andrews said. “I finally got that spot.”

Andrews made his first start for the Razorbacks as a true freshman at Alabama in the third game of the 2001 season.

The Crimson Tide beat the Razorbacks 31-10, but Andrews had an impressive college debut.

“Shawn got underneath an Alabama linebacker and just de-cleated him,” said Mike Markuson, Arkansas’ offensive line coach at the time who is now a high school coach and teacher in Clarksville, Tenn. “Shawn sent him flying through the air and the guy landed on his back.”

Andrews started the rest of his Arkansas career, and he won a starting job as a rookie with the Eagles, but suffered a broken leg in the 2004 opener against the New York Giants that ended his season.

Andrews said in 2006 that his weight had gotten close to 400 pounds, and he credited getting back down to 340 for his Pro Bowl season.

“I know I’ve made some big strides from last year,” Andrews told reporters in Philadelphia. “I lost the weight. I was able to prevail on a lot of plays where, as opposed to last year, I’d be out of breath. I think I was more of a mauler this year.”

Andrews started the first two games in 2008, then was sidelined the rest of the season because of a back injury. He underwent surgery, but re-injured his back in training camp in 2009 and missed the entire season.

The Eagles released Andrews after the 2009 season and he signed with the Giants. He played tackle in 2010, but continued to experience back pain and retired from football after the season. He now lives in Little Rock with his wife and two sons.

Dealing with so many injuries hasn’t been easy, Andrews told the Democrat-Gazette in 2018.

“You know what though, I would say my good days outweigh my bad,” he said.

Arkansas opened the 2001 season by rallying to beat UNLV 14-10 in Little Rock, then lost to Tennessee 13-3 in Fayetteville.

When the coaching staff met on Sunday after the Tennessee game, Nutt suggested to Markuson that it might be a good idea to start Andrews.

“I guess we hadn’t started Shawn the first two games because as a true freshman we weren’t sure he was ready,” Markuson said. “But we had really been struggling to run the ball, and I agreed with Houston it was time to give Shawn a start. The rest is history. Shawn was just an incredible player for us. That guy was crazy good and crazy gifted.”

Tom Murphy of the Arkansas Democrat-Gazette contributed to this article