Former Hogs give back with food 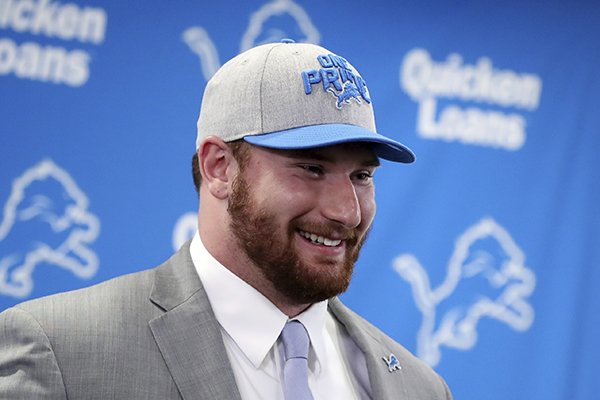 FAYETTEVILLE — Frank Ragnow’s donation to a pair of food banks provided an estimated 100,000 meals in Northwest Arkansas, according to a calculation provided by one of the organizations.

Kent Eikenberry, president and CEO of the Northwest Arkansas Food Bank, said Ragnow’s $5,000 contribution to the organization was worth up to 50,000 meals. Ragnow, a former All-SEC lineman at the University of Arkansas, also made a $5,000 donation to the Gearhart Full Circle Food Pantry at the UA last month.

“We use the calculation that it helps to provide up to 10 meals for every dollar,” Eikenberry said. “As an individual donor, it was a large gift, and then when you add it to he gave the same gift to the Full Circle Food Pantry on campus…it’s a very generous gift.”

In addition to the food banks in Arkansas, Ragnow donated $3,000 to the Eastern Carver County Schools’ Angel Fund and the PRISM Marketplace Food Shelf in Minneapolis and St. Paul, Minn., and he gave $10,000 to Gleaners Community Food Bank in Detroit.

Eikenberry said his organization’s food calculation is based on the number of pounds of food it distributes and its expenses. He said each food pantry calculates how many meals it can provide per dollar differently.

“We operate pretty lean and I would think the Full Circle would be that way,” Eikenberry said.

Ragnow said he was motivated to donate to food pantries following a conversation with his mother, Marty, last month. Marty Ragnow is a school worker and mentioned how reliant some students are on the meals they receive at school.

Ragnow said each community he donated toward had a significant meaning.

“Minnesota is my home and always will be my home. It’s my favorite state in the world,” Ragnow said. “Arkansas took me under its wing and molded me as a person, got me through a lot of tough times. The fans and the people there have been nothing but first class, just a family. And ever since I got to Michigan, the Detroit area has done nothing but embraced me and support me.”

Remembering when Ragnow reached out about donating, Eikenberry said, "My first thought was, ‘Man, I’m a Lions fan now.’”

Eikenberry said the Northwest Arkansas Food Bank, which partners with other agencies, has seen an increase in need for distributions since schools and businesses began shutting down temporarily last month. He said at least 14 mobile pantries have been deployed across the region.

“We’re not seeing a lot of sick people in Northwest Arkansas,” Eikenberry said, “but we’re seeing thousands and thousands of folks who got a paycheck three weeks ago and aren’t getting one now.

"Anytime the kids are out of school, you see an increase in the amount of consumption through there because nine months out of the year the kids get at least lunch, and maybe breakfast and lunch in the classrooms, and if school's out they're not getting fed.

“The big thing we’re trying to tell people is: three weeks ago you probably never thought about going to a food pantry, but if you’ve got to go, that’s what they’re there for. Don’t feel bad about it. There are no questions asked. Just go in and tell them you need help and they’re going to give you food.”

Ragnow is one of at least two NFL players who have donated food in Northwest Arkansas in recent weeks. Brandon Allen, the former Arkansas quarterback who is now with the Denver Broncos, partnered with C.J.’s Butcher Boy Burgers to donate more than 100 meals to health care workers at Mercy in Rogers last week.

“I was contacted by a friend who knows Brandon very well and he said, ‘Look, they’ve raised some money and are wanting to give to some of the front-line responders. Are you willing to contribute?’” said Keith Wilson, owner of C.J.’s.

Wilson, who said his business provided 397 free meals to children in Fayetteville and Russellville over Spring Break, said he jumped at the opportunity to help Allen’s cause.

“We’re trying to do our part helping the community," Wilson said. "It’s about community.”

Brewer said they will donate $16,500 to organizations attempting to help food industry workers, or direct support for wait staff and bartenders. They will donate another $3,000 toward a Fayetteville Public Schools fund to feed children.

Eikenberry said that for individuals, financial contributions to food pantries can “go a lot farther” than food donations because food banks can purchase items at a lower cost than can be found in grocery stores.

“We’re even encouraging people not to do food drives,” Eikenberry said, “but to donate cash and help out people as best they can.”