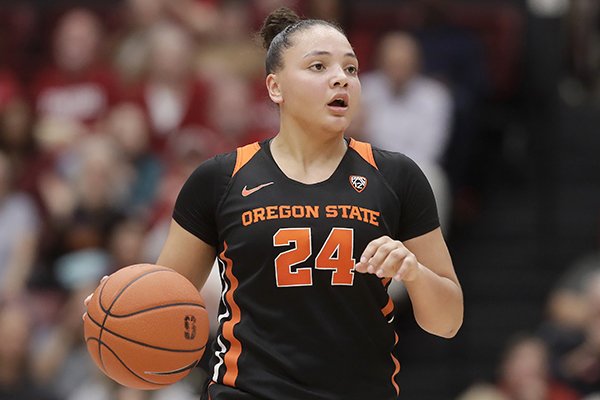 She announced plans to play for the Razorbacks on Saturday, marking the second time she has committed to Arkansas coach Mike Neighbors. Slocum committed to Washington as a junior while Neighbors was the team's head coach.

As a graduate transfer she has immediate eligibility.

“She’s one of us,” Arkansas Coach Mike Neighbors said. “Hopefully, we have earned your trust the last three seasons. So, trust us when we say that she is the perfect fit in our locker room, for our city, for our state and for the SEC.

"Our recruiting relationship has had more twists and turns than the Pig Trail between Ozark, Brashears and Huntsville, but we’ve never lost that connection. The circumstances never aligned for us to coach her. Not until now.”

The Razorbacks finished the season with a 24-8 record, including 10-6 in SEC play. It was the program's first winning record in conference play since the 2011-12 season.

Adding Slocum to the roster is another plus for the program.

“We have seen her play the maximum number of games the NCAA permits and can say to our fans with certainty that y’all have every reason to be excited,” Neighbors said. “Over the next eight months, we can tell the stories about every twist and turn, but for now, let’s just welcome our newest Razorback to the Arkansas family.”

Slocum also made All- Pac-12 as a redshirt sophomore while averaging 15.4 points, 4.5 assists and 3.4 rebounds per game. She has 507 career assists, which is No. 2 nationally among non-seniors.

Slocum was a McDonald's All-American and state Gatorade Player of the Year as a junior and senior at Mountain View High School in Idaho. As a high school senior she averaged 24.6 points, 6.8 rebounds and 6.1 assists.

ESPN rated her a 5-star recruit, the No. 3 point guard and No. 7 overall prospect in the nation in 2016. Slocum de-committed from Washington and signed with Maryland, and was the WBCA National Freshman of the Year in 2017.

She visited Arkansas after leaving the Maryland program, but ultimately signed with Oregon State in 2017.