Wayne Martin was model of consistency in New Orleans 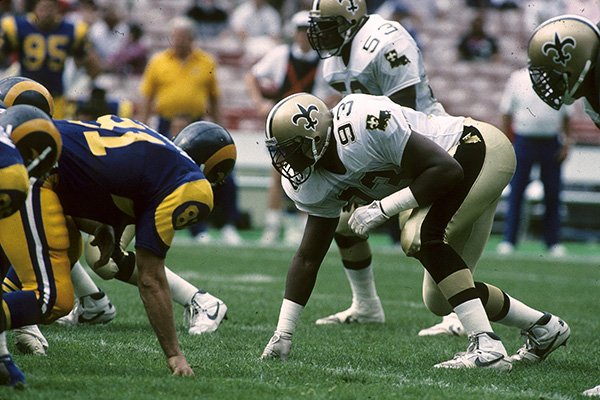 FAYETTEVILLE — Gerald Wayne Martin had the kind of professional football career that many players can only dream about.

Martin, a Cherry Valley native and All-Southwest Conference standout defensive lineman at the University of Arkansas, played his entire pro career with the New Orleans Saints, and he stayed mostly injury free.

He put together a monster run for the Saints in the early to mid 1990s that helped him land in the No. 6 spot on the Arkansas Democrat-Gazette’s list of top Razorbacks in the pros.

Martin remains the Arkansas record holder in career sacks (25.5) and single-game sacks (5), and he kept up his production during his years in the NFL.

Martin, who went by his middle name Wayne, became a mainstay at defensive end for a New Orleans franchise that enjoyed its first sustained run of moderate success under Coach Jim Mora during Martin’s 11-year career.

He was a first-round NFL Draft selection, going to New Orleans with the 19th pick of the 1989 draft.

With ace linebackers like Rickey Jackson, Sam Mills, Vaughan Johnson and NFL Defensive Player of the Year Pat Swilling joining standouts like Martin, Robert “Pig” Goff and Frank Warren up front, the Saints won their first division title in 1991 in their 25th season in the NFL and Martin’s third in the league.

“I didn’t go to the Senior Bowl,” Martin said in describing his draft story on a Saints Legends video released by the team in 2018. “They had a combine, but it wasn’t as extensive as it is now. I mean, it didn’t go so much on how physical [you were], how fast you ran. They did all that, but it was what could you do on the field.”

Martin rattled off the names of the Saints greats he had joined in the video and how they helped shape his career.

“Those guys were in their prime,” Martin said. “When I got here, they were like 8, 9 years in [the league]. They were in their prime. … I’ve never seen anything like it. I mean, we swarmed teams. We could shut down anybody. … They meant so much to my career. I just learned so much from them.”

Martin’s durability and consistency were hallmarks for those Saints teams, who racked up four second-place finishes in the NFC West, often behind the powerhouse San Francisco 49ers, during his career.

Martin missed just one game, played in 171 games and started the last 144 consecutive games of his career in the NFL.

“The 144 consecutive starts I made is a club record for the Saints,” Martin said in his induction speech to the UA Hall of Honor in 2004. “That’s what I’m most proud of, that when it was time to play, I always was ready to line up.”

Martin was recognized with a Pro Bowl selection in 1994 and collected a career-high 88 tackles in 1996. He led the Saints in sacks four times.

Martin was inducted into the New Orleans Saints Hall of Fame in 2003 in his first year of eligibility four years after his retirement.

“I almost dropped the phone when I got the call,” Martin told Jim Bailey of the Arkansas Democrat-Gazette.

He finished his NFL career with 82.5 sacks, second on the Saint’s career list behind only Jackson (115).

According to the Pro Football Reference web site, Martin is rated as the 10th best Saints player of all time in “approximate value.” The only defenders ahead of him are No. 2 Jackson, No. 5 Cameron Jordan, No. 7 Swilling and No. 9 Mills.

The Saints nearly lost Martin in 1993 when the Washington Redskins approached him with a four-year offer for $10.1 million. The Saints elected to match the offer at the 11th hour, sending a contract to Martin’s agent, former Arkansas quarterback Kevin Scanlon of Stephens Sports Management just before the deadline.

“After working with him the last four years, he’s right where we want him right now as a player,” Mora said at the time. “A defensive lineman like Wayne is a premium in this business.”

His bio on the Saints Hall of Fame web site described Martin as “low key, even quiet, reserved as a person. On the field he was anything but.”

Also in the bio, “To date, Wayne Martin is the best defensive lineman in New Orleans Saints history.”

At Arkansas, Martin had an epic game as a senior against Ole Miss in the Hogs’ Southwest Conference championship season of 1988. He collected a school-record five sacks in the Razorbacks’ 21-13 win at War Memorial Stadium in Little Rock.

He led the Razorbacks in sacks three seasons, including 13 in his senior year 1988.

Martin also ranks tied for fourth at Arkansas with Jimmie Walker with 37 career tackles for loss.

Martin holds a place on the UA’s All-Century Team and its 1980s All-Decade team. He was inducted into both the Arkansas Sports Hall of Fame and the UA Sports Hall of Honor in 2004.