After he left Arkansas, Wayne Harris became one of Canada's all-time greats 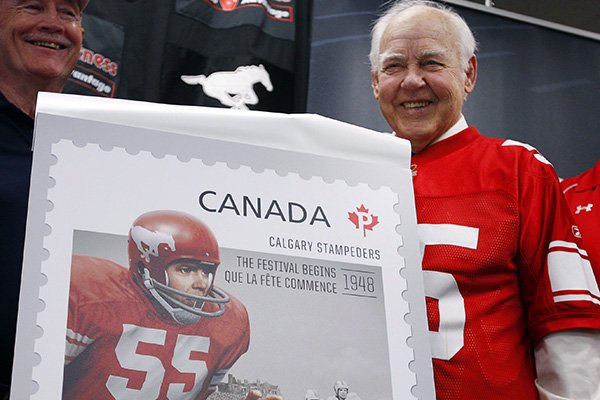 Photo by Courtesy of Calgary Stampeders

Former Calgary Stampeders linebacker Wayne Harris is shown in 2012 with a stamp that commemorated his playing days in the Canadian Football League.

FAYETTEVILLE — If Carroll Wayne Harris could have tolerated the big city, he might have become an NFL great.

Instead, the former Arkansas Razorback linebacker, who went by Wayne, played both ends of his football career in more comfortable oil towns — El Dorado and Calgary, Alberta — with a stop at the University of Arkansas in between.

Harris, nicknamed "Thumper" for his sledgehammer tackling style, is a Canadian Football League legend. A CFL Hall of Fame inductee, immortalized on a postage stamp in Canada in 2012 to celebrate the 100th year of the Grey Cup, an inaugural inductee into the Calgary Stampeders’ Wall of Fame, Harris earned it all with his gritty style of play.

The native of Hampton in south Arkansas, Harris is the No. 5 player on the Arkansas Democrat-Gazette’s list of the top pro Hogs of all time.

Harris finished his Arkansas career with a load of honors. A two-time All-American in 1959 and 1960 while helping the Razorbacks win back-to-back Southwest Conference titles, Harris racked up a school-record 174 tackles as a senior and earned SWC player of the year honors.

The 6-footer played two ways for the Razorbacks, at center on offense and a hard-charging, sideline-to-sideline linebacker on defense. He weighed around 180 pounds early in his Arkansas career before filling out into a 195-pound pro.

Harris was drafted by the Boston Patriots in the 1961 NFL Draft but decided to sign with Calgary.

“Basically the decision was made because I didn’t want to go East,” Harris told the Associated Press prior to his passing on June 4, 2015. “There are too many people down there.

“I wanted to stay in the West and I talked to a couple of guys at college who were playing up here and they really loved the CFL and told me it was really a first-class league. I’m sort of a loner and don’t like a lot of people being around.”

Harris played for the Stampeders his entire professional career (1961-72) then became an oil executive for CanTex Drilling and CE Franklin.

Those who watched him play or heard stories of his striking prowess, speak of Harris in almost reverential tones.

“Wayne Harris was one of the all-time great Razorbacks,” former Arkansas coach and athletic director Frank Broyles said in a UA release at the time of Harris’ death. “He was a fierce competitor on the field and his toughness was legendary. He was everything an Arkansas football player should be.”

Harris picked up his “Thumper” nickname as an El Dorado Wildcat and lived up to it as a Razorback.

“In tackling drills, we’d count off the guys in the line,” Horton said. “Nobody wanted to be paired against Wayne.”

Said Broyles to the Arkansas Democrat-Gazette in 2004, “I don’t think anybody that’s ever played linebacker had more ability than Wayne to make plays all over the field. He weighed 190, but when he tackled you, you thought a 260-pounder had hit you.”

Harris’ legend grew in 1959 when his hit on SMU’s Don Meredith knocked the quarterback out.

“It’s hard to see your receivers when your eyeballs are in the back of your head,” then Arkansas linebackers coach Wison Matthews said at the time.

Harris earned virtually every honor the UA can bestow on a football player. He was named to the All-Century team in 1994, the school’s all-decade team of the 1960s and is in the UA Hall of Honor (1989).

Harris played on three Grey Cup finalists with Calgary and took down MVP honors when the Stampeders won the title in 1971 with a 14-11 victory over Toronto.

He was a CFL West all-star 11 consecutive seasons, a league all-star eight times and was voted lineman of the year in the league a record four times. The Stampeders retired his No. 55 jersey in 1973, the year after his retirement.

In 2006 polling by The Sporting News, Harris finished No. 9 in voting for the top 50 Canadian Football League players of all time. He was the highest-ranked player on the list who only played defense.

Tributes poured out upon his death in 2015.

“Wayne Harris was a great player who meant so much to this franchise and to this city,” said Stampeders president Gordon Norrie. “He was also a great man who will be missed and on behalf of the Stampeders organization, I extend sympathies to Wayne’s wife Anne and his children Wayne Jr., Cooper, Heather-Ann and Wynelle.”

Wayne Harris Jr., the head coach for the University of Calgary football team since 2015, led the Dinos to the Vanier Cup Championship last fall.

The Globe and Mail of Canada wrote a glowing feature on Harris after his passing.

Included in the piece is this passage: “Those who knew him better spoke of the man behind the accolades, whose professionalism was unwavering. He never trash-talked or raised his voice in a game, never lost control and never took a cheap shot at an opposing player. He also revolutionized the middle linebacker position.

“Before Mr. Harris, the men in the middle were an extension of the defensive line. They relied on size and blunt force to do the job; Mr. Harris was all about the quick strike and being able to run from one sideline to the other to tackle the ball carrier – for a loss.”

The newspaper quoted Stampeder defender Craig Koinzan, a teammate, who said Harris was as much of a gentleman as could be found on a football field.

“He wasn’t very emotional,” Koinzan said. “He was in control in the huddle; in control on the field. … You could always count on him to be there. I was his backup at middle linebacker, but I never played a down because he never missed a play.”

Said Harris Jr. in the article, “I’ve seen game film of my dad in action. What was impressive to me was how he was always around the football. He had a nose for it.”

And when Harris arrived, he usually came with a thump.