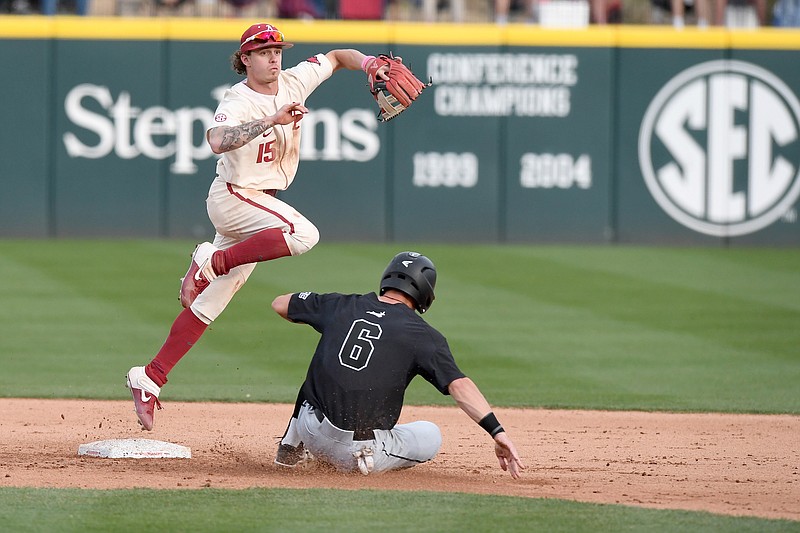 FAYETTEVILLE — Casey Martin is back in town.

Upset at how the season ended, Martin went back to his hometown of Lonoke last month on the same day the NCAA canceled the College World Series, ending any chance that he and his classmates could become the first Razorbacks to make it to college baseball’s pinnacle event three times.

Of going home, Martin said, “It was nice to just kind of take a breath and step back from everything and relax for a minute, get myself back together and figure out what I’m going to do.”

From a baseball perspective, Martin’s next step centers around this year’s MLB Draft, whenever that may be. MLB owners and players agreed last month that the draft, traditionally held in early June, could be pushed back as far as a July 20 start date, and could be shortened from 40 rounds to as few as five rounds as teams look to compensate for a year that could potentially not include any games because of covid-19.

“The whole draft process is just crazy right now,” Martin said. “They’re planning on having one (a draft), but then again, who knows? Something crazy might happen.”

When there is a draft, Martin, a junior shortstop, is projected to be selected early. Baseball America rates him the No. 24 prospect this year - a first-round projection that would include a signing bonus valued at more than $2.8 million.

Arkansas coach Dave Van Horn has said he expects Martin to sign professionally this year and not play again for the Razorbacks in 2021. But the option is there, and possibly more appealing for some since the NCAA last month agreed to restore the year of eligibility that baseball players would have lost as a result of the coronavirus-shortened season. That extra year of eligibility is especially important for juniors, who would have otherwise lost important negotiating leverage in future drafts.

“I’m just waiting to see how everything plays out,” Martin said, “then whenever everything does play out the way it’s supposed to, that’s whenever I’ll sit down and decide, OK, what’s it going to take for me to go or come back.”

Martin said professional scouts have mostly spoken to him about playing middle infield. He played the past two seasons at shortstop, where he made some highlight-reel defensive plays, but also committed 28 errors in 81 games.

"Scouts say they see me as a middle guy, so short, second, possibly third, possibly center field kind of guy," Martin said. “They always ask, ‘What would you say if we put you in the outfield?' Honestly, at that point you’ll do anything to get in the lineup; it doesn’t matter where you play, you've just got to hit. I used to play outfield, so it’s not a big deal to me.”

Martin said most of his focus now is on staying in shape, doing homework and cleaning his apartment. Since coming back to Fayetteville he has worked out with some teammates, including position players Christian Franklin, Matt Goodheart and Braydon Webb, and pitchers Kevin Kopps, Kole Ramage, Miller Pleimann and Liam Henry. Their workouts are at private, off-campus venues because the Razorbacks’ facilities are closed, a reminder of the season that was lost.

For Martin, it ended just as it appeared he was turning a corner. He modified his batting approach the week before what would become the Razorbacks’ final game against Grand Canyon on March 11, returning to a more open stance he used as a freshman when he hit a team-high .345 on a club that finished national runner-up.

In his final six games this year Martin was 10-for-26 to raise his batting average to .271 after it dropped to .182 entering the month of March.

“I think we were getting ready to see the best of him,” Van Horn said March 19, “and I really liked the way he handled all the pressure and his demeanor even when he wasn’t having a good day compared to maybe last year when it didn’t go good for him - just the growth mentally for him and the development to be able to handle the tough days. I think he was getting ready to take off. He had shown that a little bit the last week.”

Martin had just 1 RBI - a solo home run - during Arkansas’ first 10 games, but 9 RBI in the final six games, including a 4-RBI performance in the finale against GCU.

He began to improve his pitch recognition and cut down on his strikeouts, with eight over the final 26 at-bats, compared to 14 in his first 33.

“You look at the beginning of the season that I had and then those last four, five, six games, there was a big jump there,” Martin said. “There was 80 points in batting average, there was less swings and misses - everything in the zone that I swung at got hit. It was really starting to turn around and that is really one of the most frustrating things, the fact that I was starting to turn things around.”

The change came after Martin was benched following a 1-for-9, six-strikeout performance in games against Oklahoma and Texas at the Shriners College Classic in Houston in late February. Martin didn’t start the Razorbacks’ game against Baylor the following night, snapping a streak of 102 consecutive starts.

“Everybody knows I had some mechanical issues and it was causing me to pull off a lot of balls and not see spin out of the hand,” Martin said. “After Houston, after being benched, me and (Arkansas hitting coach Nate) Thompson worked on some stuff. We went back to a toe tap, back to freshman year and I started seeing the ball better, started seeing more spin, started staying on pitches longer and that’s when things started turning around for the better.

“It was good to see that I can make in-game changes quickly and turn it around quickly.”

Then came the abrupt ending. The Razorbacks’ 10-9 victory over GCU on March 11 was their fourth straight win, and following the game most questioning revolved around a trip the next day to Mississippi State for a top-25 showdown in the SEC opener for both teams.

Eighteen hours later the season was over.

“When it first happened, I was a little mad, honestly, a little upset,” Martin said. “It’s junior year, something everybody looks forward to with the upcoming draft and stuff, especially at a big school like this, and me being in the position I'm in.

“I felt like I was a little cheated out of it, but at the end of the day it is what it is. You have to take that and live with it."

Martin said it was disappointing to see the team disband as players headed home.

“It takes a special group of guys to go to the World Series once, but to be able to go twice the chemistry has to really be there,” Martin said. “This year was, out of all three years I’ve been here, probably the closest group. Everybody loved everybody and wanted to spend every minute of every day with each other. You don’t see that a lot with baseball teams anymore. It was like a true family - not just teammates, but a legit family.

“I think that’s what I’ll miss the most, is just being around those guys and the chemistry and the energy they brought to the field every day.”