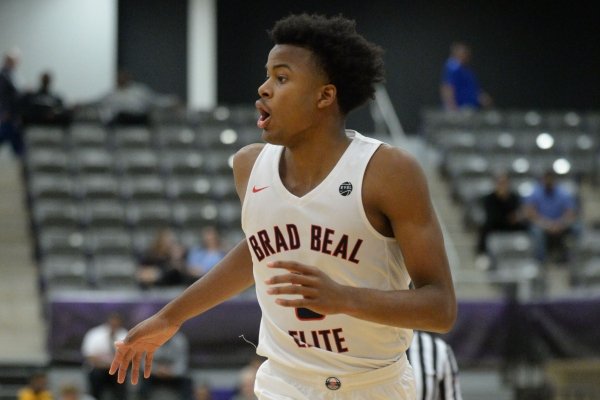 ESPN 4-star shooting guard Moses Moody's path to signing with the University of Arkansas was fueled by Coach Eric Musselman, his staff and the Razorback fans.

"Definitely coach and the whole coaching staff, getting up here and talking to him, seeing his vision and his plan," Moody said. "The fan base helped with how excited they are about their team, our team. I just wanted to be a part of something great."

Moody, 6-6, 200 pounds, played his past two seasons at Montverde Academy in Florida after playing his sophomore season at North Little Rock, where he was named to the Arkansas Democrat-Gazette's All-Arkansas Preps underclassman team.

Some debate whether fans on Twitter and other social-media platforms help or hurt schools during the recruitment of prospects. Moody said the Arkansas fans helped make the program more inviting.

ESPN rates Moody the No. 10 shooting guard and No. 38 overall prospect for the 2020 class. He, point guard Khalen Robinson, forward Jaylin Williams and guard Davonte Davis make up ESPN's No. 6 recruiting class nationally.

Arkansas' videos on social media before and after the coronavirus pandemic have been a hit with fans and recruits. The post-virus videos have included ones featuring Musselman running a practice minus the players and staff, and the latest one shows him in the stands of Walton Arena impersonating a fan by yelling some of the concerns fans expressed this past season.

Moody said Musselman's videos have been a good way to promote the program.

"I can see it being that, and just seeing a coach that's willing to put it all on the line to make this thing to be the best as possible," Moody said. "It definitely helps the fan base, helps the brand and with our logo being on SportsCenter like it was with him doing the fake practices and everything, it's expanding the brand nationwide because everybody sees it. He's doing what he has to do to evaluate the program."

What fans see of Musselman in videos is what he's like in person, Moody said.

"He's definitely a fun person," Moody said. "Interesting conversations. It's just him being himself. With the cameras being there that's cool, too, but he's going to be himself regardless, and that's something I definitely respect about him."

Moody has worked hard on his strength and weight over the last three years by going from 180 pounds as a sophomore to his current weight of 200. He's added good weight by having an improved diet, lifting weights and other training methods.

He thinks he's ready to handle the rigorous demands of the SEC.

"That's going to be a big advantage that I haven't had in the past. I've always been more of a smaller, skinnier kid, but coming up and adding more muscle that's definitely going to allow me to do more on the inside, rebound and finish through contact," Moody said.