A step at a time: Agim, others creative in routines 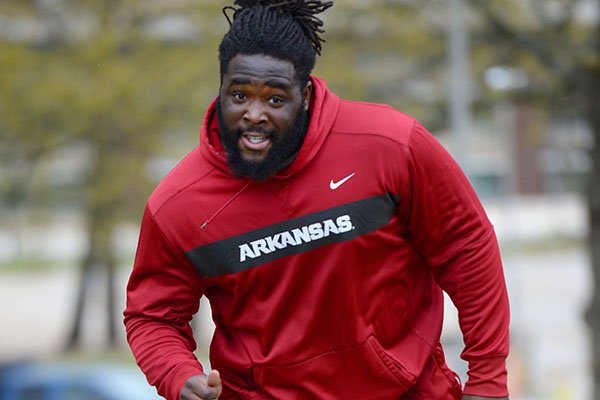 Former Arkansas defensive lineman McTelvin "Sosa" Agim sprints Friday, April 17, 2020, up the last of several flights of stairs on the University of Arkansas campus in Fayetteville. Agim is the highest-projected Razorback for the 2020 Draft.

FAYETTEVILLE -- Former University of Arkansas defensive lineman McTelvin Agim isn't letting the coronavirus crisis slow the pursuit of his dream of playing in the NFL.

Agim's draft status was seemingly on the rise through the winter all-star circuit and NFL Draft testing, and he didn't want to slow that momentum after the pandemic shut down NFL offices and pro days and travel to workouts. He and his Arkansas teammates have taken a unique approach to staying fit, even with gyms and other workout facilities, including those at the UA, shuttered since last month.

His agent, Nicole Lynn with the Young Money Sports Agency, posted a video on social media April 6 of Agim jogging the notorious steps from behind the Jerry and Gene Jones Center up to Stadium Drive, and then, in a steeper segment, to the higher reaches of campus.

That tough jog, which he usually does two or three times in one setting, is one of the elements of Sosa's workout rotation.

Arkansas linebacker De'Jon Harris has done sand pit work and some other drills with Agim, but not the hill.

"He can have that one," Harris said. "He hasn't even called my phone. I think he just knew that I was never gonna hit that hill with him. ... I'm staying on the safe side too, because I had that foot injury. Like, I'm not running up that hill. I'll just stay on my grass hills."

Safety Kamren Curl, a junior who declared early for the NFL Draft, said he's seen the Agim video on the long hill.

"Yeah, I feel like I could do it," Curl said. "It's just I've been around those hills for so long. We had to walk up them every day going to class. I've been trying to get away from them."

Agim and this year's class of top NFL Draft prospects will always be remembered for persevering through the crisis and hearing their names called from the basement of NFL commissioner Roger Goodell's house or some other remote locale or bunker.

It has definitely been a strange six weeks ... so far.

"Yeah, it's kind of weird that in a sense you can't work out where you want to work out," Agim said.

He and others have done drills in a sand pit at Curl's apartment complex and worked out with an array of Razorbacks past and present. Among them are fellow draft hopefuls in Harris and defensive tackle T.J. Smith as well as current Hogs Jonathan Marshall, Micahh Smith, Shamar Nash and others.

"Man, I've had to be extremely creative," said T.J. Smith, who is driving from Fayetteville to his home in Moultrie, Ga., today in preparation for watching the NFL Draft, which starts Thursday.

"For a little bit, it was a lot of body weight stuff. Push-ups, sit-ups, all types of things. My girlfriend helps me out a lot. I'd have her lay on the ground and I'd grab her hands and do rows or stuff with her. I put her on my back and do squats or stuff like that."

Smith said after his local fitness center closed he eventually hooked up with ex-Razorback Colton Jackson, who had weights at his house.

"I was able to go over there and get some quality work in," Smith said.

Curl said he's been training with former Razorback Dre Greenlaw, who has been in town some since his San Francisco 49ers lost to the Kansas City Chiefs in the Super Bowl on Feb. 2.

"Most of the time it's been me and Dre working out together with some other Arkansas players and stuff," Curl said. "And then we'll go to a field or you've got like at home pull-ups and push-ups and stuff."

Said Harris, "I've got some bands and dumbbells at my house, and a couple of guys that are still on the team have some dumbbells at their house. So we'll just get some workouts in with each other. We'll hit the parks with our cones and ladders."

A five-star signee from Texarkana, Texas, who finished his prep career at Hope, Agim played on one winning Arkansas team in 2016.

He had 40 starts as a Razorback, five as a freshman, 11 as a sophomore and all 12 games each of the last two years. He shifted full time to defensive tackle in 2019 and got his weight up to near 300 pounds. Agim posted 39 tackles last year, with 20 solo stops, and team highs of 5 sacks and 8.5 tackles for loss.

He finished the season with a 78.6 grade from Pro Football Focus, including an 81.5 rating in pressure.

Agim said he's currently 6-3, 306 pounds, and that he's gotten positive feedback from his practice work at the East-West Shrine Game and Senior Bowl, as well as his testing from the NFL Scouting Combine.

"I feel like I did a great job at all of those," Agim said. "I feel like I really raised my stock. But I don't know how far I was climbing from. I didn't know where my starting point was. I've got to try to basically look at it through the lens of a GM. Every GM doesn't think the same way."

Agim said he's not concerned with projections on where he might be drafted and doesn't even want to hear them, or hear that his stock is on the rise.

"I don't know where I started at," he said. "We don't know. I asked my agent not to tell me. I'd like not to know. Whenever it happens, it just happens."

Agim will be in Texarkana for the draft.

In the meantime, he runs the hill or trains in the sand as opposed to conducting in-person workouts or interviews with NFL personnel like would have happened in year's past.

"Just a lot of phone calls, some Zoom," Agim said. "There hasn't been any face to face."