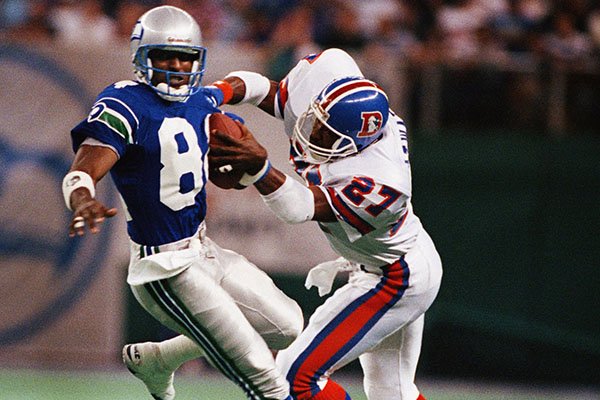 FAYETTEVILLE — Steve Atwater was holed up in his hotel room in Miami on the day before the Super Bowl about 12 weeks ago, waiting for an all-important signature knock on his door.

That knock, the signal of a candidate’s selection to the Pro Football Hall of Fame, came from the knuckles of David Baker, the hall’s president and CEO.

Atwater pumped both fists, hopped up from his chair and greeted Baker with a handshake and a big hug, saying his selection on Feb. 1 was worth the wait.

The best safety in University of Arkansas football history, nicknamed the Smilin’ Assassin, will cap his career with an induction into the hallowed hall on Aug. 5, nearly 32 years after his days on the Hill.

Atwater, a two-time Super Bowl champion and eight-time Pro Bowler, was chosen at No. 3 by the Arkansas Democrat-Gazette on a list of the best Razorback pro football players.

“It was extremely special, and I really had no idea I would be going in,” Atwater said. “I was definitely hoping it would happen. In prior years, it didn’t happen and I guess I was just kind of anticipating the same thing. But to get the knock on the door, it was really amazing.

“The special part about it is not just about me getting this award, it’s getting an opportunity to thank all the people who played a part in it.”

Atwater, in his third year as a finalist, was one of only three players from the NFL’s All-Decade teams of the 1970s, ’80s and ’90s (receiver Drew Pearson and safety LeRoy Butler are the others) who had not been selected for membership in the hall.

Atwater was a favorite of former Broncos owner Pat Bowlen, who died in June after being inducted into the Hall of Fame earlier in the year. Bowlen had Atwater’s framed No. 27 jersey hanging in his office along with the Broncos’ other Hall of Famers.

“I knew it was never a question of if he’d be enshrined, but rather when,” Bowlen’s daughter, Beth Bowlen Wallace, shared with the Denver Post in February. “While it would have been meaningful to see him in my father’s class, it’s outstanding he gets his own spotlight. My father is smiling in heaven at this well-deserved recognition for one of his favorite Denver Broncos.”

Atwater, the No. 20 pick of the first round in the 1989 NFL Draft, was inducted into the Broncos Ring of Honor. He played 10 seasons in Denver and finished his career with one season on the New York Jets’ roster.

Atwater said he has three moments that stand above all others from his pro career: his selection to the hall on Feb. 1; the Broncos first Super Bowl win, 31-24, over the Green Bay Packers in Super Bowl XXXII after the 1997 season; and a famous tackle.

“Definitely the shot against Christian Okoye,” Atwater said. “That one was well known. Everybody talks about that one.”

Okoye, known as the Nigerian Nightmare, had rushed for 1,480 yards and 12 touchdowns as a first-team All-Pro for the Kansas City Chiefs in 1989 before playing the Broncos the next year. Atwater said fellow safety Dennis Smith told him the Broncos shouldn’t tackle Okoye’s ankles or go high. They had to bring the wood to the 6-1, 253-pounder, straight on.

Atwater did just that on one of the NFL’s most memorable hits, filling a gap and dropping Okoye in his tracks with a crushing right shoulder after a short gain. The much-celebrated tackle, which came with millions of viewers watching live on Monday Night Football, can be viewed on YouTube with a microphone capturing the heavy collision and Atwater’s shout after the jarring tackle.

If Twitter had been a thing in 1990, reactions to Atwater’s hit would have trended.

“I just know when I turned on a game, I’d want to jump out of my seat when I’d see a guy like Ronnie Lott running to the screen and hitting somebody,” Atwater said. “I’m like, ‘Ooh man, what was that!’ I kind of wanted that same reaction. I wanted to give the fans that excitement, too.”

Atwater did just that as a player who at 6-3, 218 pounds, brought a combination of size and speed to the game that helped revolutionize the position.

“Steve was a dominant safety who changed the game as one of the most feared players of his generation,” Broncos president/CEO Joe Ellis said in a statement after Atwater’s selection to the hall.

Life is grand these days for Atwater, who is the manager of fan development for the Broncos.

“I interact some with the players and coaches and do some community service stuff with some of the nonprofits the Broncos have relationships with,” Atwater said. “There are quite a few things that are really fun, and it warms the heart. I couldn’t have drawn up a more fun job title than this.”

A quarterback at St. Louis Lutheran North High, Atwater’s college choices boiled down to Arkansas, Missouri and Tulsa. He’s not sure how many stars were attached to his prospect profile.

“I don’t know if we even had all that,” Atwater said. “If they had camps, I didn’t attend any of them. I couldn’t afford to do any of that.”

Atwater’s mother had been from southeastern Arkansas and his high school teammate, Bobby Joe Edmonds, was already a Razorback. Atwater visited the Arkansas campus when Lou Holtz was still the head coach.

“After the season, he left and went to Minnesota,” Atwater said. “I was like, ‘Man, is my offer still valid? What is the change going to be like?’

“Once they hired Ken Hatfield, he reassured me that the offer was still there. Bobby Joe, he was telling me it would probably be even better at that time. I decided to go ahead and commit, and it was really a good decision for me.”

The Arkansas coaching staff also made a really good decision by listening to Atwater when they asked him about moving to linebacker.

“I was like, ‘Ah, coach, I don’t want to do that,’ ” Atwater said. “I’m glad they didn’t force the issue. So I got a chance to stay at safety. I got a chance to get a running start. I felt like I had a bit of an advantage, being a little bit bigger and being able to run OK, and that helped me out.

“Then kind of having the size of some linebackers, yeah, that definitely helped. I felt like I had a little bit of an advantage playing the safety position.”

Atwater earned a spot on the UA’s All-Century team in 1994, and made the Razorbacks’ All-Decade team of the 1980s. He was inducted into the UA Hall of Honor in 1998 and the Arkansas Sports Hall of Fame in 2002.

He was a two-time All-American, a three-time All-Southwest Conference player, and his 14 interceptions still stand as Arkansas’ career record.

He is credited with 1,180 professional tackles, the most among former Razorbacks in the NFL, as well as 24 interceptions for 408 return yards and 1 touchdown, 5 sacks and 180 starts in 181 career games. He started all 155 of his regular-season games with the Broncos, plus all 14 playoff games.

Atwater said imposing physicality against opposing receivers and tight ends was always on his agenda.

“I got used to the blockers trying to block me and me trying to intimidate them to make sure they didn’t want to block me by the end of the first quarter,” he said.

“That was my focus. I wasn’t looking down the line saying, ‘I’m doing this to get into the Hall of Fame.’ Or I want to do this or want to do that. I just wanted to go out and work hard and I guess at the end of the day, when you look up after having your head down, you look up and can be happy about how far you’ve come.

“I didn’t know that back then, but kind of looking back on it, I think that’s what it was. Just put my nose down to the grind and work hard trying to do the right things in different situations. Treating people the right way. I think it all kind of paid off. I still try to live by that same mindset. Do right by people and believe it’ll come back, and do the best I can.”

The best Atwater could do made him one of the best pro Razorbacks of all time and a Hall of Famer.