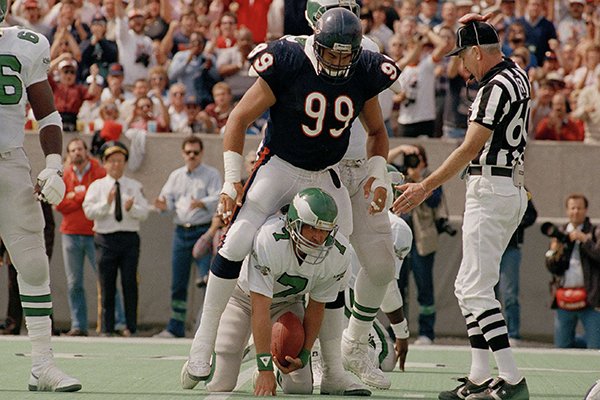 Philadelphia Eagles quarterback Ron Jaworski (7) has a Bear on his back after being sacked by Chicago Bears Dan Hampton (99) in the second quarter of the game in Chicago, Sept. 15, 1986. The Bears won 13-10 in overtime. (AP Photo/Charlie Bennett)

FAYETTEVILLE — Daniel Oliver Hampton started his football journey from way back in the pack. He ended it in the Pro Football Hall of Fame as a key member of the Chicago Bears on what is widely considered the best NFL team of all time.

He’s a living legend in Chicago, and a modern-day rock star to boot.

Hampton, a four-time Pro Bowl selection and the centerpiece of the Bears’ famed “46” defense in the early 1980s, holds the No. 2 spot in the Arkansas Democrat-Gazette’s list of the top pro Hogs of all time.

Hampton himself hardly could have imagined that the kid who was confined to a wheelchair for four months and didn’t step onto a football field until the 11th grade could have soared to his heights.

“One thing I take great pride in is we won the championship here in Chicago, and we’re now known as the greatest team,” Hampton said of the 1985 Bears, who went 15-1 and outscored opponents 91-10 in the playoffs, including a 46-10 rout of the New England Patriots in Super Bowl XX. “You ask me did I ever envision it? No. But that was the goal. We all made our minds up. We said, ‘We’re not here for a long time. We’re here for a good time. We’re going to make people remember us.’

“And you know what, it’s 30-something years later and like I said, a week ago they were doing a poll of the greatest teams of all time and we win that. So it’s nice to be remembered.”

Hampton’s aim was to play on winning teams, and the force of his oversized personality on a 6-5, 265-pound frame was an essential part of making that happen.

The Arkansas Razorbacks played in the Cotton Bowl, the Orange Bowl and the Fiesta Bowl during his four years on campus. The Bears — who had one playoff appearance in the 15 years prior to taking Hampton with the fourth pick of the 1979 NFL Draft — made the playoffs seven times during Hampton’s 12-year career, and they won the NFC Central six times in seven years during his heyday in the Bears’ No. 99 jersey.

“When I was a freshman, if you had told any of us, ‘Guys, you’re going to play in the Orange, the Cotton and the Fiesta’ and then some of my classmates — [Mike] Burlingame and those guys — they played in the Sugar. Wouldn’t the Razorback program play in those bowls in five years?" Hampton said.

“Think about that. That was a nucleus of kids that … they called us like the 'Junkyard Dogs' up there, all that crap, but that’s what we were. [Defensive coordinator Monte] Kiffin and Lou Holtz were a huge part of that.”

Many Arkansas fans would put the 1977 team, which went 11-1 and crushed No. 2 Oklahoma 31-6 in the Orange Bowl, in a class with the 1964 national championship team as the best in Razorback history.

“They did a deal where the favorite Razorback team of all time was the Orange Bowl team,” Hampton said. “And then two years ago was the 100-year anniversary of the Chicago Bears. Not only did I get to come to the Chicago Bears but … they voted our team as the greatest in the history of the NFL.

“I mean, when I was just a … skinny kid out there in Cabot, to say this was possible is one thing. But to say it was probable? It’s possible I could win the lottery, not probable.”

Among his many accomplishments, such as being a member of the NFL’s All-Decade team of the 1980s and the UA’s All-Century team selected in 1994, Hampton holds an obscure place in sports history.

He is believed to be the first player to ever perform the Gatorade bath, even though the New York Giants of 1986 are widely credited with inventing the now commonplace postgame ritual. Hampton poured a cooler of Gatorade on the head of Coach Mike Ditka after the Bears clinched the NFC Central in 1984.

“We won it up in Minnesota and late in the game we were killing them, like 35-3 or something like that,” Hampton recalled. “I’m on the sidelines with like five minutes to go — the backups were in — and I’m cutting the tape off my hands.”

Hampton said he looked at fellow defensive tackle Jim Osborne, a veteran in his 13th NFL season, and Osborne had tears in his eyes.

“It came over me. I’m thinking, ‘We’ve got to do something really stupid to commemorate this.’”

Hampton enlisted his longtime line mate Steve McMichael to hold Ditka up at the final gun so Hampton wouldn’t have to chase Ditka onto the field.

“I said, ‘We’ll dump it on his ass and this will be kind of a way to commemorate the deal,'” he said. “There’s a picture in the Chicago Tribune the next morning of me dumping it on him. So there is proof. This is two years before the Giants ever thought about the Super Bowl.”

Hampton was in the band as a multi-instrument performer at Jacksonville High School when Coach Bill Reed persuaded him to play football as a junior. He was still a raw talent when he signed with the Razorbacks in 1975.

Hampton notched 98 tackles to earn All-America honors in 1978, the same year he was selected Southwest Conference Player of the Year by the Houston Post. The Bears made him the fourth pick in 1979 and saw the fortunes of their franchise start turning around.

“It’s funny. My first couple of years in college, it was like it wasn’t clicking,” Hampton said. “Then all of a sudden, it really clicked, and boom!

“Same thing in the pros. My first training camp and the first month of the season, I didn’t know the nuances of pass rush, because there’s so much holding. A friend of mine said, ‘You need to watch Lee Roy Selmon,’ who was a great defensive end. So I’m watching him on film and all of a sudden it clicked. All he’s doing is he’s getting people off balance, and then countering. That became the basis of my pass rushing.”

Hampton was selected to the All-Rookie team in 1979 by the Pro Football Writers Association, and he made the Pro Bowl the next year after posting 11.5 sacks.

Part of Hampton’s value was his versatility. Bears defensive coordinator Buddy Ryan moved Hampton from defensive tackle to end and back three times in his career, which might have cost him some All-Pro selections.

“Over the years it was, ‘Where do we vote for him for the Pro Bowl or whatever?’” Hampton said. “Well, it depended on where I played. Then I played on the center in the 46, depending on the game, sometimes 60 or 80% of the time. But all that stuff is irrelevant now.

“At the time, I kind of shook my head. But hey, it was for the good of the team. And you know what? It’s that kind of sacrifice and ‘I’ll do whatever I have to to help the team’ attitude, those are good things.”

The Bears won 75% of their games with Hampton on the field. They won 33% of the 23 games he missed due to knee injuries.

Hampton had a chance to leave the Bears for a lot more money when he was heading for his second contract after the 1982 season on the heels of being voted the defensive player of the year by Pro Football Weekly. But he decided to stay in place, sensing the talent the Bears were accumulating.

“It was impossible to be around Ditka and not think of greatness because he was such an inspirational figure, and Buddy Ryan,” Hampton said. “You could tell we were putting together a defense that again is considered the greatest to put on shoulder pads. So I knew it was coming.

“But here’s the interesting thing. It was about that time that Donald Trump was trying to get me to play for the New Jersey Generals. And it was twice the money. But my agent said, ‘It could be gone in a year. You just don’t know.’

“I was thinking the same thing I told Bill Reed, my great high school coach, God rest his soul. He told me he was getting calls from all kind of colleges my senior year, and he asked me what I wanted him to do, have them call me?

“I said, ‘No sir. If Arkansas wants me, I don’t care who else does. I want to play for Arkansas.’ That’s the way I felt about the Bears. If the Bears want me, I’m not interested in any other offer.”

Hampton said he had a great vibe going with teammates like Mike Singletary and Richard Dent, and they could feel a championship team brewing.

He’s a fixture in Chicago media circles as part of the Pro Football Weekly show on Comcast-NBC Sports for the past 25 years. He also does the WGN radio Bears’ postgame show with Ed O’Bradovich called The Hamp & O’B Show.

In recent years, Hampton’s band, called the Chicago 6, had a revival. The band originally featured the great Walter Payton on drums with Hampton and McMichael and members of the Chicago Blackhawks.

Now it’s primary members are ex-Bears Hampton (on bass and vocals), Otis Wilson (vocals) and McMichael (guitar, vocals). The group reformed in 2013 to play a music fest and has had about 130 shows since then. The group plays an array of standards and some originals.

“What we do is parodies,” Hampton said. “It’s a fun thing. We tell stories about Ditka.”

Then Hampton burst out in song, to the tune of Pink Floyd’s “The Wall.”

Hampton had his 15th knee surgery during his final year in the NFL in 1990, after which he was selected for the George S. Halas Courage Award, given to the player or coach who has “performed with abandon despite injury” by the Pro Football Writers Association.

“You know, I fell out of a tree when I was a kid and spent four months in a wheelchair,” Hampton said. “So I got used to overcoming things. Yeah, I’d do it again in a heartbeat.”

Hampton knew it was his time to retire after the 1990 season.

“It was one of those deals like a dude crossing the desert,” he said. “He crawls at the end. That was me. It was worth it. But I’m glad it’s over.”