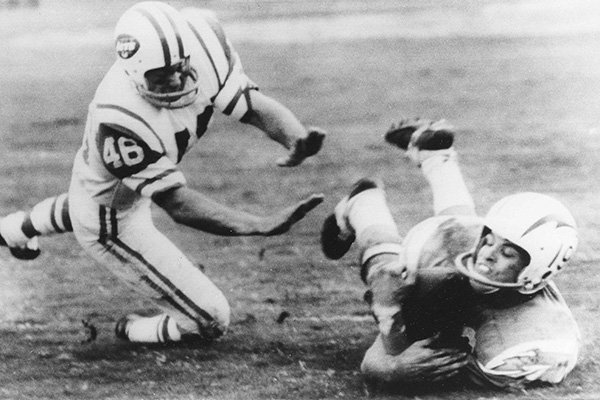 FAYETTEVILLE — When you grow up in an area called Hog Chain, no matter the state, perhaps you’re destined to wind up as an Arkansas Razorback.

Pro Football Hall of Fame receiver Lance Alworth might not have gone to the University of Arkansas after his career as a Brookhaven High Panther just north of Hog Chain, Miss., but for a quirky rule that was somewhat reflective of the Deep South in the late 1950s.

“Well, I was going to Ole Miss and I got married in high school,” Alworth recalled in a recent phone interview. “And Ole Miss at that time didn’t take married football players.”

But, this being the SEC, the Rebels were willing to massage their rule for the standout multisport star with blazing speed.

“They did meet with me right before I signed with Arkansas and told me, ‘Well, you know, you are a baseball player. We’re gonna give you a baseball scholarship and you just happened to come out for football,’” Alworth said.

Alworth didn’t bite on that offer, but he took a chunk out of the Southwest Conference the next few years as a running back and pass catcher with speed and agility unmatched in his day.

“I was like, ‘I don’t want to be the first one to do something like that,’” Alworth said of the sly Ole Miss offer. “So I went up to the University of Arkansas with Frank Broyles, and I was very happy about it.”

So were Razorback fans.

Alworth helped Arkansas win or share three consecutive Southwest Conference titles (1959-61) before going on to star in the fledgling American Football League and later the NFL in a dazzling 11-year career.

Alworth was selected by the Arkansas Democrat-Gazette as the No. 1 Razorback to ever play pro football.

“It’s been such a long time ago,” Alworth, 79, said from his home in Del Mar, Calif., about his career with the Razorbacks and in professional football. “Being a Razorback was a big part of my life. I went to the university and we had some great teams and great teammates. We played well for Coach Broyles, and he did a super job coaching us. I enjoyed my time there like all the guys, and truthfully I miss seeing them. I don’t talk to them very often.”

Alworth, a seven-time AFL All-Star with the San Diego Chargers, won a Super Bowl ring with the Dallas Cowboys after the 1971 season. Alworth caught a 7-yard scoring pass from Roger Staubach for the first touchdown of Super Bowl VI, and the Cowboys — led by their legendary “Doomsday Defense” — went on to claim a 24-3 win over Miami for their first Super Bowl title. The Cowboys’ other touchdowns came on Duane Thomas’ 3-yard run and Mike Ditka’s 7-yard catch from Staubach.

“I don’t think it was really anything special that was a highlight, other than just being on some great teams with great coaches and great players,” Alworth said with his typical humility. “Being able to play in the Super Bowl and making that. I have my Super Bowl ring.

“Then being fortunate enough to be voted into the Hall of Fame. I feel good about the way that I played. You look back at it, and it’s something that you feel very, very fortunate to have been able to do. It’s just a God-given ability. You either have it or you don’t have it, and He gives it to you, so you have to be very humble and very thankful.”

After an All-American season at Arkansas in 1961, Alworth was much in demand by the competing professional football leagues. He was chosen with the No. 8 pick of the NFL Draft by the San Francisco 49ers, and the No. 9 pick of the AFL Draft by the Oakland Raiders, who quickly traded his rights to the Chargers.

Alworth conducted his own negotiations with the franchises.

“Of course the AFL had already told me I could have a no-cut contract. So I said, ‘Thanks but no thanks.’ I hung up the phone and never talked to them again. I was their No. 1 draft choice.

“It’s amazing. I was shocked after the years went by. I wasn’t shocked at the time. All of the guys did their own negotiations at that time. It wasn’t an awful lot of money, as you can tell.”

Alworth caught three touchdown passes as a rookie, then quickly emerged as a star in a Chargers offense sparked by trend-setting Coach Sid Gilman and quarterback John Hadl. He caught 61 passes for 1,205 yards and 11 touchdowns, all franchise records, in 1963 and was voted the league’s MVP by UPI.

Alworth earned the first of seven consecutive AFL All-League honors in 1963. He had four catches for 77 yards, including a 48-yard touchdown, in the Chargers’ AFL Championship Game win over the Boston Patriots.

His fame was widespread during the 1960s based on feats such as a pro-football record seven consecutive seasons with 1,000-plus receiving yards. Alworth led the league in catches, receiving yards, receiving touchdowns and total touchdowns three times between 1963-69, and he became the first AFL star featured on the cover of Sports Illustrated.

Alworth, wearing his No. 19 jersey, was depicted going to the grass to make a catch on the cover of Sports Illustrated’s Dec. 13, 1965, issue with “Top Pro Receiver: San Diego’s Lance Alworth” as the headline.

Alworth was ranked No. 31 on a list of the top 100 players in NFL history by The Sporting News in 1999. He was selected the No. 4 wide receiver in pro football history — behind Raymond Berry, Don Hutson and Jerry Rice — in the NFL Network’s celebration of the NFL’s 100-year anniversary in 2019.

“There’s so many talented guys,” Alworth said. “I just felt very fortunate to be among the 100, much less being so-called 31. It’s a great honor, and I go back to the same thing. You’re very blessed with talent or you don’t have it.”

Alworth’s graceful style and exceptional speed won over fans and teammates, and it earned him the nickname Bambi, which Alworth said came from Ole Miss grad and Chargers teammate Charlie Flowers.

Later in his career, teammates shortened the nickname to Bam, which Alworth took as a signal he was getting older.

Alworth finished his professional career with 10,266 yards and 85 touchdowns, including 40 in a three-year stretch from 1964-66.

“He had an exceptional set of skills,” Jerry Magee, who covered Alworth for the San Diego Union, told the Union-Tribune newspaper in a 2014 story. “He had this great ability to leap. It was like he had eyes in the back of his head. The timing of his leap and his ability to pick up and catch the ball was unparalleled. Plus, he was so graceful. He established that football didn’t have to be brutish.”

Alworth made the news in 2013 when his Super Bowl ring from his time with the Cowboys, stolen from a friend’s restaurant in 1988, was recovered and returned to him by the San Diego County sheriff’s office.

“It’s a miracle to have it back after all these years,” Alworth told The Desert Sun of Palm Springs, Calif., at the time.

Alworth remained in the San Diego area and founded All Aboard Mini Storage after his retirement.

“I built them from Florida to Hawaii,” Alworth said. “It was very, very good for me. We built quite a few projects across the country, and I was very fortunate to make a deal with some people that have done a great job of not only running my stores but running theirs.”

Alworth sold his company a few years back for a reported $196 million, according to the website StorageFront, and it is now known as Extra Space Storage.

Alworth was chosen to the UA All-Century Team in 1994, and was chosen as a back to the school’s All-Decade team of the 1960s.

In 1978, Alworth became the first AFL player to be inducted into the Pro Football Hall of Fame. He was presented by Davis, who was then the Oakland Raiders’ owner.

Alworth was inducted into the Arkansas Sports Hall of Fame in 1979, and into the UA’s Hall of Honor in its inaugural Class of 1988.