Redskins select Curl in 7th round 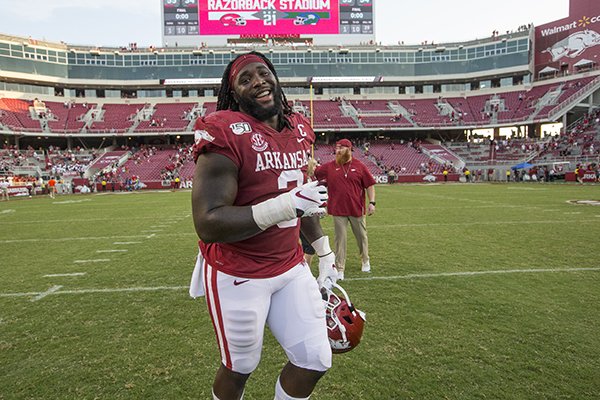 FAYETTEVILLE -- It all happened so quickly for McTelvin Agim late Friday night.

While watching the late third round of the NFL Draft, he stepped outside of his family home in Texarkana, Texas, to grab some fresh air just before 10:30 p.m.

Then his phone rang, and the voice on the line told him to hang on for Denver Broncos President and General Manager John Elway.

The Broncos had made Agim, the former defensive tackle for the University of Arkansas, their third-round selection and the 95th pick of the draft.

"I'm not going to say it was intimidating, but it's like he's one of the greatest ever," Agim said Saturday afternoon. "He's almost looked at as a mythical being in a sense.

"It's like, this dude is on the phone right now. Like John Elway, THE John Elway. The comeback king. Mr. Clutch is on your phone right now. I've seen him on so many like NFL 100s or NFL top 10s. It was crazy. It was a surreal feeling honestly."

Agim was the first of two Razorbacks taken in the 2020 NFL Draft, held in virtual settings across North America.

On Saturday, junior safety Kamren Curl, an early declarer for the draft, was taken by the Redskins with the second pick in Round 7, the 217th choice overall.

Agim and Curl extended the Razorbacks streak to 25 consecutive years of having at least one player taken in the draft. That's the fourth-longest active streak among SEC teams.

Agim was the ninth defensive tackle chosen and the 37th SEC player picked out of a record 40 from the conference in the first three rounds.

Broncos Coach Vic Fangio said Agim would start off being "one of the guys" on the defensive front.

"We'll see how he develops and where exactly he could fit in," Fangio said. "He's a guy who needs developing. He's not a complete player at this point. But we do like some of the tools that he has, some of the potential he has. Hopefully we can develop him into a guy who can compete to make our team, and if he does, to contribute."

Agim said he was hit with emotions while talking to Elway.

"I was like, 'Dang, I'm on the phone with John Elway and I'm crying,'" he said. "I can't even express the gratitude that I feel right now. This was John Elway. It's like John Elway had faith in you."

As Agim went inside, his family members started crying with him.

"They were ecstatic, excited," Agim said.

Curl is the 16th Arkansas player taken by the Redskins and the first Razorbacks defensive back selected in the draft since Tevin Mitchel went to Washington in 2015. He was the first Arkansas underclassman drafted since Hunter Henry and Alex Collins in 2016.

ESPN analyst Mel Kiper Jr. believes the 6-1 Curl will be a developmental player and started his on-air critique by saying Curl didn't "wow" him.

"He looks the part," Kiper said. "He's over 6-1 at 206 pounds with long arms and a 34 1/2 vertical. Good upper body strength. Didn't always play as physical as you wanted. But he has that versatility though. You like the fact he played corner early on and made plays in coverage. I think he really has some developing to do overall."

Five of the last 21 Razorbacks taken in the NFL Draft went to the Redskins, starting with kicker Zach Hocker as a seventh-round choice in 2014, followed by linebacker Martrell Spaight (fifth) and Mitchel (sixth) in 2015, and tight end Jeremy Sprinkle (fifth) in 2017.

Former Razorbacks who agreed to free agent deals Saturday include Harris with the New England Patriots, Harrell with the San Francisco 49ers, defensive tackle T.J. Smith with the Los Angeles Chargers and offensive guard Austin Capps to the Atlanta Falcons.