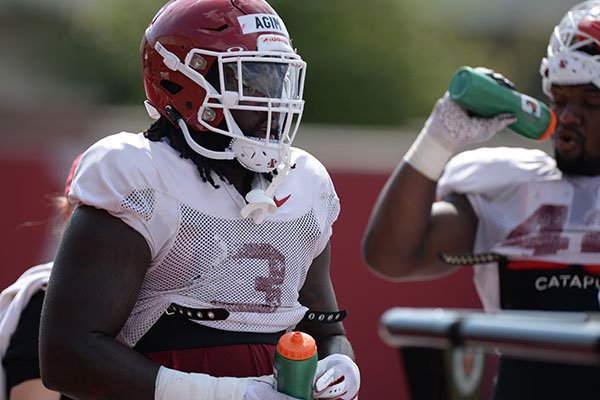 LITTLE ROCK — Although never particularly popular with All-SEC voters, one of Arkansas’ rare five-star recruits ended an NFL draft drought that dovetailed with the Razorbacks’ accumulation of pathetic defensive stats.

One NFL prospect does not guarantee a college defense will succeed, but the Razorbacks did not have a defender chosen among the first 100 picks in the draft from the time the New England Patriots selected Jake Bequette deep in the third round of 2012 until the Denver Broncos used the 95th pick to choose McTelvin Agim on Friday night.

Reviewing the first three rounds of the drafts from 2013-20, Arkansas trailed the other SEC teams 109 defensive players to 0 in top 100 picks before Agim was chosen.

No surprise, Alabama and LSU provided the largest number of those athletes, but every other league team contributed at least two players to the SEC total.

Football is a team game and there is plenty of blame to go around for the 11-45 conference record during the seven years of Bret Bielema and Chad Morris, but the defensive statistics posted in six of those seasons are graphic.

On top of giving up a slew of points, Arkansas allowed an average of 413 yards per game or more five out of the seven seasons

The relationship between talent and defensive prowess is undeniable. For example, eleven times during the 2013-19 seasons, Alabama and LSU won at least 10 games. Those Crimson Tide defenses were ranked in the top 10 in scoring defense five straight years and were never worse than 13th, and the Tigers’ defense was in the top 30 five times.

In the name of transparency, LSU’s national championship team in 2019 did not finish in the top 30, but Heisman Trophy winner Joe Burrow was impeccable and the Tigers led the nation in scoring.

For those interested in draft specifics, 42 of the SEC’s 109 defensive selections were first-round choices, including a half-dozen last Thursday.

Nine of the 42 first-round picks were from Alabama, eight from LSU, seven from Florida and five from Georgia.

Oddly, the only two No. 1 defensive picks from the SEC were South Carolina’s Jadeveon Clowney in 2014 and Texas A&M’s Myles Garrett three years later.

Defensive end Jamaal Anderson was the last Arkansas defender picked in the first round. The year was 2007.

Highly touted from the moment he signed on with Arkansas, Agim started the last five games of his freshman year and made the All-SEC Freshman team, but did not crack the two-deep on the All-SEC team picked by the coaches or the media in his last three years.

Occasionally, voting for the All-SEC team might be influenced by team win-loss records or something else, but the folks who render judgments about college athletes are paid handsomely to get it right so the assumption is that Agim has the skills necessary to compete with the best.

That said, the talent scouts are not infallible. Annually, arrival of the draft prompts a review of the biggest busts in the draft, including the surprising flop of former LSU quarterback JaMarcus Russell, No. 1 pick in the 2007 draft who completed almost 64 percent his senior year, including 14-of-22 for 210 yards against Arkansas in Little Rock.

In September 2015, an ESPN staff writer rated Agim the No. 9 prospect in the 2016 recruiting class and said the Hope High School athlete was “the most significant commitment for the Razorbacks in a decade.” At the time, ESPN had been doing the three-, four-, five-star rankings for seven years and Agim was the first of almost 100 five-star players to pick Arkansas.

Arkansas defensive coordinator Barry Odom, who coached safeties at Missouri for three years and was the Tigers’ defensive coordinator in 2015, knows what is required to play solid defense in the SEC and he will be in lock step with head coach Sam Pittman, who has promised an emphasis on fundamentals.

Teaching technique is one thing; Arkansas’ talent is the question.