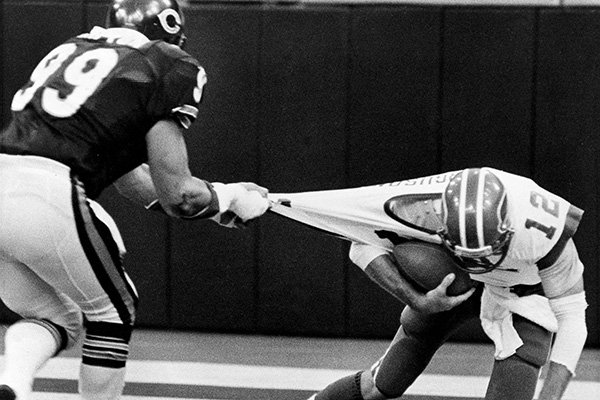 FAYETTEVILLE — The weekend of March 13-15 was awash with big brainstorming sessions for the sports department at the Arkansas Democrat-Gazette.

With sports across the globe initially being suspended and then canceled, we had to come out firing with a plan the following week as breaking news would be slowing to a trickle, and we needed good content to fill the daily sports section.

We initiated a multi-pronged plan to keep the sports section lively and flowing, interspersed with stories that sprang from teleconferences arranged by Kyle Parkinson and his communications staff in the University of Arkansas athletic department.

Top 10 lists are always go-to ideas for providing discussion and debates, in not just the sporting world, but throughout the breadth of media and entertainment.

We thought a natural list would be the best Razorbacks to ever play pro football, a project sports editor Jason Yates thought would be a natural lead-up to the NFL Draft, which started Thursday and ended Saturday.

I jumped on the idea a few weeks ago, and let me say it has been fun, insightful and challenging, a real labor of love to have researched and compiled the list. The all-time pro Razorback team the Arkansas Democrat-Gazette is presenting today, following our top 10 countdown the last two weeks, was not the result of grueling polling or fan responses.

Given the time constraints we were working under, the compilation was streamlined. I received great input from a number of sage sports writers in our midst, such as Wally Hall, Nate Allen, Clay Henry, Bob Holt and Matt Jones, whose knowledge of the Razorbacks compares favorably with the best there has ever been. If only Orville Henry, Jim Bailey, Frank Broyles and a few others could have been consulted, the input would have been closer to perfect.

Of the 355 Razorbacks who had joined the professional ranks as of Saturday morning, we took a good look at the credentials of roughly 70 players and drilled down hard on around 40 to determine our top 10 list.

The graphic that accompanies this story is one version of an all-time Arkansas Razorbacks in the pros stating lineup. It includes some special auxiliary spots like team executive Jerry Jones and Coach Jimmy Johnson, both starters on the Razorbacks’ 1964 national championship team for Broyles who went on to produce multiple Super Bowl victories with the Dallas Cowboys. One of their teammates from 1964, offensive tackle Glen Ray Hines, made the team based on his 93 starts with the Oilers, Steelers and Saints, and he was such a strong contender for the top 10 he made our “first four out.”

Note the criteria. Selection to this team was based on their production playing professional football.

Darren McFadden might be the most decorated Razorback collegian of all time, and certainly is the top college Hog for my money. The two-time Doak Walker Award winner and two-time Heisman Trophy runner-up probably should have won the 2006 Heisman, but bloc voting that year favored Ohio State quarterback Troy Smith.

McFadden is rightfully in the College Football Hall of Fame, and he is included in our team’s starting lineup.

However, the Little Rock native did not make our top 10 list because his credentials as a pro did not quite stack up with the competition.

Every member of the top 10 made first- or second-team All-Pro or played in at least one Pro Bowl, with the top four on the list — Lance Alworth, Dan Hampton, Steve Atwater and Jason Peters — accounting for 28 appearances in that NFL postseason game. Every member of that top quartet also played on at least one Super Bowl winning team.

Alworth, Atwater and Hampton have been voted into the Pro Football Hall of Fame — with Atwater’s induction scheduled for August — along with the aforementioned Johnson and Jones. Atwater and Johnson are part of the hall’s “Centennial Class,” celebrating the 100th year of the NFL.

Peters, a nine-time Pro Bowler who was an undrafted free agent signed by the Buffalo Bills after the 2004 NFL Draft, appears headed toward the hall after completing his 16th NFL season last fall with 13 starts at tackle for the Eagles. Peters, a combo tackle-tight end for the Razorbacks, has started an incredible 195 out of 205 NFL games played.

Wayne “Thumper” Harris presented an interesting quandary. He didn’t play a down in the NFL, but he’s a legend in the Canadian Football League, where he spent his entire 12-year career racking up eight CFL All-Star appearances. Harris won the MVP trophy in the 1971 Grey Cup after leading Calgary to a victory over Toronto. He’s in the CFL Hall of Fame and the College Football Hall of Fame and holds a deserving No. 5 spot on our top 10 list.

Eight members of the top 10 made the UA’s All-Century team as voted on by fans for the 100th season of Razorbacks football in 1994. The only two not on the All-Century team — offensive linemen Peters and Shawn Andrews — played in the 2000s. Andrews was selected for Arkansas’ All-Decade Team of the 2000s, along with McFadden and two other members of this team: cornerback Chris Houston, and two-way standout George Wilson.

The UA has not unveiled its Team of the Decade for the 2010s, but Jarius Wright, the school’s all-time leader with 2,934 receiving yards leader, would seemingly be a lock for that team. He joins Alworth and Jim Benton, the Razorbacks’ first big NFL star, in the starting lineup receiving corps.

Choosing the top 10 got tough after Benton in the No. 8 spot. R.C. Thielemann, a three-time Pro Bowler who played on Broyles’ final team at Arkansas, was No. 9, and Billy Ray Smith Jr., a Fayetteville-born legacy who was chosen No. 5 in the 1983 NFL Draft by the San Diego Chargers, was No. 10.

Speaking of Chargers, that franchise has seemingly been home to the largest number of pro Hogs, including Alworth and Smith, the bookends on our top 10, as well as solid pros like Gary Anderson, Raylee Johnson, Bobby Duckworth and Danny Walters. Current Charger Hunter Henry did not make our starting lineup — edged out by 11-year pro Preston Carpenter of the 1950s Hogs — based on limited years in the league, but of all the current Razorbacks in the NFL, he seems the most likely to play his way on to the next version of this project.

The quarterback on the team is Joe Ferguson, who played 17 years in the NFL, mostly with the Buffalo Bills, but also with the Lions, Buccaneers and Colts and came back to campus to coach quarterbacks from 1997-2000 for both Danny Ford and Houston Nutt.

Ferguson, selected at No. 14 on the list of all-time greatest Buffalo Bills last summer by the Democrat and Chronicle of Rochester, N.Y., is also a Bills Wall of Fame inductee (1995).

Ferguson is bunched in the “first four out” category of our top 10, along with Hines, McFadden and safety Ken Hamlin.

Comparing credentials is a clearly subjective task. For instance, distinguishing between Hamlin and fellow safety Kenoy Kennedy, who preceded him by three years in the Arkansas secondary, was difficult. Hamlin, a nine-year pro with one Pro Bowl appearance, had 489 tackles and made 96 starts in 107 career games.

Kennedy had 550 tackles and made 99 starts in 115 games. In the end, both made the team in a five-defensive back package. If the offense can have 12 members, so can the defense.

Alworth and Hampton discussed the origins of their nicknames for this project.

Prior to his time in the NFL, Hampton had been given the nickname “Chief,” based on the character in the Ken Kesey book and movie One Flew Over the Cuckoo’s Nest, due to his stature and partial Native American heritage, but he gained a new one in the NFL.

“I get here and then that ‘Danimal’ thing got going with John Madden giving me the name,” Hampton said. “It’s funny. When I go to the stadium or whatever and I’m on the sidelines and people are screaming ‘Danimal!’ It’s kind of cool. In a way I’ve kind of run with it. I do Chevy ads up here and I say, ‘Tell them Danimal sent ya’ and that kind of thing.”

Alworth’s nickname seemed appropriate for a player whose speed and grace seemed almost out of place for what had been a mostly roughneck sport prior to his arrival.

“I got that from Charlie Flowers, who was from Ole Miss,” Alworth said of the bestowing of Bambi. “Charlie was a fullback here for the Chargers. He looked over at me and said, ‘Well, you’ve got big brown eyes, don’t have much hair, you run like a deer. I’m going to call you ‘Bambi.’ I was like, yeah, thanks a lot. So that’s what everybody started calling me.

“I knew I was getting older after about the sixth or seventh year and they’d call me ‘Bam’ all the time. … It was just very unusual to have a name like that. It was just one of those things that sort of stuck.”

The highest-drafted Razorback ever, Lamar McHan, had a solid NFL career, but it was not as productive as Ferguson’s. The No. 2 pick of the 1954 NFL Draft by the Chicago Cardinals, McHan passed for 9,449 yards and 73 touchdowns and rushed for 849 yards and 12 touchdowns in 10 seasons with the Cardinals, Packers, Colts and 49ers. However, he also completed just 42.3 percent of his passes and threw more interceptions than touchdowns.

The all-time Hogs in the pros project obviously stirred up some sentimentality among the legions of Razorback fans as it generated a healthy number of emails.

My thanks to all those who helped assemble the team and who read about it and commented along the way. I hope you enjoyed reading about these Razorback greats as much as I enjoyed researching, talking to and writing about them.