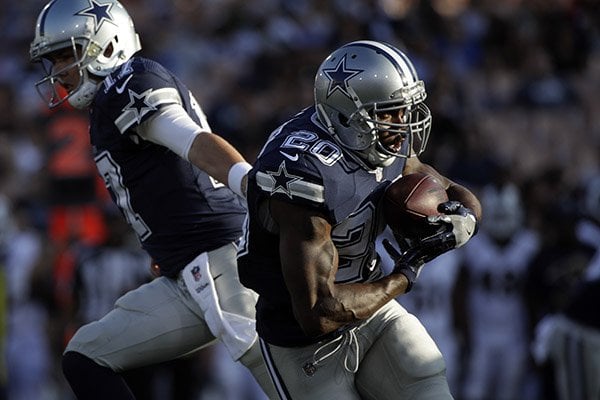 A lot of time and effort went into the just-completed feature of the top 10 University of Arkansas Razorbacks who played professional football.

The idea was our man Tom Murphy’s, and long before the tedious chore of finding and interviewing the guys, Murphy spent long hours polling people.

Once the series started, it was explained many times in emails, that yes, the greatest Razorback football player ever was Darren McFadden, a two-time runner up for the Heisman Trophy.

In three seasons with the Razorbacks, he rushed for 4,590 yards (an average of 5.8 yards per carry) and 41 touchdowns.

Then he was the No. 4 overall pick in the 2008 NFL Draft and unfortunately went to the Oakland Raiders.

For seven long seasons he was either running behind an inept offensive line or was injured.

He spent the final three seasons with the Dallas Cowboys, became the starter in 2015 and ran for 1,089 yards.

The last two seasons were spent backing up Ezekiel Elliott.

While he didn’t make the top 10, he was the No. 1 running back in today’s story on what would be the starting line-up of former Razorbacks who played professionally.

Because it was chosen as a professional team, the choice for head coach was Jimmy Johnson, although arguments were made for Barry Switzer.

They and Pete Carroll are the only coaches to win college national championships and a Super Bowl, although Southern Cal vacated Carroll’s 2004 national title because of recruiting violations.

Because Murphy did a lot of polling and research, this team is mostly hard to argue with.

Most of us never saw Jim Benton, who played from 1938-47, but those who did never forgot him.

Probably one of the most impressive things about this team is not only did Shawn Andrews and Jason Peters make it, they were Razorbacks teammates lining up side by side on many downs.

Andrews was the most athletic offensive lineman yours truly ever witnessed.

His freshman year he was doing the drill where you run through a series of ropes. Honestly, Cedric Cobbs wasn’t much better at flying through those ropes without so much as a hitch in his stride.

Joe Ferguson is probably one of the most unheralded NFL quarterbacks in history. He passed for 27,590 yards for the Buffalo Bills on team that featured O.J. Simpson running the ball on most downs. Ferguson threw for 29,817 in a 17-year pro career.

Football fans like big hitters, and none were bigger than those two.

There were others of course who are hall of famers.

Getting this team put together was probably harder than arriving at the top 10, although in the initial stages Murphy, being thorough, made a few changes and even added Wayne Harris after reading about his career in Canada.

Harris could have played in the NFL but loved Canada and settled there in retirement, a long way from his El Dorado roots.

Of the entire team, yours truly was blessed to cover all or part of 19 of these players.

It was fun to read the names and remember the games.

It was a job well done by Murphy and for the right reason, for our readers. For everyone to have some football during a time when sports is in a time out as we struggle through the coronavirus.