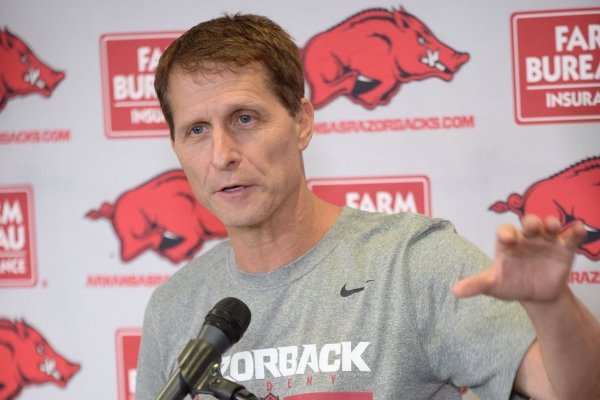 Arkansas’ virtual tour with Florida wing Michael James on Monday was informative and rewarding for the touted basketball prospect.

James, 6-6, 195 pounds, of Orlando Oak Ridge High School, received a a scholarship offer from Coach Eric Musselman near the end of the tour to go along with others from North Carolina State, Virginia Tech, St. John’s, Cincinnati, Oklahoma State, Texas A&M and others.

“It was kind of quick probably lasted around 30 minutes,” James said. “They were basically going through the coaching staff, the coaches’ history. Coach Musselman has been an NBA coach. He has a lot of experience. They went through every coach through the staff. Coach Williams was an NBA player and played with Michael Jordan. All the way down to the nutritionists, the weight trainers, everything.”

Style of play, facilities and an offer was next on the agenda of the tour.

“After that we got to talk to coach Musselman and that’s when the offer came. I was really thankful for the opportunity.”

James, who Prep Hoops rates as the No. 9 prospect in Florida, also received an offer from Alabama on Monday.

The Razorback coaching staff is what stood out to James.

“Every coach down the line has had a lot of experience,” said James, who surpassed 1,000 career points in high school this past season. “Mainly with me, coach Musselman, I didn't know coming in that he was an NBA coach. He coached the Warriors and a couple of other teams. I didn't know that so for them to show me that and to find that out about him, that’s just so big for him to believe in me and offer me as an NBA style coach.”

He said the Hogs would use him at the 2-3 spots should he be a Hog. James easily connected with Musselman

“He’s a cool guy,” James said. “I liked him. We didn't talk long, but from that short time we talked I could feel his vibe and his energy. He’s the type of guy. I would like to be around.”

James, who has a 4.0 grade point average, is looking to study sports management or kinesiology in college. Once the NCAA dead period is over, James would consider a visit to Fayetteville.

“That's for me and the coaches to talk about, but I’m definitely interested,” he said.