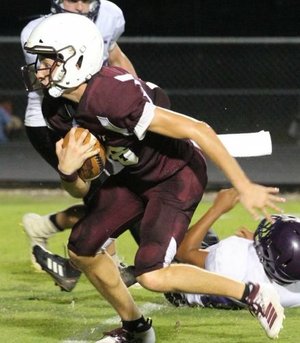 Arkansas is already showing interest in a promising in-state freshman.

Prescott quarterback Carston Poole, 6-2, 170 pounds, has caught the attention of the Razorbacks despite only playing limited varsity snaps on defense and special teams during the Curley Wolves' playoff run that ended in the Class 3A state semifinals.

Poole completed 57 of 74 passes for 1,225 yards and 19 touchdowns and rushed 27 times for 315 yards and 10 touchdowns to lead the Curly Wolves' junior high squad. He played mostly one half in nine games.

“First of all, you’re not going to outwork him,” Prescott Coach Brian Glass said. “He’s a super-hard worker. He goes hard all of the time and really doesn't know anything but full speed. He learns real well. Anytime you try to introduce him any kind of new schemes, he catches on real quick.

“Good leader on the field. He has a great demeanor and doesn’t get rattled. He just wants the ball in key situations and makes plays.”

Poole played his best in the biggest game of the season.

“Our toughest game in junior high was against Camden Harmony Grove for the championship and that was his best game,” Glass said. “That’s when he really stepped up and shined when we needed him the most.”

Glass expects Poole to get some snaps at quarterback. He also has the ability to play several other positions.

“He’s going to help us somewhere on the football field, offensively and defensively,” Glass said. “He’s a guy that can play a lot of different positions.”