On this date in Razorback history, April 29 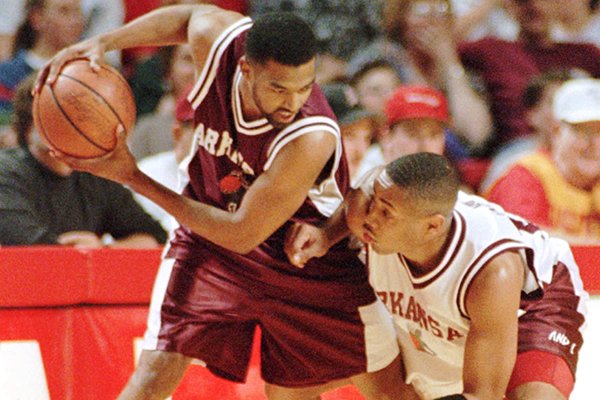 Nearly four weeks after Arkansas' loss to UCLA in the national championship game, more than 20,000 people showed up at Bud Walton Arena to watch the primary members of the Razorbacks' three most recent trips to the Final Four play for bragging rights in a benefit game.

Led by Todd Day's 41 points, the 1990 Razorbacks defeated members of Arkansas' national championship team by a final score of 159-156 in the Yvonne Richardson Memorial Game to benefit cancer research.

Yvonne Richardson, the daughter of then-Arkansas coach Nolan Richardson, died of leukemia in 1987.

The benefit game featured a who's who of Razorback players in the decade. The 1990s team included Day, Lee Mayberry and Oliver Miller - all NBA players at the time - as well as Isaiah Morris and Arlyn Bowers. Mayberry scored 35 points and Morris' basket with 1:12 remaining gave the '90 Hogs the lead for good.

All five of Arkansas primary starters from the 1994 national championship team played in the benefit game, including Corliss Williamson and Scotty Thurman, juniors who had declared for the NBA Draft earlier in the month. Williamson scored 29 points and Thurman's 60-foot heave at the buzzer fell short.

The teams rematched the following year, with the '94 Razorbacks winning another close one, 157-154.