Guy-King eager to get back on court 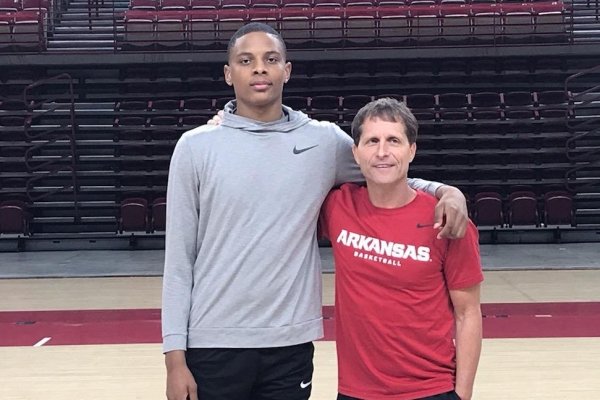 FAYETTEVILLE — Little Rock Mills sophomore basketball standout and Razorbacks recruiting target Javion Guy-King (6-5, 190) has a Class 4A state co-championship to his name, but would rather have earned it a different way.

Mills (28-3) and defending champ Magnolia (26-0) were scheduled to meet for the title on March 13 at the Hot Springs Convention Center, but concerns over the coronavirus wiped out the game, and both were declared co-champions.

“I would have liked to have played the game and won it on the court,” Guy-King said Wednesday. “It would have been a great game. Both teams were playing great.”

“There’s no doubt that I think the 2022 class is the best class,” Guy-King said. “We have a lot of bigger guys and most of us are still growing. I think we all have a lot of potential and we are still young, but we can compete with anybody right now.”

Guy-King has offers from Arkansas and Alcorn State and interest from schools such as Vanderbilt, Ole Miss, Alabama and Auburn.

He has developed a good relationship with Arkansas coach Eric Musselman and assistant coach Corey Williams, whose Razorbacks went 20-12 this past season.

“I think they did a real good job with the sets they were running, their defense was on point and they were leading the SEC in a lot of things defensively and on offense. I think it is just a well-run organization.”

Other colleges have been in contact with Guy-King in the past week.

“I talked to Vanderbilt the other day and the first game back they were going to be there to watch,” Guy-King said. “They said that I basically had an offer, but they want to go to a game before making it official.

"I also talked to Ole Miss today and they told me they want to get me up on a visit and the same deal where they want to watch me play.”

Guy-King did not get to take the court this past season until mid-January due to a transfer rule, but he is hopeful that at least part of the summer AAU season will be played after the spring sessions were canceled.

“I am very eager to get back out there and play,” Guy-King said. “It really pushed me back not being able to play half the year. I was kind of out of rhythm when I first came back, but towards the end of the season I was back in rhythm.”

Along with Ford, Guy-King is set to play with Team Thad and is staying ready in case AAU basketball moves forward.

“I have been doing daily workout plans, getting shots up outside, staying active while running around the neighborhood,” King said. “I have been just trying to stay in shape for when we are able to get back on the court.”

Guy’s father, Tony, was a standout athlete at Newport High School, but has tried to let his son carve out his own niche.

“He has helped me a lot, but also let me create my own path,” Guy-King said. “If there is something wrong, he will help me fix it.”

Guy-King knows his game is in a stage of development.

“I think I rebound real well, push it, can get it to my teammates and also score at will,” Guy-King said. “I think I need to work on finishing around the rim, floating it over bigs and things like that, and also tightening my handles up.”