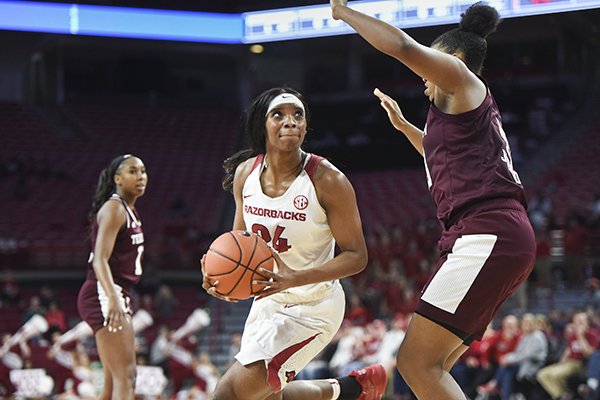 Arkansas' Taylah Thomas (24) looks to shoot during a game against Texas A&M on Thursday, Jan. 2, 2020, in Fayetteville.

University of Arkansas women's basketball Coach Mike Neighbors loves the roster he has returning, despite some pieces getting shuffled around.

But he didn't mince words about needing players to step forward to help senior Taylah Thomas inside.

Erynn Barnum, who will be a redshirt sophomore, along with sophomore Destinee Oberg and freshman Destinee McGhee are the post options to help spell the 6-1 Thomas.

"We need one of them to come back in the best shape of their lives, ready to be competitive with each other without being overly competitive," Neighbors said. "The battle for playing time is hard. We need those kids to understand there's a role to be filled."

The Razorbacks were 24-8 overall and 10-6 in the SEC last season, and they were poised for an NCAA Tournament bid before the postseason was canceled by the coronavirus pandemic. They finished the season ranked No. 24 in The Associated Press poll and No. 25 in the USA Today coaches poll.

It was only the third time Arkansas finished with a winning SEC record, joining the 2011-12 team (10-6) and the 1994-95 team (7-4). The Razorbacks won 10 SEC games for just the second time in program history. Those 10 SEC victories are more than Neighbors' first two seasons (nine) combined. They also finished in a four-way tie for third place in the regular season.

They did struggle in rebounding. Arkansas was outrebounded (42.2-37.5) by almost five rebounds per game for the season, but that margin jumped to (42.2-34.6) to nearly eight per game in SEC play. Losing 6-1 senior Kiara Williams to graduation makes it necessary for Barnum, Oberg and McGhee to produce.

The athletic Thomas has solidified her position after starting all 32 games of her junior season, Neighbors said. Her 21-rebound effort against New Orleans was one shy of tying a school record.

"Taylah proved that she can play beyond 20, 22 minutes if she has to, but we're a better team when she can play like she did last year," Neighbors said. "So incredibly hard for 20 to 22 minutes a night. And she's as efficient in 22 minutes as she might be in 30 minutes because she's not pacing herself."

That opens the door for more minutes for Barnum, who averaged 11.4 minutes per game last year; Oberg, who played in only eight games last season; or McGhee, a 6-3 freshman.

"I think we're going to see the same jump that we saw last year with Taylah when she came back," Neighbors said. "But we need one of those three kids to come back in great shape, healthy, and sane and ready to go. Ready to be adaptable, ready to be adjustable to whatever happens when we do come back. We need all three of them to be ready, but one of them for sure has got an opportunity to play 15 to 18 minutes a night."

Freshman Elauna Eaton of Nettleton is another player who should fit in nicely, Neighbors said. He expects the 6-0 guard to contribute immediately.

"If you were to draw up a prototypical player for us, it's Elauna," he said. "She can score. She can drive. She can pass. She can defend. You look at the senior year she had and what she did rebounding. So we really implored her to not come in here expecting a freshman transition period. She needs to come in here ready to play."

He's pleased to get senior Jailyn Mason back on the floor, after the 5-9 guard redshirted last season because of an injury. She's started 97 of 98 games in her first three seasons as a Razorback

Neighbors said she will improve the overall team defense, but she's also improved offensively. Case in point, she went off for 41 points in the team's final intrasquad game before everything was shut down because of the coronavirus pandemic.

"I think you are going to see a confident offensive attacker, and bring back to us what we already knew in a tremendous teammate, great leader and somebody that helps us so much defensively," Neighbors said of Mason. "She was our best at what we call fixer on defense. She understood and had a deep, deep grasp of understanding what our opponents were trying to do and an uncanny ability to fix mistakes that we were making or about to make. We get that back."