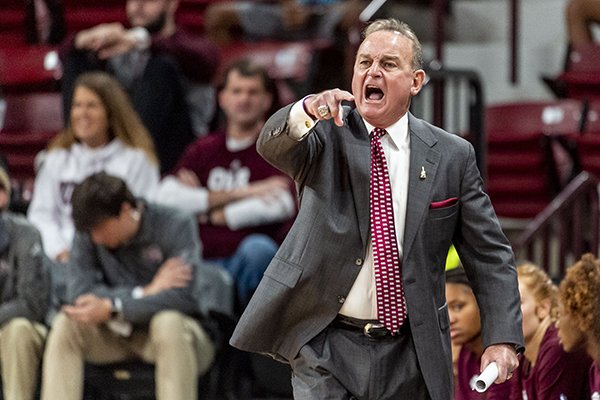 FAYETTEVILLE -- University of Arkansas women's basketball Coach Mike Neighbors is happy he no longer has to play against Vic Schaefer in the SEC.

For one thing, Neighbors and Schaefer have been close friends for more than 20 years, since they worked together at Arkansas on the same coaching staff for Gary Blair.

Another reason for Neighbors to celebrate Schaefer's departure from Mississippi State as head coach is that his Bulldogs were 5-0 against Neighbors' teams.

Mississippi State beat Washington 75-64 in an NCAA Tournament Sweet Sixteen game in 2017 when Neighbors was the Huskies' coach. Then the Bulldogs won their four games against Neighbors' Arkansas teams the past three seasons by an average of 27.0 points per game, including a 101-70 victory in the 2018 SEC Tournament championship game when the Razorbacks were playing their fourth game in four days.

Mississippi State is the only SEC team the Razorbacks haven't beaten at least once with Neighbors as their coach.

So Neighbors' reaction to Schaefer being hired as Texas' coach is understandable.

Mississippi State hired Old Dominion Coach Nikki McCray-Penson, who played at Tennessee and was an assistant coach at South Carolina, to replace Schaefer.

"I'm not saying Nikki is not going to keep it going, but I know what Vic had done improving it," Neighbors said. "Hardest team for us to play against, even mentioning South Carolina. He had built a house there in Mississippi. He had convinced me that was the place he was going to be for the rest of his life."

Neighbors said he had no idea Schaefer was taking the Texas job until Longhorns Athletic Director Chris Del Conte tweeted "Guess who's coming to the Forty ..." with a photo of Schaefer and his family on April 5. "Forty Acres" is a nickname for the Texas campus in Austin.

Schaefer was introduced as Texas' coach on April 6 -- three days after Karen Ashton, a Bryant native, was fired.

"I was floored, absolutely floored," Neighbors said. "I tried to keep up with [Texas' search]. Everybody was predicting who was going. Man, you would have never seen me bet one dollar on Vic."

Schaefer grew up in Austin and is a Texas A&M graduate. He was the coach at Sam Houston State and an assistant for Blair at Texas A&M between his 10-year stint as an Arkansas assistant.

Texas also lured Schaefer from Mississippi State with a contract offer of $2 million per year, according to the Austin American-Statesman.

"It makes sense now when you see all the details of the contract, length, and the security and resources," Neighbors said of Schaefer's move. "Vic is a Texas guy."

It had been speculated that if Schaefer were to leave Mississippi State, it would be for Texas A&M to replace Gary Blair. But Blair, 74, is showing no signs that he plans to retire after 17 seasons leading the Aggies.

"Gary's going to be coaching until he dies," Schaefer said with a smile at SEC media days last fall. "He's got so much passion and energy for the game. And look, he's really good at it by the way."

Ashton, who played at the University of Arkansas at Little Rock, led Texas to a 184-83 record in eight seasons, including four consecutive Sweet Sixteen appearances from 2015-18. The Longhorns advanced to the Elite Eight in 2016.

Texas was 19-11 this season and likely would have made the NCAA Tournament, but Ashton couldn't get the Longhorns to a Final Four and was 1-18 against Baylor and Coach Kim Mulkey.

"I have no doubt Vic will take Texas up a notch," Neighbors said. "They've been to Sweet Sixteens and an Elite Eight [under Ashton] and it wasn't satisfactory, so I know Vic's expectations will be really high and I'm sure they'll live up to them."

Neighbors, a Greenwood native and UA graduate, was the the director of operations for Blair at Arkansas from the 1999-2000 through 2000-01 seasons when Schaefer was the top assistant assistant coach.

"Between Vic and Mike and I, we're sort of like the Three Musketeers," Blair said at SEC media days in 2017 before Neighbors' first season as Arkansas' coach. "We all care about each other and our families."

The Razorbacks are 2-4 against Texas A&M under Neighbors, including SEC Tournament victories the past two seasons.

"I will tell you this -- our friendship was strained playing each other," Neighbors said of facing Schaefer and Blair. "It's not easy to play against people who are not only your friends, but somewhat your mentors.

"Coach Blair, I still talk to him. We have about a one-week waiting period after we play, win or lose. As much as we hate to lose, we're equally as happy if we have to lose it's to each other.

"But it's hard. It can strain your relationship if you let it. I'm glad that I don't have to worry about that with Vic anymore. I can just focus on not straining mine with Coach Blair."

Before Washington played Mississippi State in 2017, Neighbors told the Seattle Times about how close he is to Schaefer.

"Taught his son to play guitar," Neighbors said. "I sat on his couch when I was working for Coach Blair. I spent a lot of years on Vic's couch."

Before Schaefer's mother died in 2004 after being ill, he frequently drove from College Station, Texas, to Houston to visit her. The trips also included many calls from Schaefer to Neighbors.

"I'd call Mike on my way back to College Station," Schaefer said last fall at SEC media days. "Many nights he'd talk me back into town. He's a tremendous friend."

Neighbors said the calls meant a lot to him as well.

"I remember those conversations being important, and it had nothing to do with basketball. That's when you know you're close friends."

Close friends who no longer have to face each other in the SEC.