The world of Woods: Arkansas receiver displays his fun off the field 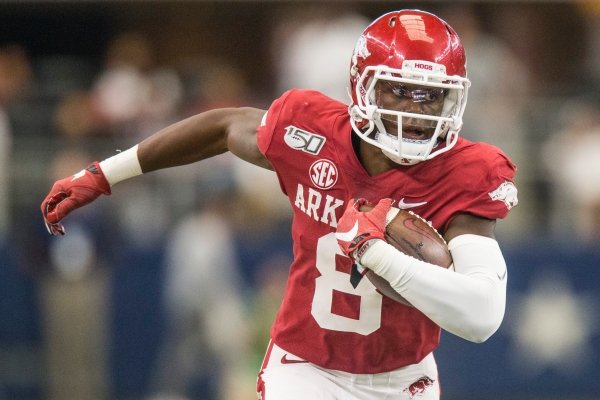 Mike Woods, Arkansas wide receiver, picks up yards after a catch in the third quarter vs Texas A&M Saturday, Sept. 28, 2019, at AT&T Stadium in Arlington, Texas.

FAYETTEVILLE -- Mike Woods displayed a lot more than his pass-catching skills and workout chops this summer.

The University of Arkansas junior receiver looked to have a ton of fun posting videos to his YouTube channel called "WoodVille." The videos feature his editing and dubbing skills and sometimes his camera work. They depict Woods going through drill work with teammates, catching passes from UA quarterback Feleipe Franks, playing a bizarre version of sand volleyball and going hiking and scooter riding with his friend, Olivia, who goes by Liv.

A frequent guest star in the videos is Woods' dog, Draco, clearly a close companion who tags along on most of his adventures.

Woods' outgoing personality and flair for fun shine through the productions, which he calls "vlogs," for video logs.

Woods' posting hasn't been as frequent in the last couple of weeks, as the Razorbacks have incrementally added more hours to their summer workload while gearing up for the start of practice Friday.

At the height of summer, he posted consistent content on his channel.

On a searing July 4th, he hiked Mount Kessler with Liv and Draco, then came back to Kessler Mountain Regional Park the next day for a skills and drills workout with fellow receiver Kendall Catalon and Franks.

In that video, titled "Routes and Drills SEC Edition," Woods proved prophetic when, after Franks said he had watched the hiking video the previous night, Woods replied, "They're gonna love this one because your butt's in it."

Indeed, the video with Franks had received nearly 3,050 views as of Friday afternoon as the most-watched video on WoodVille. Woods had 381 subscribers to the site on Friday.

The wildest video on the site features the most Razorbacks. It's a hot afternoon in the sand volleyball pit at a local apartment complex. But the players are not using a standard volleyball, or even a modified volleyball, for the game.

They're using a 30-pound medicine ball.

"Man, that be heavy boy," fellow receiver Shamar Nash announces on the video, just after catching it and remarking the ball nearly knocked the wind out of him.

Thankfully, apparently no players butted heads, had a ball pound them on the skull, wrenched a back or dislodged a shoulder.

However, Woods highlighted a near-disastrous moment: Him catching a ball just when it was contacting his left knee. With his foot planted in the sand and his leg extended, the weight of the ball nearly caused a hyperextension. Woods picked that very moment, with slowed-down audio and video, to open the "Med ball Volleyball" episode. It is also the screen capture on the title page for the video.

When the actual play took place, giving one team a 3-0 win over Woods' team, he repeatedly calls out, "Y'all didn't see me almost hyperextend my knee!" as receiver Tyson Morris from the winning team celebrates on camera and taunts Woods.

A large number of Razorbacks appeared in that video, posted on July 13.

In another video, Woods, Warren, Catalon and Trey Knox perform drills up the side of the hill on Stadium Drive, just across from the Wild Band of Hogs water fountain. Draco nearly performs a takedown of Warren in one clip.

Woods' channel, which by NCAA bylaws cannot be "monetized," is a good example of the type of content that might one day get the nod of approval from the NCAA for players to capitalize on their name, image and likeness.

Should the NCAA pass NIL legislation to allow players to use their skills, artistic talent or other traits, a player like Woods, if he built a large audience, could theoretically attract advertisers to the channel and make money.

"He can do this," Fagg said. "This is not using your name, image and likeness. He's not using it for profit. If he's monetizing it, then he has an issue -- currently. ... For Mike, this is chronicling his life."

The coronavirus pandemic has slowed discussion on the NIL front just as it was seemingly about to make its way into NCAA legislation.

The Razorbacks recently had another player who liked to show his interests on video: All-America center Frank Ragnow, a first-round draft pick by the Detroit Lions in 2018.

Ragnow came up with Grizzly Man Outdoors while playing for the Razorbacks. He posted videos, mostly of his fishing and hunting exploits, to his channel.

Ragnow explained the creation of his channel in a video with his brother, Jack, in which he said, "We love to fish. We love to hunt. We love to fish a little more. ... We are two brothers from the small town of Victoria, Minn., that have always grown up fishing. ... What we decided to do was follow our dreams and desires to become TV show hosts ... and have our own fishing show giving tips and entertainment."

Grizzly Man Outdoors has more than 2,200 subscribers and one of his vlogs, titled "NFL Offensive Lineman falls through the ICE [Dumb Idea]," posted six months ago has more than 32,000 views. Of note to Arkansas fans: "Grizzly vs. Wild Hogs," with 2,400 views, posted in 2017.

Some college athlete YouTubers have had such successful channels that their dealings have run afoul of the current NCAA legislation.

Former University of Central Florida kicker Donald De La Haye's issues with the NCAA and his school created a media storm in the summer of 2017 when he was ruled ineligible by refusing to give in to the NCAA's demand that he stop monetizing his channel, called "Destroying."

At the time of the ruling, the junior kickoff specialist had more than 90,000 subscribers and his videos has tallied nearly five million views.

"I feel like it's about time for things to be changed," De La Haye told SI.com in 2017. "The times these rules were made weren't really up to par with what's going on in the real world today."

Fagg said he thinks legislation regarding the NIL issue will be enacted in the coming months and could possibly go into effect some time in 2021.