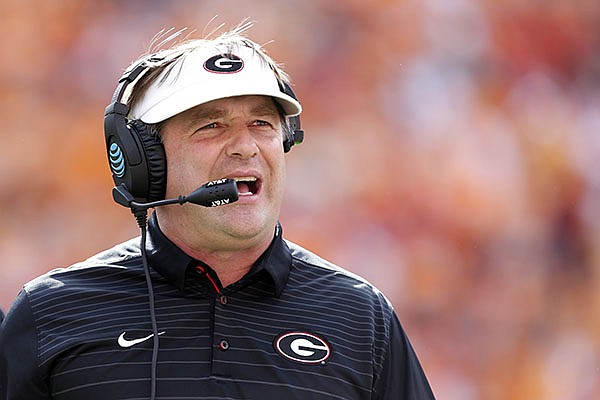 FAYETTEVILLE — Could the Arkansas Razorbacks draw a trip to Gainesville, Fla., that would match up former Florida quarterback Feleipe Franks against his old Gator mates?

Or maybe the Razorbacks could host Georgia on campus for the first time since a wild shootout in the fog early in 2009? That would set up new University of Arkansas Coach Sam Pittman against the program he worked for the previous four years.

Is there any way Arkansas could play Kentucky in back-to-back seasons for the first time in a dozen years?

The SEC's decision to play a 10-game, conference-only schedule for the first time in its history -- to ostensibly minimize risks during the coronavirus pandemic -- means the Hogs will take on two extra opponents from the SEC East to add to previously scheduled games against Tennessee and Missouri.

That means two games -- one home, one away -- against some combination of Florida, Georgia, Kentucky, South Carolina and Vanderbilt.

SEC executive associate commissioner Mark Womack has drawn the task of putting together the 70-game plan that includes 56 previously scheduled matchups that will face some level of rejiggering.

Since the season is now slated to begin Sept. 26, does that mean the Razorbacks will keep their game on that date against Texas A&M, with a probable venue switch from AT&T Stadium in Arlington, Texas, to the Aggies' Kyle Field in College Station, Texas?

It would make sense. But that's not a definite.

There are 10 possible ways for Arkansas to draw its two new opponents, and 20 possible combinations of playing the two games when considering the home-and-away aspect of the additions.

Fans across the SEC already have entered speculation mode, wondering how the decision affects their team's prospects of winning the conference. The five SEC East teams probably would love to draw the Razorbacks, who have lost 19 consecutive SEC games.

Arkansas Athletic Director Hunter Yurachek was asked which two teams he'd like the Razorbacks to pick up.

"You can't put me on the spot like that," Yurachek said, smiling. "I'm going to make an SEC coach or athletic director mad.

"We'll play any of them. You pick the ones you think we should play. We're probably the same."

SEC Commissioner Greg Sankey tried to put a humorous spin on what has been a rugged four-and-a-half months during the virus outbreak when the SEC Network's Paul Finebaum said SEC fans were eager to hear about the new matchups.

"It gives great conversation on afternoon shows for a while, does it not?" Sankey responded.

Arkansas has winning records against just two of their possible added opponents: South Carolina and Vanderbilt.

The Razorbacks are 13-10 all-time against the Gamecocks, whom they have played only as an SEC opponent since joining the league concurrently in 1992. Arkansas went 13-7 in the first 20 meetings as the schools began their existence as cross-divisional annual rivals for 22 consecutive years. South Carolina has won the last three games, including a 48-22 drubbing in Columbia, S.C., on Oct. 7, 2017.

The Razorbacks are 7-3 against Vanderbilt, but some longtime Arkansas fans might say that should be 10-0. The Commodores scratched out a 14-13 victory in Little Rock in 1950 in a weak debut season for Coach Otis Douglas, and a 28-24 win in 2005 in Fayetteville. Vandy's 45-31 win in Fayetteville in 2018 is a low point in Arkansas football history under first-year Coach Chad Morris.

The Razorbacks have never lost to the Commodores in Nashville, Tenn., boasting a 4-0 record there. Arkansas would match up against former Razorback player and assistant coach Tim Horton if they draw the Commodores.

Drawing both Florida and Georgia would seemingly be the worst possible outcome for the Hogs, as the Gators and Bulldogs are projected as the top two teams in the SEC East.

A game against Florida would have its story lines beyond matching Franks against his former team. The Razorbacks' last SEC home victory came in a 31-10 rout of the No. 11 Gators on Nov. 5, 2016. Arkansas is 0-13 in SEC home games since that upset. The Arkansas win in 2016 was its first regular-season win over the Gators.

A return to Athens, Ga., in his first season as a major college head coach would spark all kinds of emotions for Pittman, whose history of developing NFL-ready offensive linemen was cemented with the Bulldogs.

Arkansas has a losing record against Kentucky, which traditionally has been near the bottom of the SEC standings. And yet the Razorbacks led most of the way last season and were driving late in the game before running out of downs in a 24-20 loss in Lexington, Ky. Prior to that, the last game in the series came in a weather-shortened 49-7 rout by the Razorbacks in 2012.

If Womack sticks to the SEC's preset rotation, Arkansas would draw a road matchup at Georgia and would host South Carolina. But Womack does not have to work with the prearranged 2021 and 2022 matchups in mind.

His arrangement does have to win the approval of SEC athletic directors before the schedule is set.

Arkansas will pick up two games in some combination against Florida, Georgia, Kentucky, South Carolina and Vanderbilt on the revised SEC football schedule. Here’s a look at each of those series.