On a mission: Foucha looks to be a leader for teammates and family 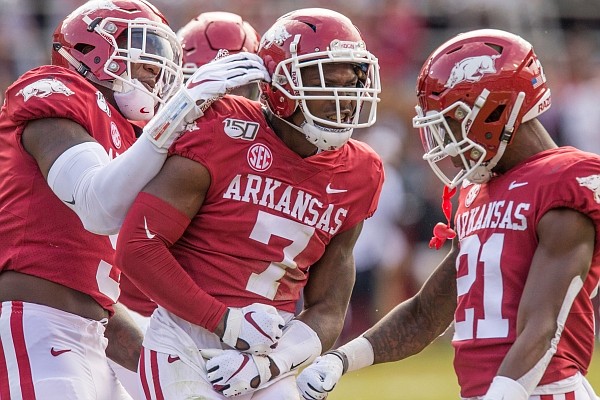 Joe Foucha, Arkansas free safety, and Montaric Brown, Arkansas cornerback, celebrate after Foucha made a stop to force an Auburn turnover in the first quarter on Saturday, Oct. 19, 2019, at Reynolds Razorback Stadium in Fayetteville.

FAYETTEVILLE — Joe Foucha is motivated daily by the thought that he can single-handedly change his family’s life.

In reality, he has already altered his family’s history. Foucha did that as soon as he stepped foot on campus at the University of Arkansas in 2018.

Foucha is not just the first person in his family to play a sport in college, he’s the first to go to college at all. The safety has made it his personal mission to lead by example and illustrate to his nephews, brothers and sisters that they can make something of themselves.

“I want to show them there is a different way,” Foucha said. “There is more to it than New Orleans.”

While Foucha aims to be the role model for those coming up under him, his own greatest personal influence is another product of New Orleans and a name synonymous with electrifying play in the SEC. It is former LSU standout and current Kansas City Chiefs safety Tyrann Mathieu.

The two are from the same area — New Orleans’ 7th Ward — and grew up the same way. Foucha admires the stories, work ethic and track record of a handful of professional football players, but he holds Mathieu in high regard.

“I look up to him because of the way he changed his life and how he keeps this positive energy,” said Foucha, entering his junior season at Arkansas. “He’s showing people that you can win a Super Bowl and live a positive life through football.”

Like many on the Razorbacks’ defense a season ago, he was not satisfied with the unit’s productivity. Arkansas allowed 229.2 passing yards per game in 2019, which ranked 11th in the SEC. And, according to cfbstats.com, opposing quarterbacks collectively posted a 154.9 passer rating against the Razorbacks. That was the highest mark in the league.

Arkansas’ secondary only came away with six interceptions, tied with Vanderbilt for the fewest in the conference. Looking ahead, one of Foucha’s many goals is for him and the rest of the defense to make more impact plays that immediately lead to points or scoring opportunities for offensive coordinator Kendal Briles’ group.

“I want to put my name on the chart (for more) than tackles. Picks, forced fumbles, recovered fumbles, things like that,” he said. “I’m looking to do it all this year to show I’ve improved all around as a safety. I just want to show that I have improved.

“I’m smarter as a football player, my football IQ is better and my covering skills have gotten better.”

He is also eager to find out if the defense can take a step forward under new defensive coordinator Barry Odom, who also works with Arkansas’ safeties. Foucha appreciates Odom’s hands-on style.

“We’re doing everything that Coach Odom tells us to do,” he said. “We’re in the playbook, we’re working out more and we’re learning more. He can grab my attention more. He likes to break it down in different parts, not just one part.

“He explains things to us, goes over it with us, and he teaches the little things first. I feel like what he’s teaching us translates to our defense and as individual football players. I just like him as a coach. I’m excited about him.”

Foucha, who has started 13 consecutive games dating back to his freshman year, finished his sophomore season third on the team in tackles with 87. That is 11 more than safety Kam Curl, who was selected by the Washington Redskins in the 7th round of the 2020 NFL Draft. And he did so battling a faulty shoulder.

Foucha’s shoulder “came out” during spring practices leading into his sophomore year and it proved to be a nuisance throughout the fall, bothering him each game. For a stretch of time, he wore a sleeve that helped in preventing the injury from worsening, but he wasn’t a fan of it.

The sleeve slowed him down, he said. Eventually, Foucha decided to ditch it altogether, take his chances and play without it. In December, he finally underwent surgery and was able to return toward the end of the Razorbacks’ winter conditioning.

As a new season approaches, Foucha is back to full strength. He missed the first full week of voluntary on-campus workouts that began June 8 because he had to quarantine after returning from New Orleans, considered a hot spot for covid-19. Foucha is itching to return to football mode.

“That process was kind of hard for me because that was like my first major injury,” he said. “I’ve got it all taken care of now. It’s not bothering me at all. I haven’t felt this good in my arms and shoulders in a minute — since high school.”

Foucha’s path to making a name for himself at McDonogh 35 in New Orleans is unique. When he arrived at the school, he says he was known as a basketball player above all else. By his freshman year, he had latched onto football for good.

In the ninth grade, Foucha played quarterback. The following year, he transitioned to defensive back and jumped on the radar of recruiters thanks to a talented teammate and even an opposing receiver. Brad Stewart, now at Florida, was in the defensive backfield alongside Foucha. Stewart was the team’s star.

“We played them my sophomore year and my junior year,” he said. “It was that game that a lot of people and coaches used to come to just for those two — Brad and DeVonta. I caught a pick every year we played them.

“That’s how I kind of got my name out there.”

Foucha grew to become a three-star prospect by 247 Sports and Rivals who held offers from Arkansas, Alabama, Auburn, LSU, Tennessee, Texas, Michigan and a host of other top programs. He signed with the Razorbacks in February 2018.

As a whole, the junior feels confident in Arkansas’ crop of safeties following Curl’s departure. He is a fan of the secondary depth provided by young players, and he has already taken a liking to freshman Myles Slusher of Broken Arrow (Okla.).

Jalen Catalon, a former four-star out of Mansfield, Texas, who former Arkansas coach Chad Morris labeled one of the top five high school players he had seen live, figures to play a significant role in the defensive backfield with Foucha. Catalon, who also had shoulder surgery last year, played in only four games in 2019, recording six tackles, a pass breakup and forced fumble.

Following the coronavirus shutdown in March, Catalon was the first name mentioned by Sam Pittman when speaking to reporters about players who had put together productive offseasons.

“I have always carried myself to work hard no matter what the situation is,” Catalon said. “When the new staff came in, it wasn’t going to change how I worked as a man. I always attacked every single thing that I did as if it was going to be the last drill I was going to have to do.

“That’s just how my mind process is. I think what made it even better was just seeing the commitment of the team itself and the leadership we have with the older guys.”

The Razorbacks also return Myles Mason, a junior, and Micahh Smith, a redshirt senior, at safety. They combined for 50 tackles last season. Malik Chavis, a redshirt freshman from Rison, could be in line for more snaps in the secondary after recording two tackles last fall.

Jerry Jacobs, who coaches have listed as a corner on their board for now, could be used all over the back end of the defense, Foucha added. His versatility is a plus.