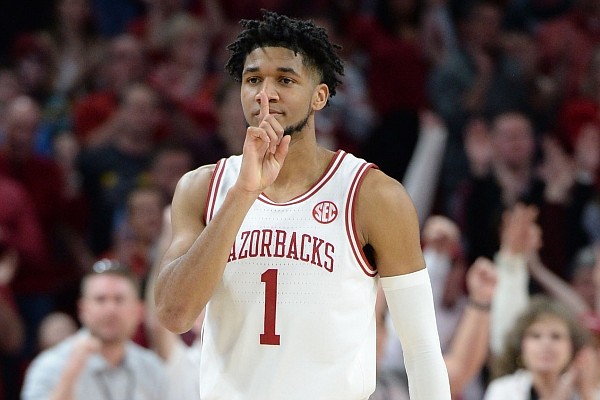 Arkansas guard Isaiah Joe celebrates Friday, Feb. 21, 2020, after hitting a 3-point basket during the second half to seal the Hogs' 78-68 win over Missouri in Bud Walton Arena in Fayetteville.

“That’s the last thing I would ever want to do with a player, to try to recruit him back if he’s trying to pursue an NBA dream,” Musselman said on Monday in a Zoom call with the media. “I want to just provide the pertinent information that’s based on facts from phone calls and people you trust and have long-standing relationships with, and then let the player and the family make the proper decision.”

For Joe, his decision announced Saturday was to withdraw from the NBA Draft for a junior season at Arkansas.

Joe, a 6-5 guard from Fort Smith, informed Musselman of the news when they met last week.

“He was really, really happy,” Joe said in a Zoom call Monday. “He was like, ‘Man, I want to give you a big hug, but we can’t violate the social distance.’

“Everybody seemed happy, and it just made me feel good to be able to say I made my decision and everybody has accepted me with open arms.”

Joe averaged 16.9 points last season and led the SEC with 94 three-point baskets despite missing six games because of a knee injury.

“Now, getting him back, did it feel like we got a star back? Unequivocally, yes,” Musselman said. “There’s no question about that. But I don’t really look at it from a quote-unquote recruiting standpoint, because I don’t believe in trying to recruit somebody away from what they really want to do.

“I know right now Isaiah wants to play in the NBA. He’s part of the Arkansas Razorbacks right now, but he has a goal and a dream to play in the NBA. So we want to try to help him in practice, behind closed doors to work on skill development to put himself in the best position to be as high of a draft pick as he possibly can a year from now.”

Joe hadn’t been projected as a first-round pick, but he was among 60 players invited to the NBA scouting combine.

“It was definitely a huge honor to get that invitation,” Joe said. “Not too many people get the opportunity to experience getting an invitation, so it definitely made the decision a little bit tougher knowing that I was amongst the guys they feel are ready for the next level.”

Joe said he didn’t want to get into the details about how close he came to staying in the draft.

“But after weighing the options, the pros and cons of staying and the pros and cons of going, we had a big sit-down with my family and we talked for about three hours trying to get a feel for what we can do,” Joe said. “As far as whether I stayed or went, the decision would have been good either way.”

Musselman said he could sense the difficulty of the decision for Joe. He didn’t know before their meeting what Joe would tell him.

“When we had our conversation, I actually was surprised,” Musselman said. “I think that he went through a period where … maybe it seemed like he was going to come back.

“Then I think that there became more interest, more interviews [with NBA teams]. Then maybe he was leaning towards taking the NBA route. Then at the very end, he came back around to thinking that this was going to be the best decision for him.

“When he told me, I asked him two or three times, ‘Are you sure? Is this really what you want to do? Are you excited about it?’ And he was excited. He had zero reservation in his voice when we discussed it.”

Musselman was an NBA head coach with the Golden State Warriors and Sacramento Kings, and an assistant coach with the Minnesota Timberwolves, Orlando Magic, Atlanta Hawks and Memphis Grizzlies.

“I think the bottom line is I’ve been in the NBA, I know how great it is, I know how great the lifestyle is, I know the level of play,” Musselman said. “That’s the dream of any basketball player, so as a coach or a coaching staff or administration, you want to do everything you possibly can to help that player reach his goal as quickly as he can, but also to put himself in a position where he can have a career at that level.

“You discuss pros and cons, and if asked, you give an opinion on what might be best. I think it varies from player to player and family to family on how involved a coach at the collegiate level will be in this.

“Isaiah and Derrick, his father, were very thorough throughout the process. They took their time, which they certainly should, because it’s a monumental decision.”

The Arkansas staff has significant NBA experience in addition to Musselman.

Assistant coach David Patrick, who was hired a month ago, was a scout for the Houston Rockets. Earl Boykins, the director of student-athlete development, played 13 seasons in the NBA.

“They have a lot of information and things that I can use for my game to help me get to that next level,” Joe said of the staff’s NBA background. “I felt like staying is almost like being in the league, and that it’s a great training ground with the knowledge that they have.”

“I think the biggest thing people want to see is for me to get bigger and bulk up and get stronger,” he said. “I’ve been gaining weight consistently over the past couple of years. I really see I’m going to continue to do that.

Joe set an Arkansas record by hitting 113 of 273 three-pointers (41.3%) as a freshman, when the Razorbacks had 6-11 Daniel Gafford as a strong presence inside.

Last season with Gafford having moved onto the NBA as a second-round pick of the Bulls and 6-6 Adrio Bailey usually Arkansas’ tallest starter, Joe hit 94 of 275 three-pointers (34.2%).

“I feel like my main thing is to be the best shooter on the court at all times,” Joe said of raising his draft stock. “Make sure that I can knock down shots at a consistent clip.

“At the end of the day, when I go to the next level, they’re going to want me to knock down the shot really consistently.”

Because of the pandemic, Joe’s contact with NBA teams was limited to Zoom calls.

He went through a summer practice with the Razorbacks on Monday for the first time. He sat out the previous two weeks while considering whether to stay in the draft.

“We’re a brotherhood,” Joe said. “Everybody’s really excited that I’m back. Now is the time to put it out on the court and have that good chemistry.”