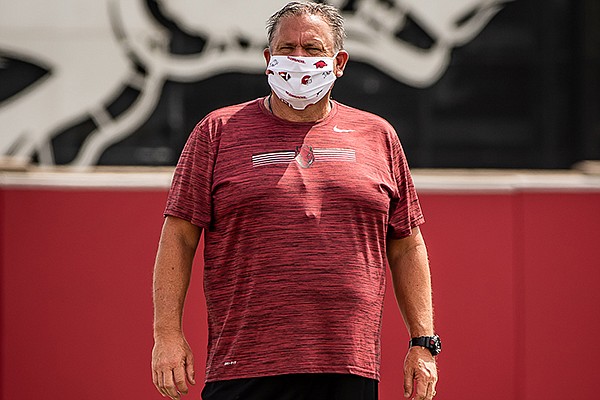 On Tuesday the conference announced its teams will not begin practicing until Aug. 17. The season of conference-only games is set to begin Sept. 26.

Teams will be permitted a total of 25 practices capped at 20 hours per week until the first scheduled game. Teams will not be able to wear full pads until the fifth day of practice, which will follow two days in only helmets and two days in shells.

Athletes will be required two off days each week by the conference, one more day than the NCAA requirement.

Arkansas was scheduled to begin its preseason practice Friday. That date was based on the NCAA's allowed start time 29 days before the season opener.

The Razorbacks have since canceled schedule nonconference games against Nevada on Sept. 5, Notre Dame on Sept. 12, Charleston Southern on Oct. 3 and Louisiana-Monroe on Nov. 21. A modified schedule has not yet been released.

Beginning Friday, teams will be allowed to conduct up to 14 hours of strength and condition, meetings and walkthroughs per week through the scheduled start of practice.

Since July 24 players have been permitted to participate in up to 20 hours of those activities each week.