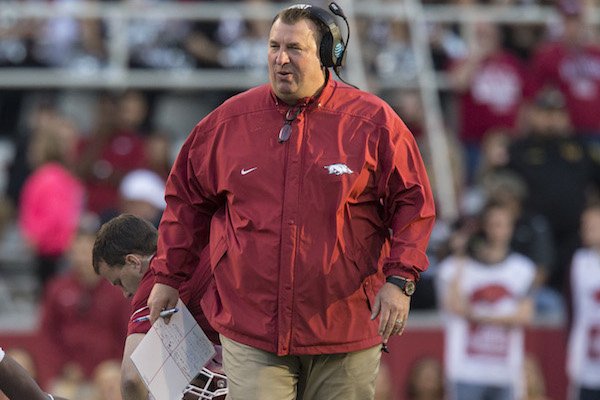 Arkansas coach Bret Bielema on the sideline in his final game, a 48-45 loss to Missouri Friday, Nov. 24, 2017, at Reynolds Razorback Stadium in Fayetteville.

FAYETTEVILLE — The Razorback Foundation and representatives for former University of Arkansas football coach Bret Bielema did not negotiate governing law language located in Bielema’s 2018 buyout settlement with the foundation, according to court filings this week.

That language is at the heart of a disagreement between the two sides concerning which court should hear a lawsuit Bielema filed against the foundation in June. Bielema is demanding to be paid more than $7 million in compensatory damages, claiming the foundation was wrong when it stopped making buyout payments to him in January of last year, 23 months before payments were contractually set to end.

Attorneys for Bielema filed the lawsuit in the U.S. Western District of Arkansas, but the foundation has asked the court to dismiss the suit. The foundation claims any disagreements relating to Bielema’s buyout settlement were meant to be heard in Washington County Circuit Court, not the federal court with an office in the county.

Past coverage in Bielema's lawsuit against the Razorback Foundation

The foundation requested Wednesday to supplement its motion for dismissal of the case with background information on its January 2018 settlement with Bielema. The foundation said the supplemental information is necessary after Bielema’s attorneys filed a brief previously that requested U.S. district judge P.K. Holmes III keep the suit in his court.

The foundation’s new filing includes an affidavit from foundation Executive Director Scott Varady, which states neither of Bielema’s representatives — agent Neil Cornrich or attorney Jonathan Hurst — discussed or objected to controlling law or venue provisions that were included in the settlement’s first draft that was written shortly after Bielema was fired in November 2017. According to Varady, the sides also never discussed diversity jurisdiction that allows federal court to hear disagreements between parties of opposite states.

In past filings, Bielema attorney Thomas Mars writes the ability to bring suit in either state or federal court was “material” to Bielema agreeing to the settlement.

“Notably, though, the complaint claims only that [Bielema] was aware that the venue clause would allow him to litigate in state or federal court, not that venue was a negotiated term,” foundation attorney Marshall Ney writes in his latest filing. “In his brief, he now suggests that the venue provision was negotiated. But this argument is unsupported and lacks credibility.”

In Bielema’s negotiated settlement with the foundation, a governing law section states the settlement will be governed by Arkansas state laws and “Washington County, Arkansas, shall be the exclusive venue for any action arising under or relating to this Agreement.”

That language differs from Bielema’s 2015 personal services and guaranty agreement with the foundation, which stated, “venue for this Agreement shall lie solely with the Circuit Court of Washington County, Arkansas.”

Asked in an email Friday why the governing law language omitted the direct reference to the circuit court in 2018, Ney wrote: “Our pleadings set for the Razorback Foundation’s position on the venue issue are before the Court and we have nothing to add at this point.”

“The Razorback Foundation intended for Washington County Circuit Court to be the exclusive venue for any legal disputes consistent with previous guaranty agreements between the parties,” Varady said in his affidavit, “and Bret Bielema’s representatives did not express any views to the contrary.”

“The foundation has not found a case that lines up more squarely than the Northport case,” Ney writes in the foundation’s latest filing. “Bielema fails to show that the Court’s holding there does not dictate dismissal in this case.”

Mars has referenced the Northport case in multiple filings on behalf of Bielema, arguing Holmes’ decision in that case centered around more ambiguous language than what is found in Bielema’s settlement with the foundation.