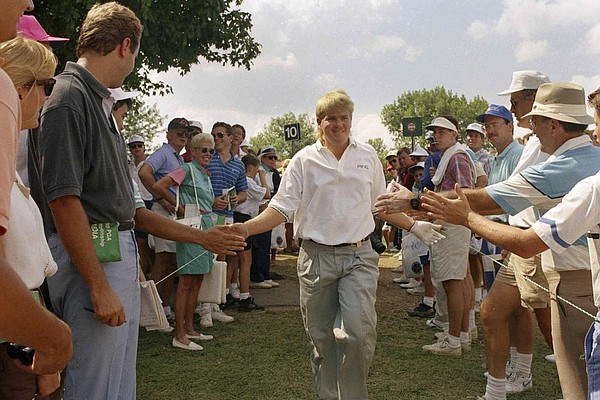 Former Arkansas Razorback John Daly is greeted by spectators during the final round of the 73rd PGA Championship in 1991. Daly went from being the ninth alternate to champion as he watched his popularity soar over the course of the weekend. (AP file photo)

FAYETTEVILLE -- A phenomenon was born this week 29 years ago.

John Daly's grip it and rip it mentality took over the golf world and enthralled a nation as the former Arkansas Razorback came out of nowhere to imprint his name, his style and his brand on history.

On Aug. 11, 1991, Daly won the 73rd PGA Championship, and the hearts of dreamers and even some of the game's greatest names at Crooked Stick Golf Club in Carmel, Ind., in suburban Indianapolis.

The ninth alternate for the field entering the week, Daly kept a close eye on those dropping out of the tournament. By Wednesday afternoon, he was the second or third alternate and decided to drive on up in case he made the field.

The decision was brilliant.

When Daly checked into his hotel around 2 a.m. on Thursday, the day the tournament was to start, he had a message saying he was in after Nick Price's wife went into labor and he withdrew.

"That week was such a blur," Daly said on a video produced by CBS. "I didn't get a practice round in, of course."

Daly shot a 69 in the opening round to tie for eighth place with five other golfers, including two-time PGA champ Raymond Floyd, two strokes behind Ian Woosnam and Kenny Knox.

Already fans and commentators were taking notice of Daly's prodigious tee shots that were taking out so many of the most dangerous obstacles.

"Thursday there were a few people," Daly said on the video. "Not many. But it got a little bigger Friday. Saturday it got really big."

Daly shot 5-under 67 on Friday to take sole possession of first place, one shot ahead of Bruce Lietzke, two up on Knox, and three strokes clear of Woosnam, Nick Faldo and Craig Stadler. He was three shots up on Knox and Stadler after a third-round 69.

"He was just ripping it over everything," said Ian Baker-Finch, the former pro who was serving on the broadcast team, on the PGA clip.

"That golf course just suited my style of play," Daly said. "I was just flying all the trouble, and the fairways are just wide open after that."

On Saturday, Daly was invited to an Indianapolis Colts home exhibition game by then-Colts owner Robert Irsay. He was introduced to the crowd during a break in the game.

"I had no idea they were going to introduce me on the 50-yard line," Daly said on the CBS production. "I felt like I had already won the tournament. People went nuts.

Daly went to his locker on Sunday to prepare for his warmup and found dozens of notes taped on it, including one he's hung on to as a cherished memento. Jack Nicklaus had written a brief message: "Go get 'em."

Said Daly to CBS, "I've still got that framed at my house. That was pretty cool."

Daly kept his cool on Sunday, even while shooting his worst score of the week. His 1-under 71 gave him four rounds under par, a 12-under total, and made him a three-shot winner over Lietzke for his first major.

Daly's signature blond hair with the tail at the back and his solid mustache made him instantly recognizable. The sound of his ball striking and his soaring length off the tee lent itself to the nickname "Long John," and made his peers and media members take notice.

"It was the start of golf as we know it now, John Daly at that PGA Championship in 1991," Baker-Finch said on CBS. "Just grip it and rip it."

The venerable Jim Nantz summarized the event like this: "It was truly one of the most amazing come out of nowhere stories in the history of not only the PGA Championship, but in the game of golf.

"To get out of his car and shoot 3 under that first day, that got everyone's attention."

The victory in the PGA helped him earn PGA Tour rookie of the year honors in 1991, and he also pulled down the PGA Tour comeback player of the year recognition in 2004.

His loyalty and support of the Razorbacks has carried on for the decades since he played at Arkansas between 1984-87, which included his qualifying for the 1986 U.S. Open.

"I've talked with him on the phone a few times," said Arkansas senior William Buhl, who is competing in the U.S. Amateur this week at Bandon Dunes Golf Resort in Bandon, Ore. "I know this: He loves this program, and I know he loves having the title of Arkansas Razorbacks on his bag, playing golf here, being a major winner.

"And I know this: He'll do anything for this school or anything for the golf program if he needs to. We've got great support from basically all across the world."

Arkansas junior Julian Perico, also playing in the U.S. Amateur, has built an even closer relationship with the legend.

"I call him 'uncle,' and he calls me 'son,' " Perico said. "I guess we're pretty close. He's a great guy, honestly. He's a big supporter and a great Razorback fan. It's always nice to just talk to him, talk golf to him. He tells me stories and he's kind of hilarious.

"He's a great guy, dude. Everybody hears stories from him and like makes assumptions. He's honestly one of the nicest guys in the world. Like he would do anything for anyone."