Big 12 moves ahead with fall sports beginning in September 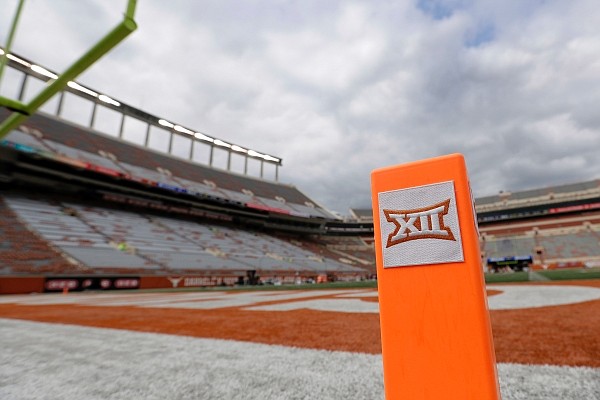 A Big 12 pylon marks the end zone at Darrell K Royal Texas Memorial Stadium before an NCAA college football game between Texas and Kansas State in Austin, Texas. Big 12 schools have agreed to play one nonconference football game this year to go along with their nine league contests as plans for the pandemic-altered season continued to fall into place. (AP Photo/Eric Gay, File)

The Big 12 Conference reaffirmed its decision to press on with college football and other fall sports Wednesday, joining the Atlantic Coast and Southeastern conferences in taking the field amid the coronavirus pandemic.

The move came one day after the Big Ten and Pac-12 announced they would not be participating this fall. There is a chance those two Power Five leagues will push their seasons to the spring, but that remains to be determined.

In the meantime, the Big 12 board of directors approved a plan to begin fall sports after Sept. 1 with football playing a schedule in which each team can play one non-conference game before league play begins Sept. 26. The schools will all play each other to give them 10 total games with the Big 12 title game scheduled for Dec. 12.

"If anybody is around that tells you they can accurately forecast what's going to happen with the virus, they're delusional. Even the best scientific minds are unable to forecast with precision," Big 12 Commissioner Bob Bowlsby said. "But generally speaking we've been able to make progress, provide information and I feel very good about where we are."

The decision was made following discussions with infectious disease experts, scientists and physicians along with the input of athletic administrators, coaches and athletes. It culminated with a two-hour call Tuesday in which the board of directors agreed it was safe to move forward.

"Our student-athletes want to compete, and it is the board's collective opinion that sports can be conducted safely and in concert with the best interests of their well-being," said TCU Chancellor Victor Boschini, chairman of the Big 12's board of directors. "If at any point our scientists and doctors conclude that our institutions cannot provide a safe and appropriate environment for our participants, we will change course."

All athletes will be subject to three tests per week — likely Sunday, Wednesday and Friday — in "high contact" sports such as football, volleyball and soccer. Should an athlete test positive, they would be subject to echocardiograms, a cardiac MRI, blood tests and other examinations before they are cleared to return.

All non-conference opponents must adhere to Big 12 standards in the week leading up to any competition.

Bowlsby said he wanted to wait until August to reach a decision on fall sports to see what would happen as teams begin preseason camp. And while there were numerous outbreaks when athletes returned to campus in June for workouts, the commissioner said most of the league's 10 schools have not reported any positive tests for several weeks.

"Frankly, we found that what we thought was golden 60 days ago is garbage today. It's an ever-evolving environment," Bowlsby said, "and we will find ourselves with bump spots during the fall. There isn't any doubt about that. But I think we are very well-prepared to deal with those things."

That doesn't mean there aren't still more questions than answers.

With the Big Ten and Pac-12 joining numerous smaller conferences in moving to the spring, what does that mean for crowning a national champion? Does a school that experiences an outbreak during the week forfeit their game, and what are the chances that coaches could game the system based on who tests positive? Is there a number of positive tests league-wide that ultimately would force the Big 12 to call off the season?

Bowlsby acknowledged that most of those questions do not have answers, at least at this point, but he also admitted that it would be difficult for the Big 12 to continue with fall sports if the ACC and SEC ultimately decide to move to the spring.

The commissioner also hopes to have clarification soon from the NCAA on such issues as eligibility and financial aid.

"Any time anybody at any level has decided they weren't going to play or they were going to do something different, it affects us," Bowlsby said. "I don't know we would want to be the only college football conference playing. To the questions about the postseason — that would pretty much eliminate the postseason."

The decision to move forward this fall was met with overwhelming approval from coaches and athletes, many of whom simply wanted clarity as they pressed on with daily workouts in anticipation of a season.

"They want to compete," Kansas State coach Chris Klieman said. "Especially seniors, they only have so many opportunities to compete. It's pretty special when you go into your senior years. Those are the guys I'm really hopeful have a chance."

Whether they compete in front of fans is a question that the Big 12 is leaving to local jurisdictions. Each state has put its own limits on crowd sizes, some of them barring any large gatherings altogether, and schools will be forced to adjust their ticketing plans to adhere to the recommendations of public health officials.

"What we've heard from our experts are some of the ramifications of the virus can be mitigated and properly managed and as long as that continues to be the case, they believe we can safely conduct competition," Bowlsby said. "If we get to the point where its their considered opinion we can no longer do that, we can pivot very quickly to another course."