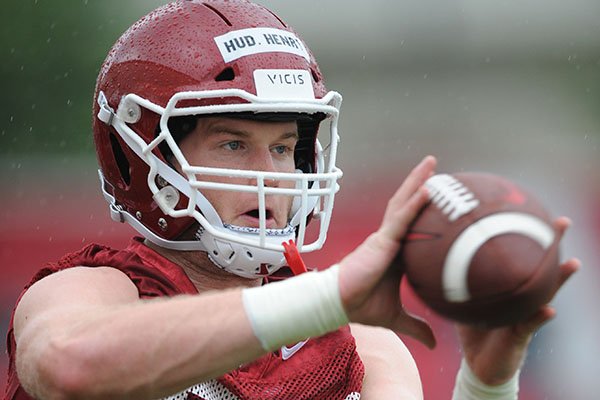 As a high school standout at Pulaski Academy in Little Rock, Henry was part of two state championship teams and had an overall record of 53-3. Most PA games were laughers by halftime and included a running clock in the third and fourth quarters.

Coming from that background, a 2-10 record and zero conference wins by the Razorbacks last year was a shock to the system.

“It’s definitely weird going from winning a championship almost every year to just really playing bad and losing games,” Henry said. “That was a horrible feeling.

“I was just learning perseverance. It was about getting punched in the mouth and getting back up every single time, just never giving up. That’s something I never really learned at PA because we won a lot.”

In addition to losing, Henry’s position looked different last year. In high school, he was basically a tight end in name only. At 6-5, 225 pounds he looked more like a receiver and lined up like a receiver, too.

At Arkansas, he was asked to bulk up and learn to become a better all-around tight end.

“I wasn’t as big as I wanted to be,” Henry said. “I really learned a lot last year about how blocking is very important at our position. So that’s something I’ve really been working on in the offseason, getting my lower body bigger, and doing the little things right — having my steps right, having my hand placement, my hat placement. I think last year for me was a big punch in the face sometimes going against big guys, but that’s something I’m trying to work on because it was something I was bad at last year, if I’m being honest.”

The learning curve, coupled with missing some of the preseason while in concussion protocol, kept Henry out of the lineup for much longer than was projected for a player who was rated by some as the nation’s best tight end in his high school class. Henry didn’t play in a game until November, and preserved a year of eligibility by playing just three games overall.

Henry played 18 snaps against both Mississippi State and LSU, and 16 snaps against Missouri. He caught two passes for 17 yards during a touchdown drive late in the blowout loss at LSU.

“It was really weird walking out in Death Valley and stepping out on the field, it was one of the strangest feelings I’ve ever had,” Henry said. “I grew up watching Joe Adams and Ryan Mallett and Tyler Wilson and all those guys playing at Death Valley. You walk out there and look across and there’s a dude wearing an LSU jersey, and the atmosphere and you’re like, ‘Man, this is awesome.’

“That drive we had was a really big confidence booster for me. The main thing was finally catching the ball. That was a great feeling. That drive was really good for me because I had a hard freshman year. It gave me a lot of confidence in myself and let me know I can do this. It’s just playing ball.”

“He’s a good player. He’s just young and understanding that you can do this — you can block those guys, you can run routes against man coverage or win on a linebacker, or whatever,” Craddock said last October.

Now Henry is being looked to as a leader in the Razorbacks’ most inexperienced position group. Arkansas lost senior scholarship tight ends C.J. O’Grady, Chase Harrell and Hayden Johnson from last season’s roster, and Grayson Gunter transferred to Southern Miss.

Henry was one four tight ends on campus this summer, along with fifth-year senior Blake Kern, true freshman Blayne Toll and Nathan Bax, a second-year walk-on.

Kern was put on scholarship last year. Toll was recruited as a defensive end and has since moved back to that position.

“We have a lot of smart guys and a lot of guys doing the right things,” Henry said. “We’re all getting the material down. We’ve been working hard in the weight room and we’ve been really grinding. I’m just really pumped with the guys we’ve got.”

Henry said the group has been focusing on “little things,” such as technique, steps and playing the game intelligently.

“We’re a team on a mission,” he said. “Last season was not the kind of season we wanted to have.”

Jon Cooper, a 33-year-old who spent the past two seasons at Central Florida, is Arkansas’ new tight ends coach. Cooper was a four-year lineman in the NFL.

“It’s good to have his mentality and learn from him,” Henry said. “He has a lot of good football knowledge, so that’s something I’m really excited about, to get on the field with him and learn.”

In February, Cooper said he liked what we saw from Henry in the weight room and on game film.

“As a freshman, he got a chance to get on the field and get some experience that is completely invaluable,” Cooper said. “That’s game speed. You can say you practice at game speed, but nobody can really simulate that.

“He comes from a great family and has been well-coached and I am excited to get the chance to work with him.”

During the covid-19 quarantine, Henry worked out daily with his brother, Hayden, a senior linebacker for the Razorbacks. They also worked out with Arkansas walk-on receiver John David White, who also played at Pulaski Academy.

“(Coaches) would send us workouts and we would do their workouts, but we would also CrossFit workouts and do a lot of running in the morning,” Hudson Henry said. “It was a lot of high intensity, trying to get our stamina up. We did strength stuff with what we have: a couple of dumbbells, a barbell, a couple of plates. We just did what we could with it and improvised like a lot of people.”

Henry said he reported to Fayetteville on June 8 at a weight of 250 pounds, about 13 pounds heavier than he played at last season.

“It’s a slow process because you don’t want to put on bad weight,” he said. “Over the winter break I went home and my mom usually cooks pretty healthy. It was just a slow gain, just gain a lot of muscle and not gain a lot of fat. I feel pretty good at this weight, pretty quick and pretty fast. You don’t want to be too big and not be able to move. Being quick and being fast is really special in college football if you’re a big guy.”

Shortly before he came back to campus, Henry had the chance to spend some time with his oldest brother, Los Angeles Chargers tight end Hunter Henry, a former All-American and Mackey Award winner at Arkansas.

“He’s taught me a lot,” Hudson Henry said. “I got a chance to just sit down and talk with him about different schemes of offense. I’ve tried to learn blocking from him because he’s been really successful at it. Something he’s really taught me that has been my motto my whole life has been just to stick it in there and play through the whistle, play hard.”

The Henry brothers FaceTime sometimes, which allows Hudson an open line to get tips and pointers from one of the best players at his position.

“How can I elevate my game to the point that I’m rising above the crowd?” Hudson Henry said. “It’s special to have that and I’m really lucky to have that.”