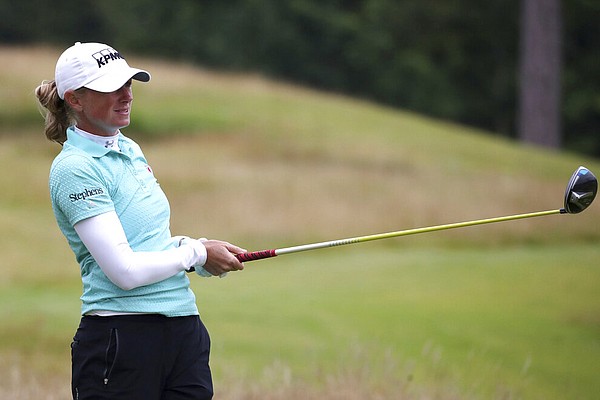 NORTH BERWICK, Scotland -- Former University of Arkansas golfer Stacy Lewis won the Ladies Scottish Open with a 23-foot birdie putt on the first hole of a playoff Sunday, giving the American her first title in nearly three years and a confidence boost ahead of the Women's British Open.

The 35-year-old Lewis took a swig of champagne beside the 18th green after fending off Azahara Munoz, Cheyenne Knight and Emily Kristine Pedersen for her 13th LPGA Tour victory -- and first since the birth of her daughter Chesnee in October 2018.

"I have been trying to get a trophy from the day she was born. That's been my goal," Lewis said.

"I just called them, got to FaceTime with them. My husband said she was hitting the TV screen with her plastic golf clubs when I made that putt. So it's just pretty cool. I can't wait to get home with them in a week or so and celebrate."

"On this golf course, you're going to hit good shots and they are just not going to end up where you want them to. That's links golf. That's this type of golf," Lewis said. "The patience was tested today. There were moments there on the back nine where I wanted to go at pins but knew I couldn't. So I really just tried to wait for my opportunity and just kept hanging in there."

After Lewis holed her birdie putt in the playoff, Knight missed a 10-foot birdie try.

"I'm really happy the way I hung in there today. The conditions were really tough," Knight said. "It's all a learning experience. I kind of struggled starting the restart, so I feel really good about my game."

Lewis will look to follow up at Royal Troon later this week, when the first women's major of a reshaped golf year takes place. She is a two-time major winner, triumphing at the Women's British Open in 2013.

"I was just very much in control, and then hit a bad shot on 11 and it leads to double, and then really hit some good shots after that," Lewis said. "Made the birdie on 14. Fifteen was a mess. Sixteen, I should have gotten up-and-down. Seventeen, I probably should have made that putt.

"It was frustrating that I had my chances, but at the same time with all the stuff that went on there in that back nine, I still had a chance to win the golf tournament. So I stayed very positive throughout the day, and just proud of the way I hung in there."

Danielle Kang, coming off consecutive victories in Ohio in the LPGA Tour's return, was a stroke back after a 69. Nanna Koerstz Madsen also was 4 under after a 65.