Junior College U: UA hoops has thrived with JUCO players 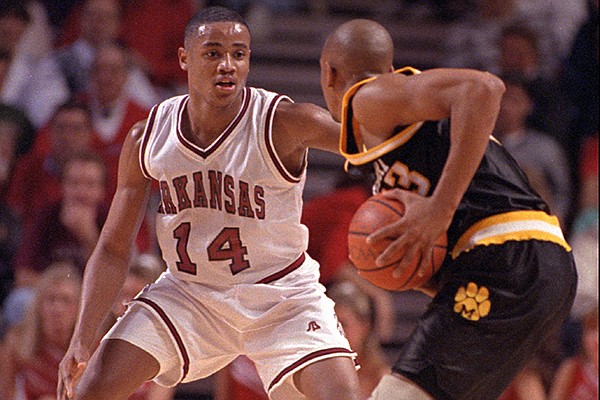 Arkansas guard Corey Beck (14) defends an unidentified Missouri player during a game Thursday, Dec. 2, 1993, in Fayetteville. The Razorbacks defeated the Tigers 120-68 in the dedication game at Bud Walton Arena.

FAYETTEVILLE – Going back 50 years to Almer Lee, the University of Arkansas basketball program has a rich history of excellence with junior-college players.

Mason Jones, The Associated Press co-SEC player of the year and an honorable mention All-American last season, became the most recent junior-college transfer to find stardom with the Razorbacks.

Last season, Jones — a 6-5 guard who played two seasons at Arkansas after transferring from Connors (Okla.) State Community College — averaged 22.0 points to become the first Razorback to lead the SEC in scoring. He scored 30 or more points nine times, including a career-high 41 against Tulsa and 40 against Auburn. He also led Arkansas by averaging 5.5 rebounds, 3.4 assists and 1.6 steals.

Other junior-college transfers to receive All-American honors with the Razorbacks include Martin Terry (1973) from Hutchinson (Kan).; Ron Brewer (1977 and 1978) from Westark in Fort Smith; Darrell Walker (1983) from Westark; and Alvin Robertson (1984) from Crowder (Mo.).

Here is a list of the top 15 junior-college transfers to play for the University of Arkansas (years played at UA in parentheses) as voted on for an Arkansas Democrat-Gazette poll. Voters included Arkansas media and former UA staff members.

Lee, a Fort Smith native who transferred to Arkansas from Phillips County Junior College in Helena, became the Razorbacks’ first Black letterman in basketball when he was the Southwest Conference newcomer of the year in 1970.

Lenzie Howell, a 6-4 forward from San Jacinto (Texas), was the 1990 NCAA Midwest Regional MVP for Arkansas and helped lead the Razorbacks to the Final Four. He also was the 1989 SWC Tournament MVP.

Little Rock native Daryl Macon from Holmes (Miss.) and Jaylen Barford from Motlow (Tenn.) State both became 1,000-point scorers for the Razorbacks on senior night in a victory over Auburn, and they helped Arkansas make NCAA Tournaments in 2017 and 2018.

Brewer, Beck, Robertson, Terry and Walker are on the first team. The second team has Barford, Howell, Jones, Macon and Jannero Pargo. Davis, Lee, Stewart, Alex Dillard and Sonny Weems are on the third team.

Pat Foster, who became coach at Lamar, Houston and Nevada, was an Arkansas assistant coach when Terry and Brewer played for the Razorbacks.

“I don’t think there’s another program in the country that’s had as many great players from junior colleges as Arkansas,” Foster said. “It’s an unbelievable list.”

Junior-college coaches also have had a major impact on the Razorbacks.

Nolan Richardson and Eddie Sutton — Arkansas coaches elected to the Naismith Memorial Basketball Hall of Fame — got their starts in college at the juco level. Richardson also was a junior-college player at Eastern New Mexico.

Gene Keady, who won five Big Ten championships as Purdue’s coach, came from Hutchinson (Kan.) to be an Arkansas assistant for Sutton.

St. John’s Coach Mike Anderson, who was Richardson’s assistant at Arkansas for 17 seasons and later the Razorbacks’ coach for eight seasons, was a junior-college player at Jefferson State in his hometown of Birmingham, Ala.

Of the 22 combined NCAA Tournament teams in 25 seasons at Arkansas when Sutton and Richardson were the coaches, 14 had at least one starter who was a junior-college transfer.

“Coach Sutton and Coach Richardson knew from being juco coaches that there were some very good players in junior college,” Walker said. “They had the connections to find the guys that could help them win.”

When Richardson became the coach at Tulsa for the 1980-81 season, he had a starting lineup of all junior-college players — including Anderson at point guard — that beat Syracuse to win the NIT championship.

“Tulsa hadn’t won anything in forever, and we won with an all junior-college starting lineup,” Richardson said. “I saw the difference between a junior-college and high school player. The maturity and how quickly a junior-college player would develop going against great competition.

“There’s no question to me that you’re better having some junior-college players in your program.”

The Razorbacks were coming off a 16-16 season when Barford and Macon joined the program and helped Arkansas go 26-10 and 23-12.

“I remember after Jaylen and Daryl had both committed, I was at the Junior College Jamboree in Dallas,” said Matt Zimmerman, an Arkansas assistant coach at the time who is now the radio color analyst for the Razorbacks. “All the coaches came up and said, ‘You guys got the two best junior-college players in the country.’

“That was pretty nice to hear that, to know we had two men coming. Jaylen and Daryl were guys that could make you a lot better instantly.”

Lee helped pave the way for Black players to come to Arkansas after he averaged 17.3 points as a sophomore. He averaged 19.1 points as a junior and was named second-team All-SWC.

A knee injury limited Lee to five games as a senior, but that didn’t diminish his influence on the program.

“Almer was the big reason I went to Arkansas,” Brewer, part of the famed “Triplets” along with Sidney Moncrief and Marvin Delph who led the Razorbacks to the 1978 Final Four, said in 2016. “Arkansas wasn’t my first choice coming out of high school, but I looked up to Almer and I listened when he told me, ‘Arkansas is where you need to be because things are changing for the better.’

“I can say that over the years, a lot of the great players at Arkansas being of color were there because of Almer, what he did or said to them directly. We all either knew about Almer or had been mentored by him or had conversations with him.”

Terry, who played for Keady in junior college, averaged 26.3 points in two seasons at Arkansas, including 28.3 as a senior when he led the Razorbacks to a 16-10 record under coach Lanny Van Eman.

“Martin Terry is a forgotten Razorback,” Walker said. “He’s a great player that a lot of people don’t remember or don’t know about. We don’t talk enough about a guy who averaged nearly 30 points a game.”

Terry scored 30 or more points in 18 of 52 games for the Razorbacks, including 47 against SMU, 46 against Texas A&M, 43 against Memphis and 40 against Southern Illinois.

When Terry was contacted by a reporter for the Arkansas Democrat in 1983 for a story on his career 10 years after he played for the Razorbacks, he seemed pleasantly surprised.

“True fans will remember when I played,” Terry said at the time. “But I thought I was a has been. Gone on.”

“He wasn’t a long-range shooter like Marvin Delph or [Arkansas junior] Isaiah Joe. That wasn’t his game. He would put the ball on the floor and get to a spot, and he was automatic.”

Bobby Vint, a former Arkansas player and an assistant coach when Terry played, said Terry played a role in the Razorbacks’ success under Sutton.

“Martin generated a lot of excitement for Arkansas basketball,” Vint told the Democrat in 1983. “And that helped lead to a commitment by coach [Frank] Broyles and the hiring of coach Sutton.”

Brewer averaged a team-high 18.8 points as a senior and 15.8 points in three seasons.

“As good as Sidney and Marvin were, Ron was the most talented player we had on that team,” Foster said. “Ron had the edge on everybody else.”

Walker and Robertson were at the their best on defense. Opposing guards sometimes struggled just to get the ball past the half-court line . Walker averaged 2.6 steals and Robertson 2.5. Both got a lot of dunks off turnovers.

“There were a lot of guards we terrorized,” Walker said with a laugh.

Beck averaged 7.9 points and 4.7 assists in three seasons at Arkansas.

“For me, Corey’s biggest asset was his leadership,” Walker said. “He was tough, he was hard-nosed, but more than anything he was a big-time leader. I would take a Corey Beck on my team any time.”

Dillard, from Southern Union (Ala.), averaged 7.8 points in 12.5 minutes off the bench in two seasons and hit 138 of 344 three-pointers. He scored 39 points against Delaware State.

Stewart averaged 7.4 points and 4.5 rebounds in three seasons. Weems, from West Memphis and UA-Fort Smith, averaged 15.0 points as a senior and 13.4 points in two seasons.

An Arkansas junior-college transfer not to make the top 15 was Manuel Whitley, a Bismarck native who averaged 17.0 points as a senior during the 1955-56 season after serving in the Army and playing at Little Rock Junior College, which is now UALR.

Nine junior-college players scored 30 or more points in 40 games for the Razorbacks, including Tim Scott’s 34 against Kansas and Danny Manning during the 1986-87 season.

The Razorbacks don’t have a junior-college player on their current roster after Jones’ decision to enter the NBA Draft and bypass his senior season. But Akol Mawein, a 6-10 forward from Navarro (Texas) Community College who played at Southwest Christian Academy in Little Rock, has committed to the Razorbacks and Coach Eric Musselman for the Class of 2021.

In Musselman’s two seasons at Arkansas, he has added five graduate transfers.

“I loved recruiting junior-college players,” Zimmerman said. “They’re a little bit like what Coach Musselman is getting with senior grad transfers. I think you can coach them really hard and aggressive, because they’ve got nowhere else to go. This is it for them.

“Juco guys are the same way. They come to you, and now they’ve got to perform. They don’t have any other options.”

“In junior college, they’ve been riding in the vans on long trips, and they’re eating sandwiches, and they don’t live in places as nice as Division I players,” Zimmerman said. “So they’ve come from a little bit tougher environment, and they’ve had to grow from those life experiences.”

CORRECTION: Phillips County Community College was incorrectly identified as being in Hot Springs. It has been corrected to say the college is in Helena.