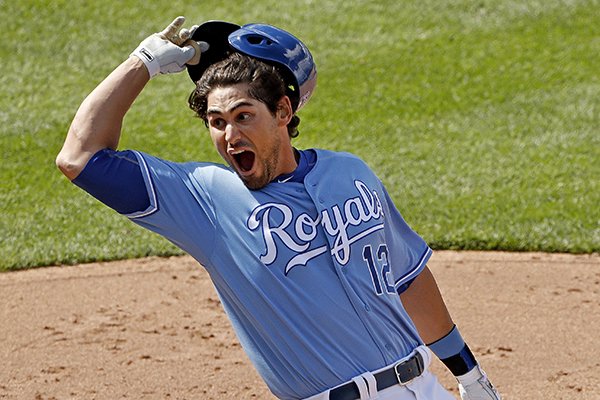 Kansas City Royals' Brett Eibner celebrates after hitting the game-winning single during the ninth inning of a baseball game against the Chicago White Sox on Saturday, May 28, 2016, in Kansas City, Mo. The Royals won 8-7. (AP Photo/Charlie Riedel)

Former Razorback outfielder and pitcher Brett Eibner was called up to the Miami Marlins active roster on Tuesday.

Eibner, who most recently played for the Sugarland Skeeters of the independent Constellation Energy League, had his contract purchased by the Marlins on Aug. 1 and was invited to spring training two days later.

Eibner played for the Razorbacks from 2008-10. He was named a Freshman All-American in 2008, an All-American in 2010, and is known for hitting a game-tying home run in the bottom of the ninth inning against Virginia in the 2009 College World Series.

He was selected in the second round of the 2010 MLB Draft by the Kansas City Royals and made his MLB debut as an outfielder in 2016. After playing in 26 games with the Royals, he was traded to the Oakland Athletics.

After the 2016 season, he was traded to the Los Angeles Dodgers, where he hit .182 with six RBIs and two home runs in 17 games. He was let go by the Dodgers in September and signed a minor league deal with the Texas Rangers the following December.

Eibner was working his way through the Rangers' system as a pitcher when the 2020 minor league season was canceled due to the covid-19 pandemic.

The Marlins have lost three consecutive games and are currently 9-7 this season. They are one game back of the Atlanta Braves for the lead in the NL East.