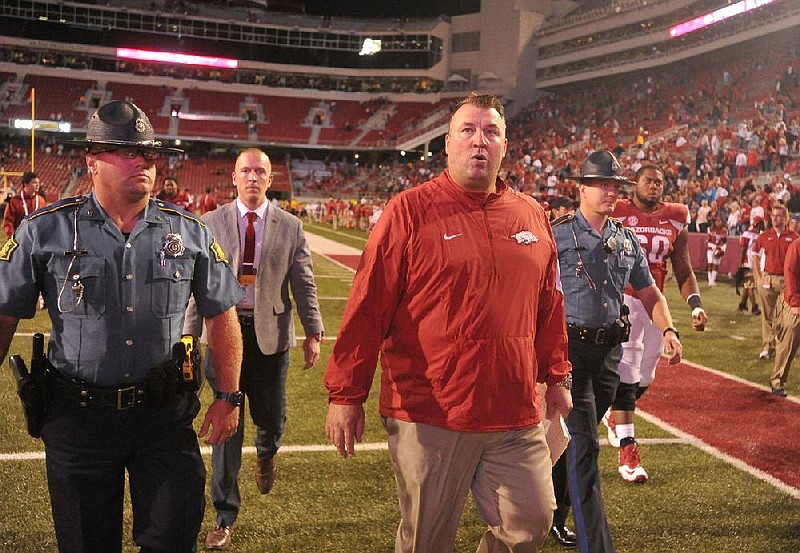 Holmes’ ruling will keep the lawsuit, in which Bielema’s attorney’s argued the foundation broke the terms of its buyout agreement with Bielema and asked for a jury trial, $7.025 million in compensatory damages as well as punitive damages on track for next summer. Holmes has set a preliminary trial date of the first week of June 2021.

The judge’s 12-page ruling will also keep the lawsuit in federal court for the Western District of Arkansas, the preferred venue of Bielema’s lead attorney Tom Mars and where the case was filed.

The foundation argued the intent of the language in Bielema’s final buyout agreement called for any disagreements to be settled in Washington County Circuit Court as his previous contracts had stipulated.

However, Holmes disagreed, siding with Bielema’s argument that the forum-selection controls where the lawsuit is to be heard.

“The question on this motion, then, is what that clause requires,” Holmes wrote. “If the clause requires this case to be heard in another venue, the case must be dismissed without prejudice. If the clause allows the case to be heard in this Court, there is no other identified reason for dismissal on the basis of forum non conveniens, and the case should be heard here, where it has been filed.”

The foundation stopped monthly payments on the $11.935 million settlement with Bielema in January 2019, alleging Bielema had not tried hard enough to find employment that would offset, or mitigate, those payments. The foundation at that time demanded a return of the $4.5 million in payments it had made to that point, claiming Bielema was in breach of the final agreement.

Bielema’s attorneys filed their original lawsuit on June 12. Since then there has been a series of back-and-forth legal wrangling in the case.

The foundation argued the case should be dismissed because the original lawsuit claimed the Razorback Foundation was so intertwined with the University of Arkansas it served as an arm of the athletics department, and if that was the case it would qualify for immunity from lawsuits against the state.

Bielema’s attorneys filed an amended lawsuit on July 2, to which the foundation filed a second motion to dismiss.

Bielema, fired at Arkansas on Nov. 24, 2017, worked as a special advisor and consultant for New England Patriots coach Bill Belichick in 2018, earning less than the threshold of $150,000 which would have triggered the mitigation part of his buyout agreement. He served as the Patriots defensive line coach in 2019 and is now outside linebackers coach and senior assistant for the New York Giants, making a reported $400,000 per year.